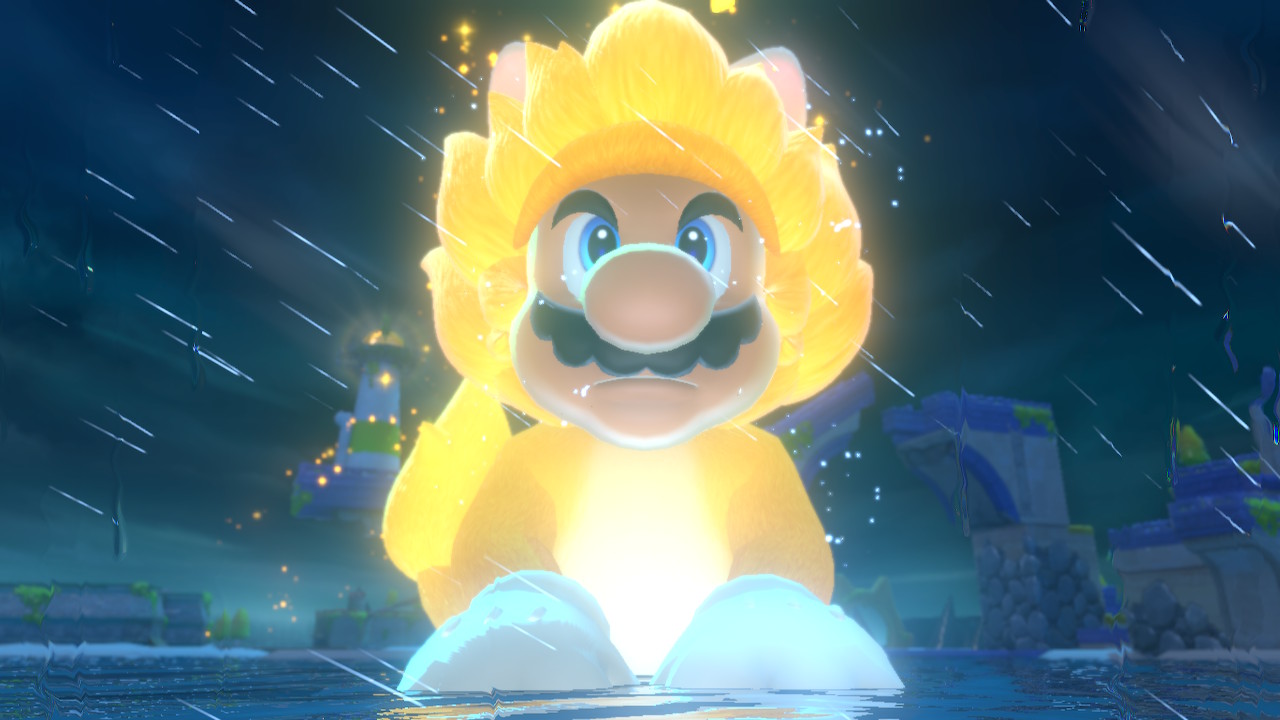 While never reaching the inter-galactic heights of Galaxy or Odyssey, Super Mario 3D World + Bowser’s Fury is a great platformer that provides a potential glimpse into Mario’s future while revisiting the greatness of the Italian plumber’s past.

Super Mario 3D World + Bowser’s Fury is an interesting package. A re-release of the underappreciated 3D World, previously shadow-realmed to the Wii U and Bowser’s Fury, an entirely new, short expansion that utilises 3D World’s mechanics and engine in a small open world.

Super Mario 3D World never allows you to pause for breath. There is such a wide selection of level mechanics, some isolated to just stage that you’re barely given enough time to get used to a level’s rules before you’re thrown on to something else. While this does ensure that you’re never bored, it also means that levels will introduce something interesting that could easily scale in complexity, only for it to never be broached again. 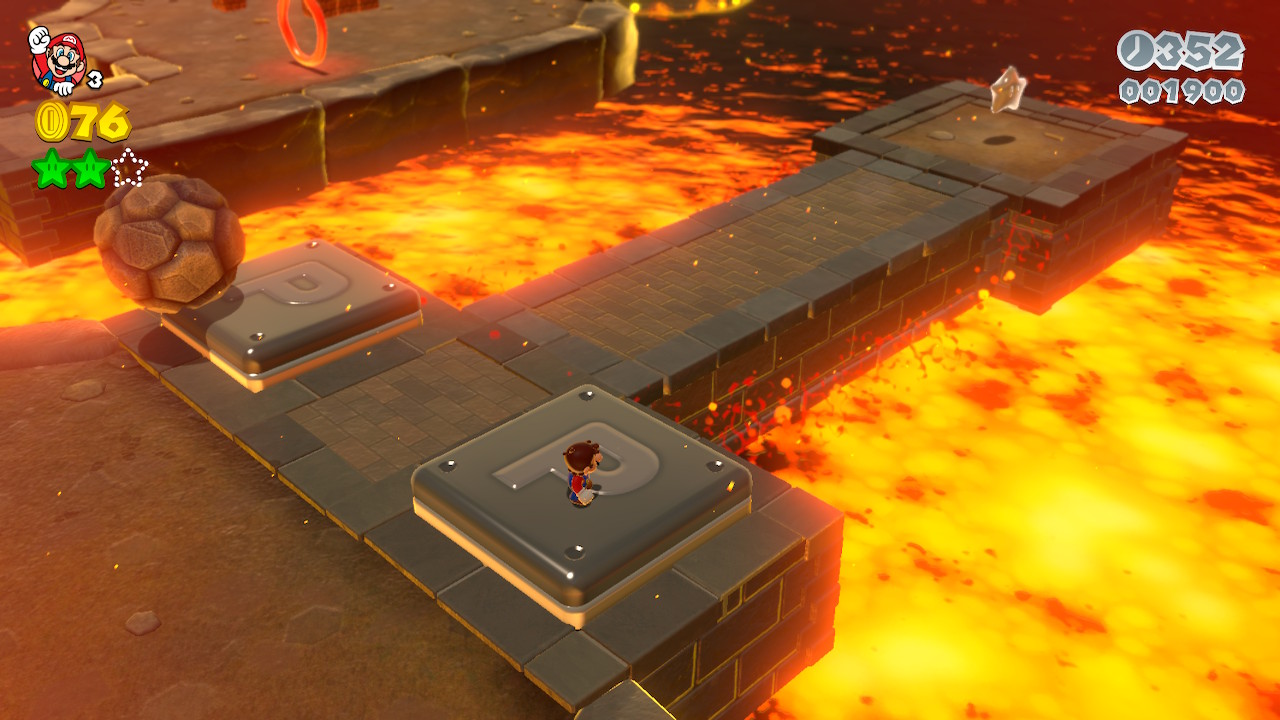 The game controls tremendously as you’d expect, and once you’re over the initial hump of remembering the specifics of just how Mario flings himself off things, you’ll sail through the levels with ease. The most challenge comes from collecting all three stars in each level, the third of which is usually at the end of some teeth-grindingly infuriating platforming that feels amazing to beat, but usually just makes you feel like you’re the worst person to ever play a video game.

There was never a moment playing 3D world that I wasn’t enjoying myself, but similarly, it lacked a single moment of surprise or excitement even close to those found in Super Mario Odyssey or Super Mario Galaxy. It’s extremely good at being an incredibly safe Mario game. Sure, the cat suit makes for some interesting new platforming options but it’s a much more challenging and rewarding game if you don’t use the suit. Platforming isn’t that hard when you can just scramble up the side of things.

Because it’s Mario, I just expect more. No matter what you think of his 3D outings, they’ve almost without fail tried something new every time. The innovation 3D World does bring to the table, a few touch screen platforms and on-rails Plessie levels, feel fairly lackluster when compared to something like New Donk City or all of Super Mario Galaxy. 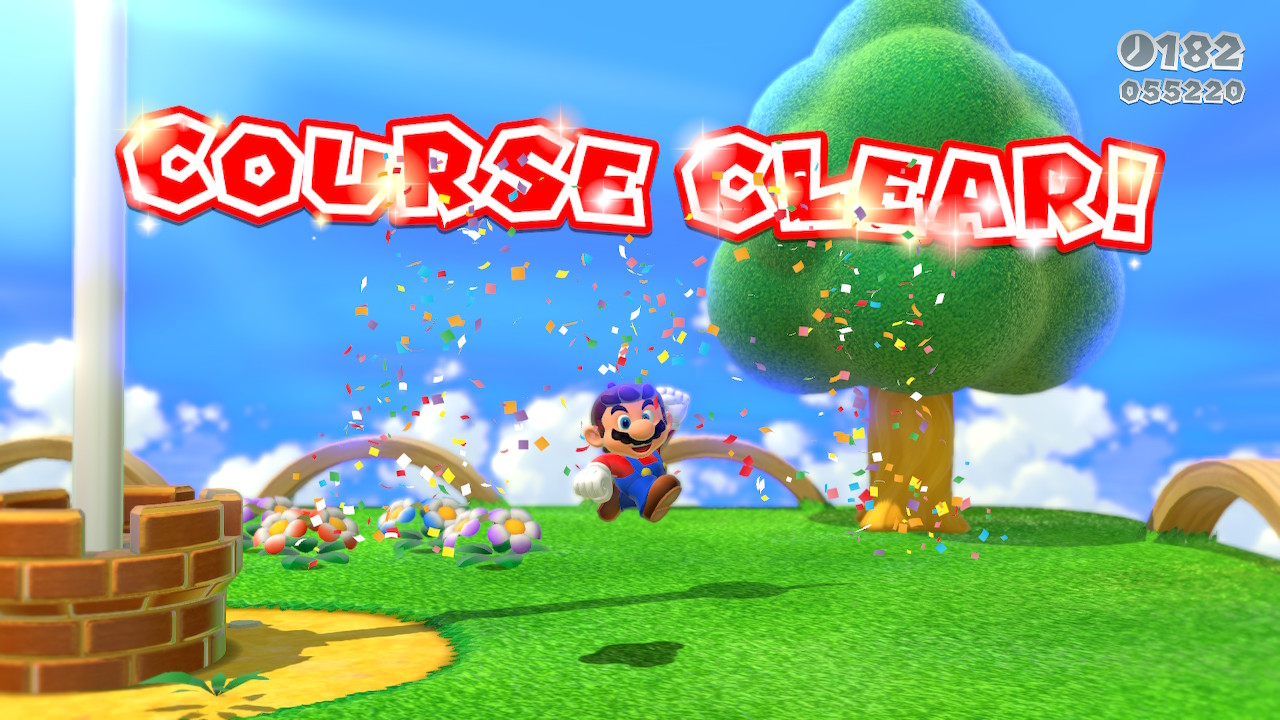 The game supports up to 4 players co-op both locally and online. Setting aside Nintendo’s utterly shambolic network infrastructure, the implementation of online co-op is mostly fine. However if one of your crew drops out from a bad connection or launching their Switch at the wall from frustration, you’ll have to end the session completely to add them back in.

It does quickly get hectic when you and your team have a creative difference over which direction you want to go, causing the camera to anxiously flash before ending the life of whoever is furthest away. On the one hand this does mean less experienced players won’t make it impossible to complete levels, but it does make it difficult to do much more than the most linear path through the level.

Also introduced in 3D World was Captain Toad levels. These occasional jaunts let you play as Captain Toad and navigate your way through a small diorama collecting stars, the challenge being that he can’t jump. This is mainly due to the weight of his backpack, but also the weight of the things he saw in the war that gave him the rank of Captain.

I loved these levels and the theme music is a cheery banger, but there’s not many of them. Clearly plenty of people agreed as the huge headed legend got his own game of these spin off levels a few years ago. 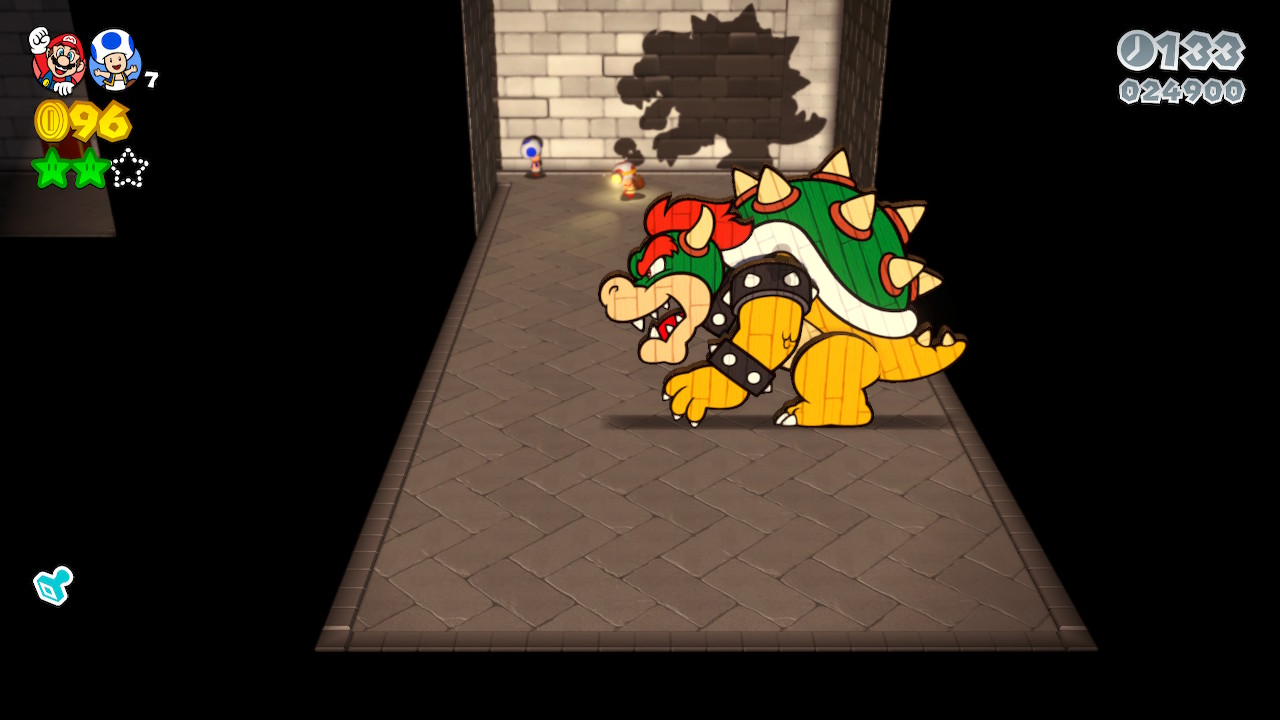 That’s the main diversion in a Mario adventure that’s incredibly safe. In some ways it’s a fantastic first Mario game to play for someone new to the series. The difficulty ramp is incredibly smooth and by the time you finish the game you’ll definitely feel yourself getting better, it’s just a shame that truly difficult platforming sections like the conclusion of Super Mario Odyssey aren’t included for those desiring a substantive challenge.

Bowser’s Fury feels like a strange prototype that runs the gamut of “this is great”  to “oh god I hope the next Mario game isn’t like this” and back again. Broadly, Bowser’s Fury is an open world take on Mario, where the explorable area is made up of several small challenges, each of which rewards you with a Cat Shine. It’s a star basically, but in here it’s called a Cat Shine for some Nintendo reason. The smaller land masses are separated by a large body of water that’s also covered in a black slime thanks to the 900 ft tall Bowser who’s even more raging than usual. 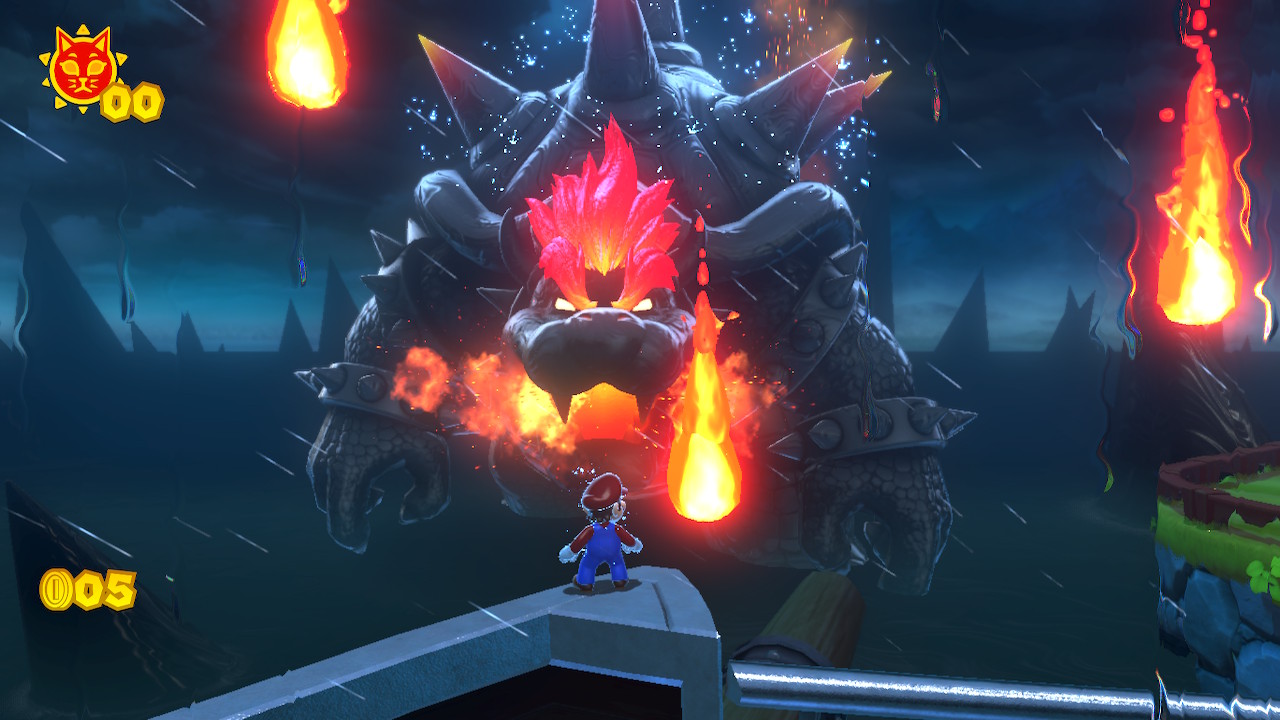 At the start of the game you’re asked by Bowser Jr to sort his Dad out and in order to do so you’ll need to collect enough Cat Shines to unlock a massive Cat Bell and become Kaiju Mario. The first battle between big Mario and big Bowser is brilliant. The rain’s battering down, the music swells, then you run up to him and clumsily slash at him a few times. It’s a great idea, the execution just isn’t fantastic.

That’s true of the world itself. There’s plenty of fun, isolated platforming moments but they’re separated by a boring watery expanse that seems shoved in to make the area seem bigger than it is. The idea of an open world take on Mario is a really exciting one, Odyssey certainly took some steps in that direction, but Bowser’s Fury feels like it has the content of a typical Odyssey world stretched into an area 4 times the size, making it feel empty. It’s not a very long experience and I’m sure that some of the ideas will survive in a more polished form, but what’s there is an oddity that if the man himself wasn’t staring you in the face, wouldn’t feel much like Mario at all. 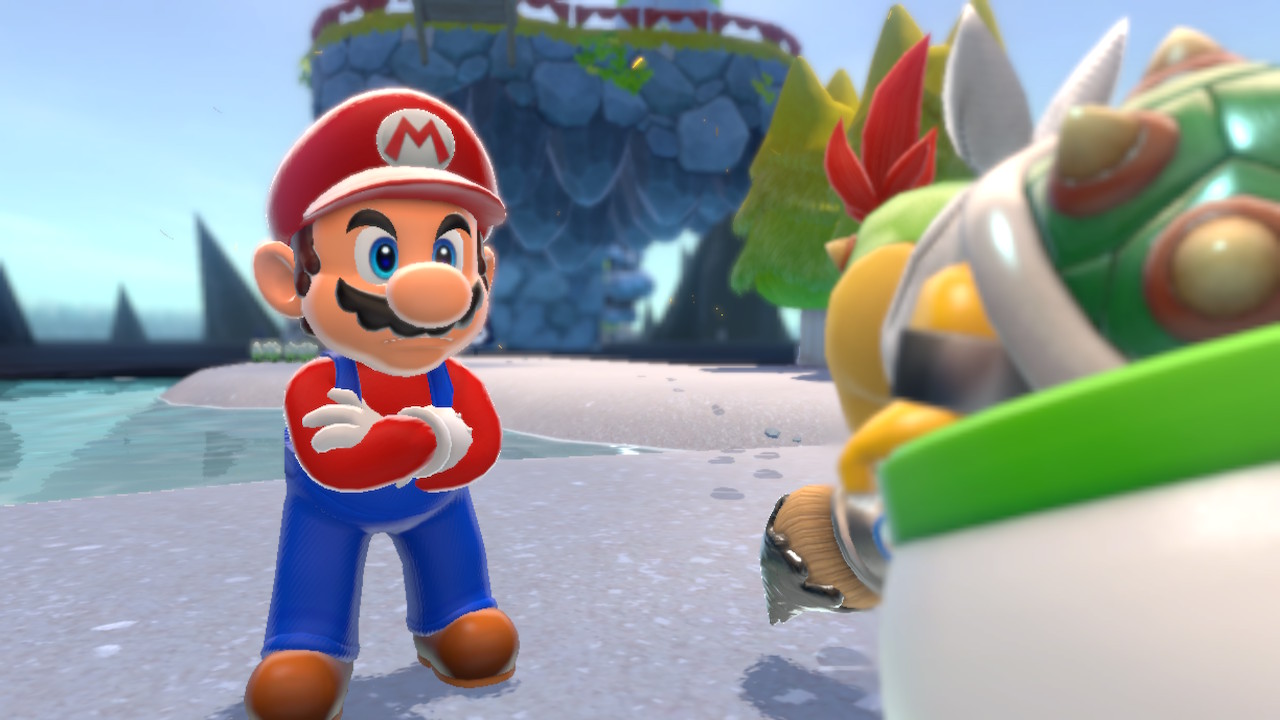 Mario 3D World + Bowser’s Fury is a great entry in the series and I’m very glad to now have an almost complete collection of Mario’s 3D adventures on the Switch (Pour one out for Galaxy 2).

However I think the game was done a disservice by releasing after the 3D AllStars collection. While that package is very bare bones, it contains one of the greatest video games ever made in Mario Galaxy. It’s Nintendo at the peak of it’s creative freedom and willingness to experiment with video games’ patron saint. 3D World never attempts to reach it’s heights in terms of risk, creativity and spectacle. I love Bowser’s Fury in concept and I’m all for Nintendo trying new things, but if this is the direction for the future of Mario, my excitement for the plumber’s next adventure has faded slightly.