I can't fight this Feline anymore 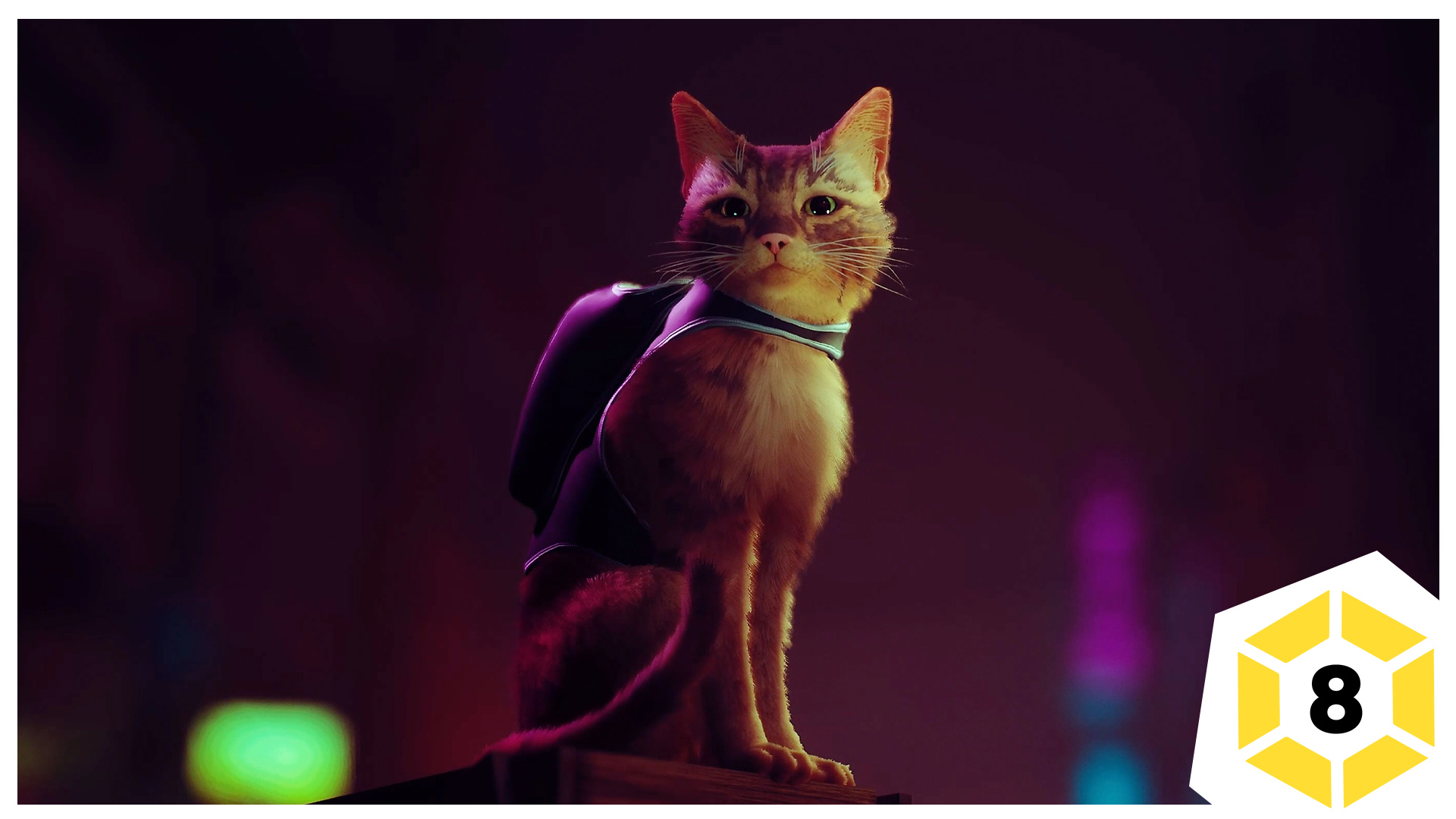 I have never been enthralled with cats.

I know making a statement like that on the internet is sacrilegious, but it’s the truth. They’re very cute, yes, but they make my eyes puffy when  I touch them and they ignore me when I try to pet them (even when I debase myself in public by making the pss-pss sounds).

As a result, when I began my playthrough of Stray, I naturally found myself trying to resist its less than subtle charms. Other reviewers might be enchanted by this transparent attempt at adorable bribery, I thought, but my indifference toward cats will allow me to critique this game without bias. I, of all people, would not be sucked in by this saccharine endeavour to tug on my heart strings.

My resistance lasted a grand total of five minutes. All it took was the closing scene of the opening chapter, and I was more invested in this cat’s journey than I had been in any other video game story this year. 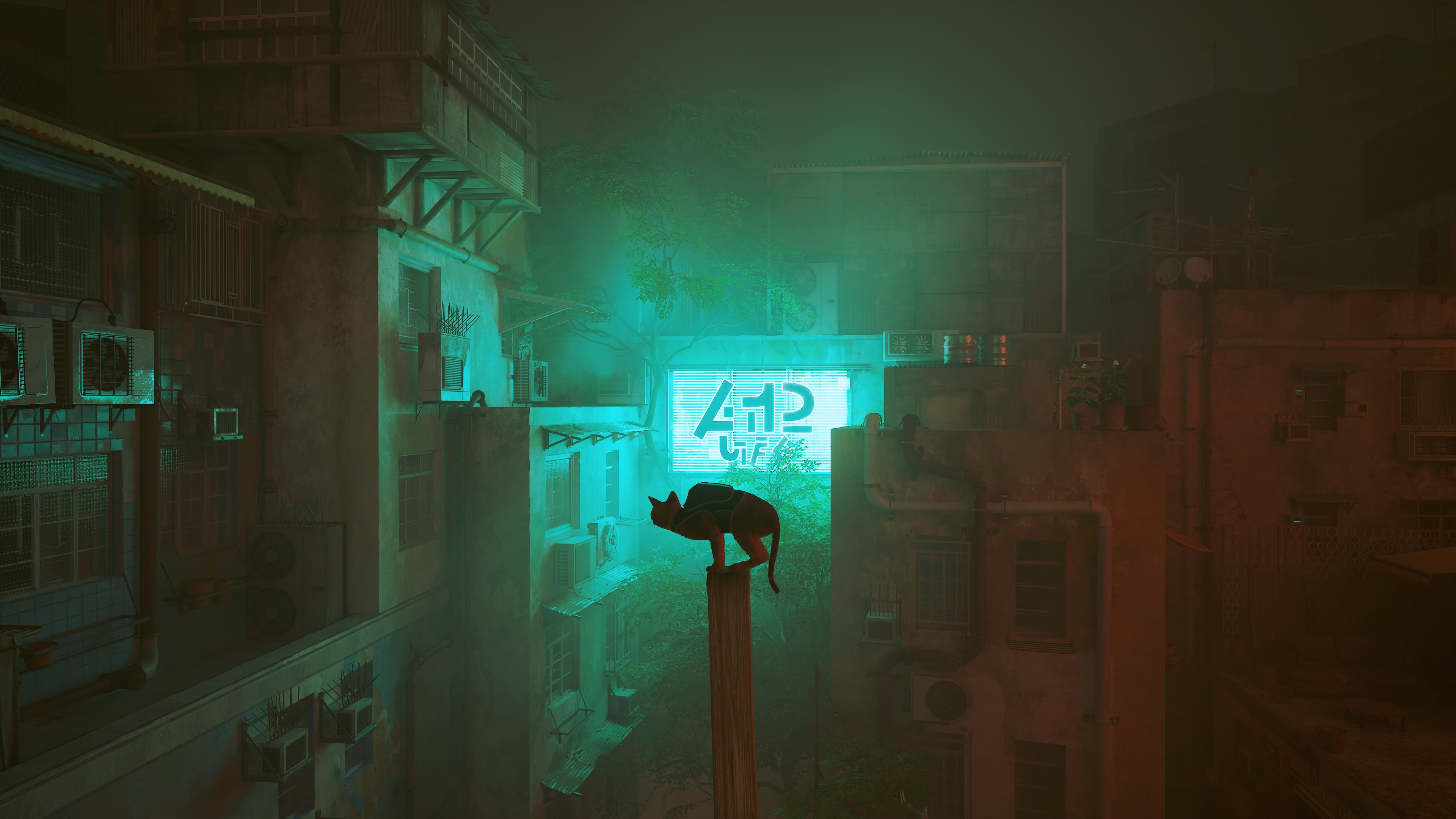 In fact, Stray’s biggest conceit is that it isn’t really even a story about a cat; it’s a story about a  peculiar drone called B-12, who desperately wants to help the robot inhabitants of the walled mega-city he lives in. The story is also bolstered by a fun and instantly likeable cast of supporting characters, whose micro-stories form the glue that binds each chapter of the narrative together.

Even the NPCs, the bulk of which have no more than two lines of dialogue, prove to be fascinating due to robot-kind’s attempts at mimicking their long-lost human masters.

The incredibly detailed environments, reinforced by the endearing art direction, also help to make the modestly sized hub areas feel cosy and inviting. The robot’s obsession with the world that the humans have left behind is mostly shown to the player through their intricately detailed homes and the now redundant yet still frequented shops, such as the bars in which the robots debate their favourite flavours of oil or the hairdressers where they go to get their body parts swapped out.

Stray’s sound design is quite possibly some of the best 2022 has to offer. The score is the perfect mix of sombre and catchy, constantly flipping between the playful music that accompanies your lonely treks through the long-forgotten parts of the city and the lively, ambient-style electronic soundtrack that plays in the busy, communal areas of the chapters. The foley work, in particular, is top-notch, my favourite of which was the impressive breadth of sounds that your little paws can make depending on the types of environments you explore. I spent a frankly embarrassing amount of time walking around on different surfaces, like metal tin roofs or floors covered in wet paint, just to hear how the little pitter-patter of my pawprints would sound. 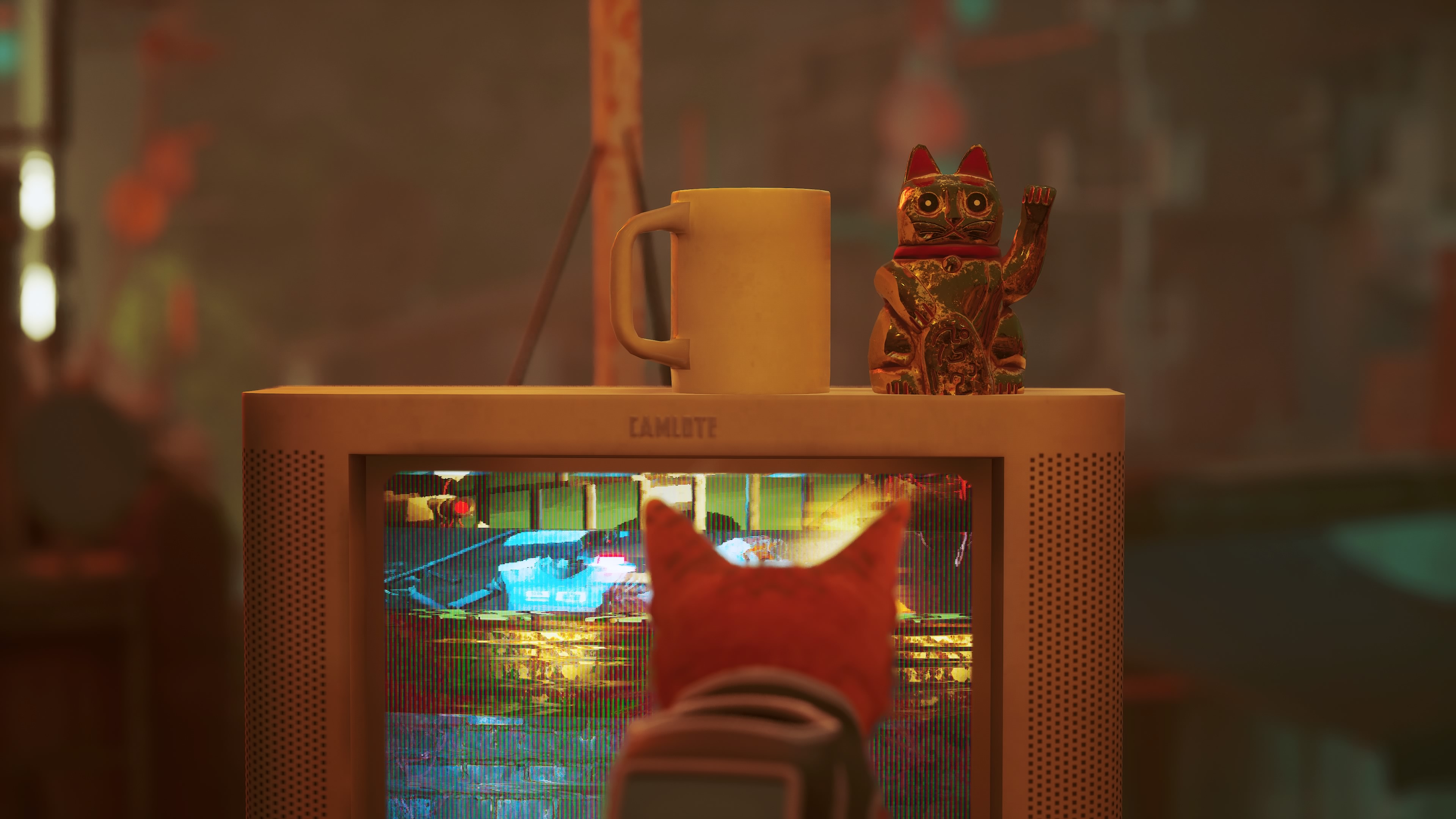 Speaking of wasting time, cat-fans will be happy to hear that a sizeable chunk of the gameplay in  Stray is dedicated to the art of doing absolutely nothing. Players are actively encouraged to spend their time in the game much like a real cat would, allowing you to while away the hours batting around the balls on a pool table or repeatedly stuffing your head into paper bags.

More realistically, however, Stray allows players to take their feline roleplaying to its natural conclusion: by letting you be an unashamedly brazen asshole whenever the whim takes you.  Tipping full paint cans over unsuspecting victims, running beneath pedestrians’ feet to knock them over, and meowing in the face of meditating robots did more to make me feel cat-like than playing with toys or rubbing my face on all of the NPC’s legs. The multiple opportunities you’re given to be a total dick for absolutely no reason go a long way in helping you craft the personality of your otherwise silent protagonist.

The titular stray is extremely simple to control – although perhaps your mileage may vary as to whether or not this is to the game’s detriment. Climbing is performed by hitting a single button, no extra input or direction is required. You can’t accidentally fall, and you can’t overshoot or miss either.

If you can see a prompt to jump you’ll make it without fail. Some may find this a little too uninvolved or simplistic for their liking, but contextually it does make perfect sense. Cats always land on their feet, so this streamlined take on parkour does feel fitting given who you control. 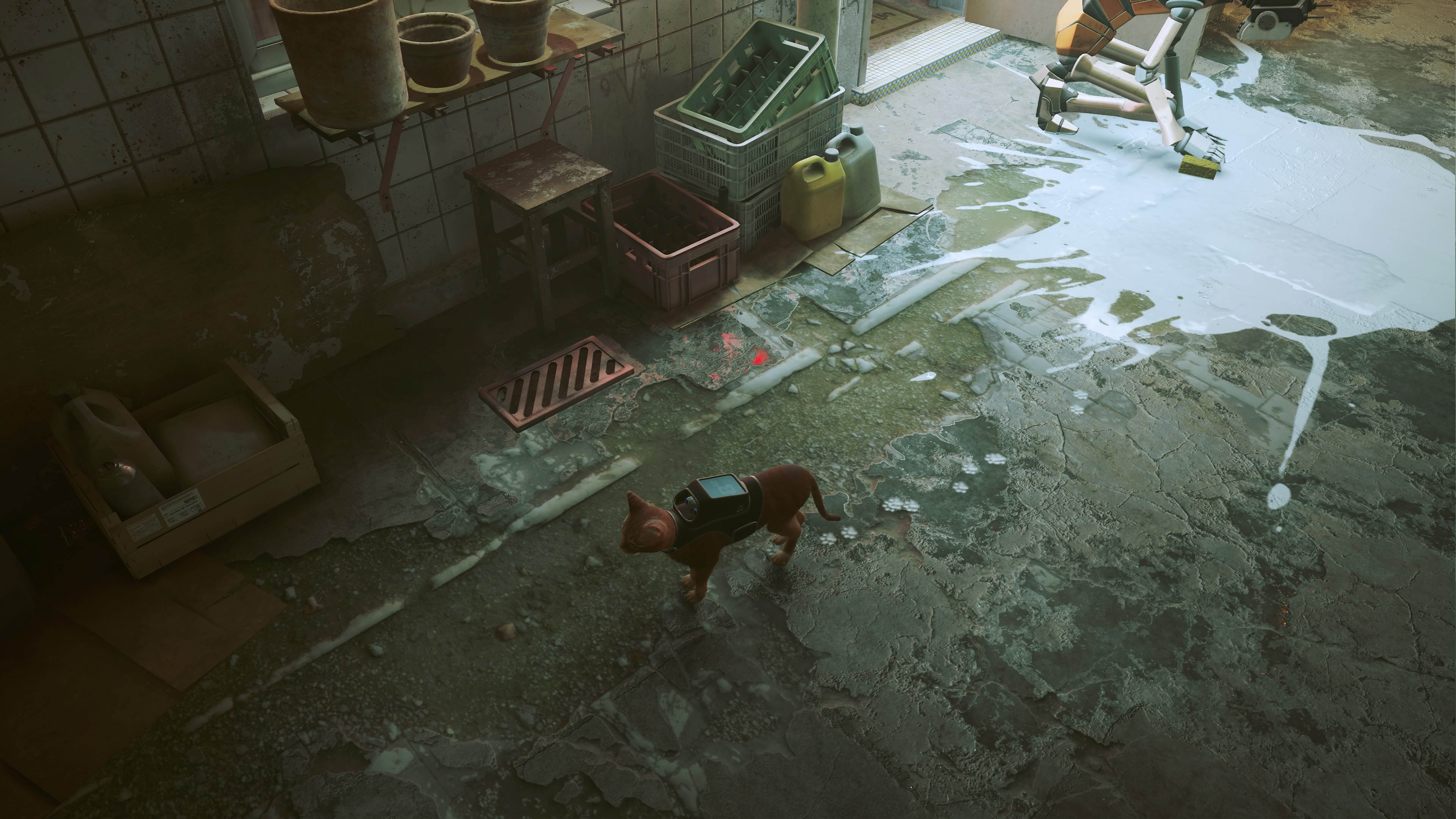 This ease of use doesn’t just extend to the controls, however. Players who love difficult or mentally taxing games won’t find Stray to be much of a challenge. The handful of combat segments, which consist of using your rechargeable torch to fend off enemies, are brief and forgiving, and the chase sections can be completed with relative ease. Even someone like me, who has to immediately resort to guides and walkthroughs when tasked with solving even the simplest of riddles, found every single puzzle and fetch quest exceedingly straightforward. Whilst some will undoubtedly find this disappointing, it’s clear that this focus on simplicity and accessibility was intentional on the part of the developers. This undemanding mentality permeates the entire game, instead letting players focus on the more important things, like seeking out all of the sofas you can scratch, or locating a comfy-looking hideaway for an hour-long nap.

This focus on speedy resolutions and simplicity does have an unintended side effect though, and this is where, unfortunately, the game starts to fall a little short – in more ways than one. Although the tightly written narrative is perfect as is, a single playthrough of Stray will only serve to entertain players for a maximum of ten hours. Whilst there are some side quests and optional objectives players may miss during their first run, these likely won’t take up more than two extra hours of your time. Similarly, there are no real ways to distinguish one playthrough from the next – meaning what you see in your first eight to ten hours of Stray is ultimately what you will get with every subsequent playthrough. There are some additional fun distractions to be had once the game is over, like attempting the “I Am Speed” challenge which tasks players with completing the game in under two hours; but these are few and far between.

Effortless gameplay paired with an engrossing story made playing Stray feel like a breeze, which proved to be a nice change of pace given some of the bloated, needlessly complex 100+ hour titles that I’ve spent the majority of 2022 playing. On the other hand, this brief respite proved to be far too short for my liking – which is both a complementary and critical way of saying that Stray left me wanting more. Whilst there is definitely something to be said for a game that doesn’t overstay its welcome, as it’s certainly preferable to wasting a player’s time by artificially extending its length,  spending only eight hours in the artistically rich and inviting world that Stray’s writers and artists have crafted felt like somewhat of a waste. Nonetheless, Stray is still an incredible experience, no matter your age or temperament, that deserves to played – depending on how much you feel comfortable paying for a game of its length.