The Attitude Era of shlooters 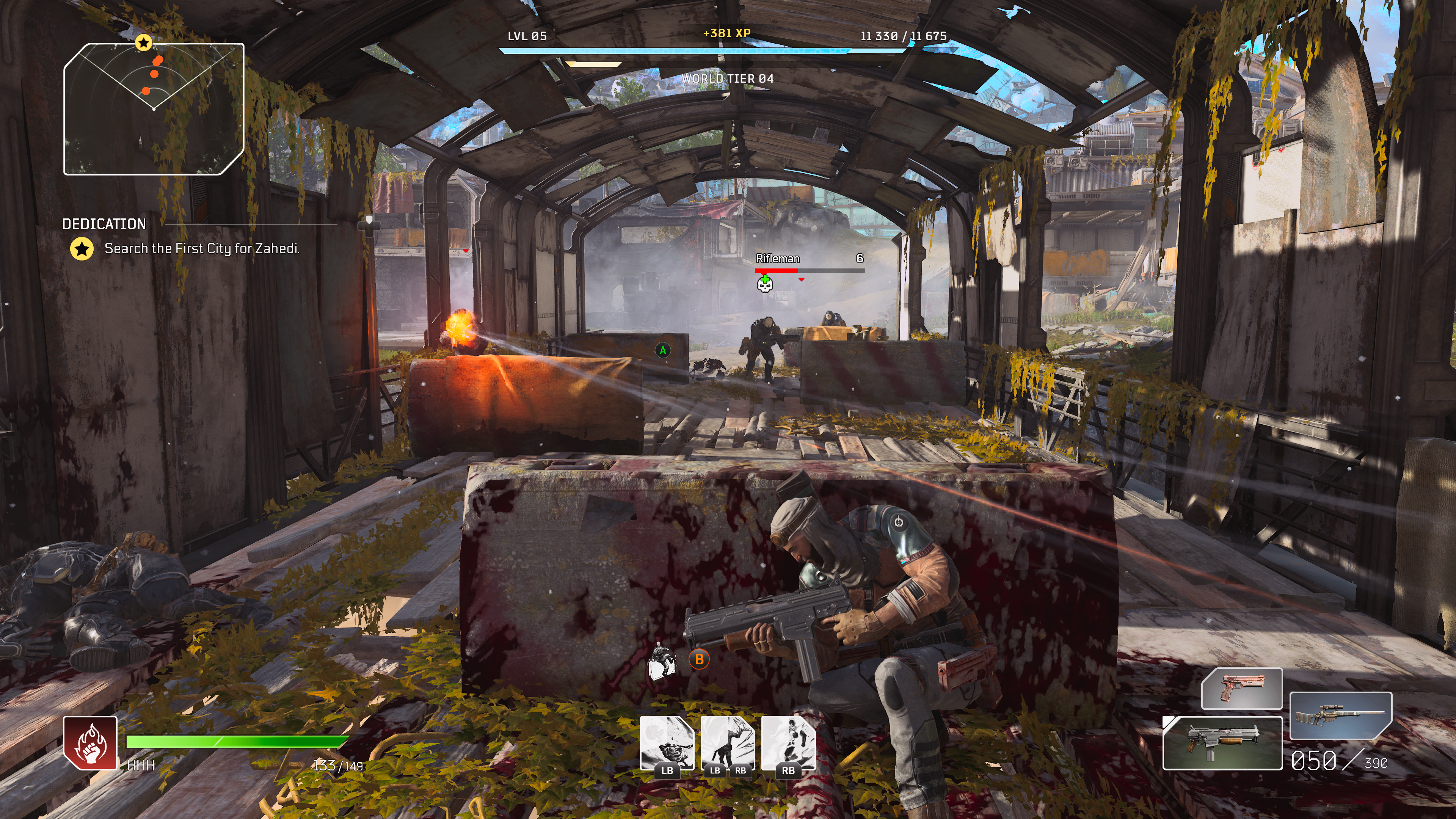 Outriders is a third-person shooter RPG that takes place on a strange planet after Earth has officially been deemed not safe for human occupation. While exploring a planet, your crew uncovers a mysterious signal that leads them to a forest. Lots of explosions, magic and blue lights later, you find yourself “Altered”, a term for those on this planet that can wield powers.

This is essentially the setup for picking your class, the Technomancer, Pyromancer, Trickster and Devastator. Each of these classes has unique abilities, three of which can be equipped at once from a pool of around 10 for each class. It’s in using these abilities that the combat in Outriders comes alive.

Instead of using the ample cover that each combat zone is littered with, your health regenerates by pushing forward and killing enemies. It promotes an aggressive, momentum-based combat style, not unlike the modern DOOM games. You’re always flirting with death, only for your health to shoot back up again suddenly when one of your powers downs an approaching foe.

I played as the Pyromancer, who, as it will shock you to discover, harnesses the power of fire. The abilities I focussed on were a beam that leeched enemies of their health, an explosive blast that coated the ground around me and my foes in ash, making them take more damage, and a huge volcanic eruption that made even the toughest enemies comically easy to take down.

It’s incredibly fun running straight into a group of enemies and unleashing all of your abilities at once. If anything, it made me which I had slightly more maneuverability or that it was possible to exclusively use my powers, as towards the latter half of the game, I was only switching to my guns to pass the time until my ridiculously effective skills had cooled down.

I always felt powerful, but never overpowered. The game achieves this by using a world tier system. Essentially, as you progress, you fill up a world tier meter – this determines how difficult enemies are, as well as the rate at which loot drops. There are 15 tiers, but these higher tiers are clearly intended for groups. I regularly played at around tier 6, meaning enemies were a few levels lower than me, but not so ridiculously difficult that I was atomised upon entering a new zone.

Pre-release, it was easy to compare Outriders to Destiny. They share a similar futuristic art style; you’re using fantastical weapons with military origins, and you’re constantly getting lore shouted at you, but in reality, it’s much closer to Borderlands, right down to the exclamation mark above characters that give you side quests. The quest structure is incredibly generic, go here, shoot a thing. That’s not necessarily a bad thing, you’re really here for the shooting, but some kind of variation from time to time would have been nice. There are a few different side quests such as assassination contracts and large monster hunts, but even those are just travelling to an area and pointing your gun at something. 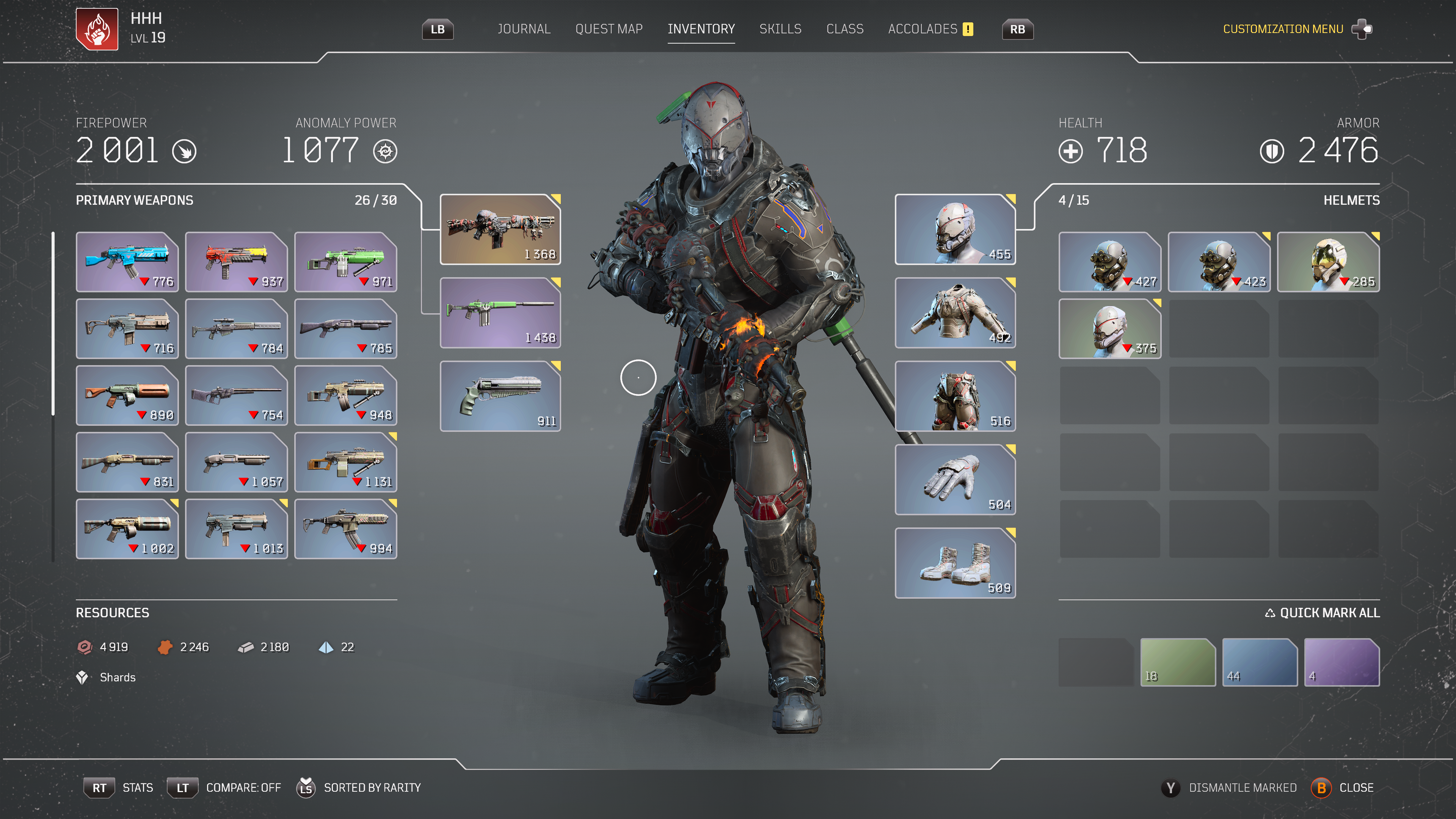 All of this is in service of a plot that is incredibly forgettable. The game often hints at interesting ideas, and the lore surrounding the planet is well established if you look in the right places, but you’ll be distracted by some of the cringiest 2010 tier dialogue I’ve heard in a recent game. At times, your character talks like a 10-year old that’s just learned to swear. Moments are robbed of any meaning because the dialogue is just so clunky, and you as the player character often feel utterly tertiary to events.

The game is clearly built to be played with friends, so in all likelihood, you’ll be shouting over the top of any of the game’s overlong cutscenes, or more likely skipping them.

The game can be played single-player, and the world tier system actually allows a level of difficulty tuning that I appreciated, but for some reason, you have to connected to a server in order to play even in single-player, meaning multiple times during my playthrough, I was kicked from my game, including during the final boss. This is something that will stabilise in time, but it’s a strange decision. It also broke my progression in one instance, but the game accounts for this, you can roll back your story progress incrementally, which is a nice touch. 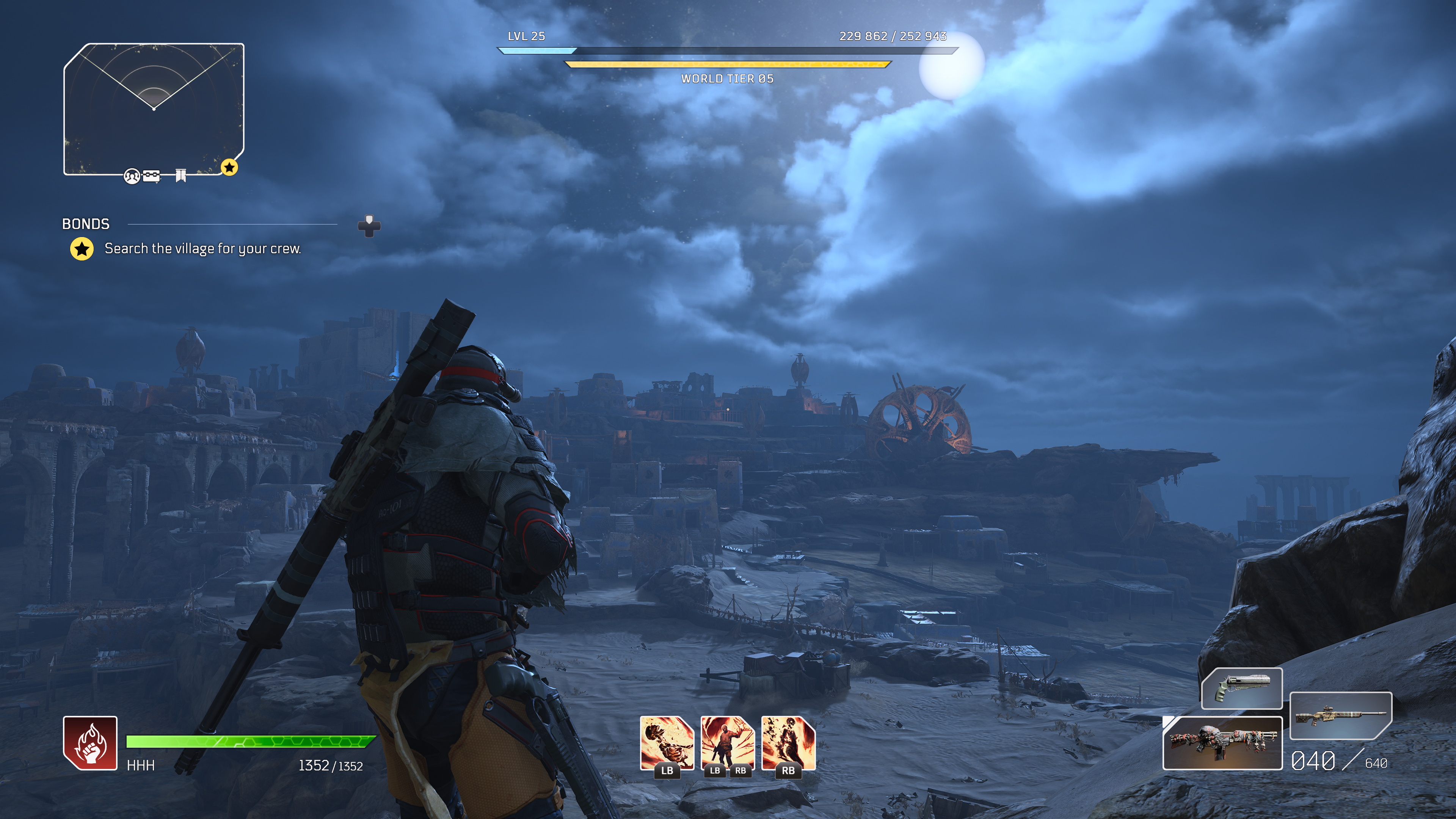 The world of Enoch is extremely varied in its different biomes, but I wish you spent more time in each of them. It felt like I’d reach a new area, complete one mission and then it would be on to the next place. The different regions aren’t as expansive as you’d first imagine, and even require a strangely high level of cutscenes to load between doors, presumably to mask loading times.

While the game runs great on Xbox Series X, I was never overly dazzled by its visuals. There was something distinctly last-gen about its appearance other than its resolution and frame rate. Character models are similarly flat, and in multiple cases, animations broke during conversations meaning the person I was trying to have a serious conversation with was preoccupied trying to stop their gums shaking loose from their skull.

I absolutely love the combat in Outriders. The gunplay and the powers synchronised so well that I was desperate for combat arenas to spawn enemies endlessly, just so I could turn them to dust. It makes me really want to assemble a squad of the 4 different classes and take on some giant beast, a post-game “final Expedition” requiring tier 15 seems to be just that. But, it’s unfortunately trapped in a story that falls incredibly flat, cringe-worthy dialogue and uninteresting mission design.

If you’re a fan of games like The Division 2, something to put on and shoot things while you listen to podcasts or watch YouTube in another tab, then Outriders is ideal. It’s an incredibly weak RPG in terms of story, but from an ability progression perspective and the variety of viable builds you can put together, it’s fantastic. People Can Fly make great shooters. They have made another great shooter. Just don’t play a drinking game where you take a shot every time someone says ‘fuck’. You’ll be in the ground within hours.