Once you go Organic Light-Emitting Diode, you can’t go back 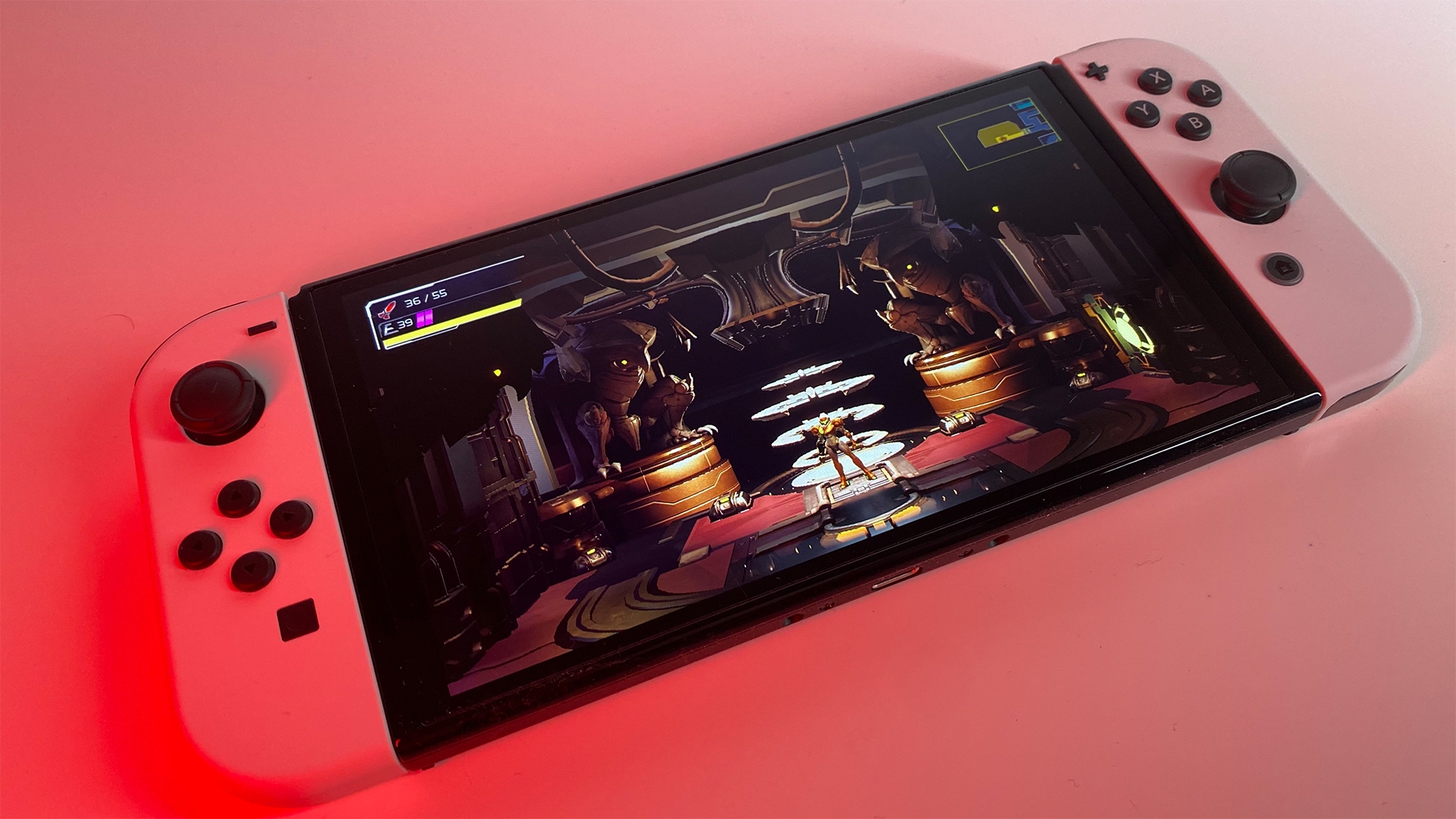 The Nintendo Switch OLED is a great lesson in not jumping to conclusions based on a trailer. On this very site there are videos and podcasts in which I question who this model could possibly be for. In the wake of the rumour of a 4K ready Nintendo Switch, a model that, on the face of it, simply has a better screen seemed like a strange stop gap, and not what I wanted. Then, I saw that “simply a better screen” for myself. I’m very happy to admit just how wrong I was.

The first thing you’ll notice when you play the Nintendo Switch OLED is how colourful it is. The original Nintendo Switch’s screen was fine, but the panel was almost grey, giving most games a washed out look that failed to translate how amazing the games could look on other platforms. Now with the Nintendo Switch OLED, games like Hades, Super Mario Odyssey and The Legend of Zelda: Breath of the Wild regain colour that was lost previously.

The glass panel allows for incredible dark blacks and colours that wouldn’t have been possible on the original Nintendo Switch, or indeed the Nintendo Switch Lite. I was blown away with just how bright it was. I was shocked to learn that the system was only set to half brightness. When I slid the setting to its maximum, it was difficult to perceive that this is in the same family of consoles as the original model., 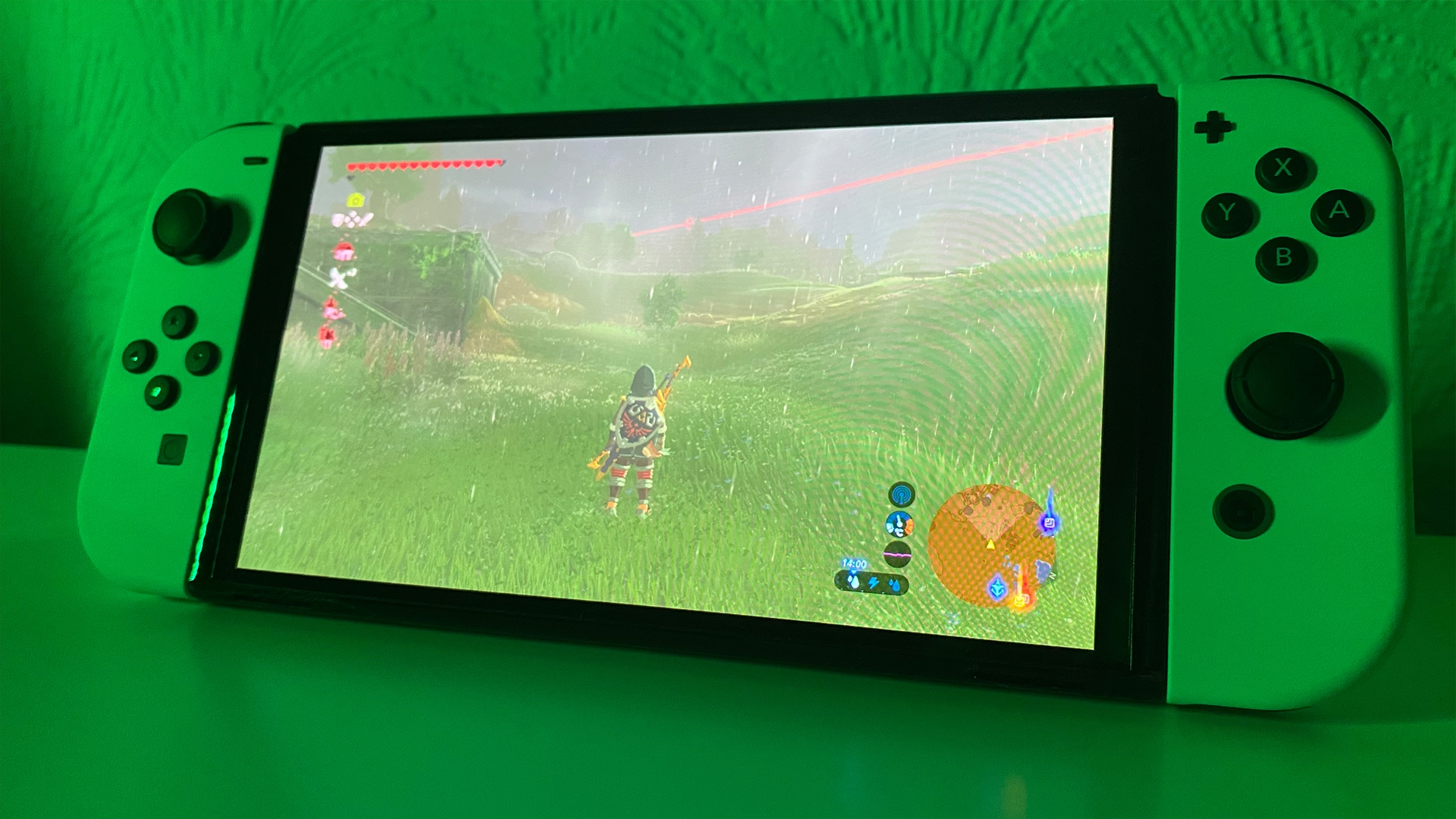 The screen is an absolute fingerprint magnet, and I’d highly recommend getting some kind of protective cover, but that’s really the only fault in a screen that’s so impressive that it’s converted me from someone who primarily played Nintendo Switch in docked mode, to find time to play it handheld. I’m replaying games I haven’t thought about in years, just to see what they look like on the new screen.

Of course, that’s the real factor here in deciding whether or not the Nintendo Switch OLED is for you. If you don’t play your Nintendo Switch in handheld mode now, and it solely exists as a traditional docked console for you, you have no reason to upgrade. The hardware inside the system is exactly the same, and the only real upgrade for docked players is a built-in ethernet port for online play, something conspicuously absent from the original Nintendo Switch. The back plate of the dock is now completely removable, as opposed to the flip down design of the original. I see the advantage to taking the panel off completely, but I felt a few times like I was going to damage it with the amount of force it wanted me to exert. This is something that’ll naturally loosen with time, and is a minor issue. 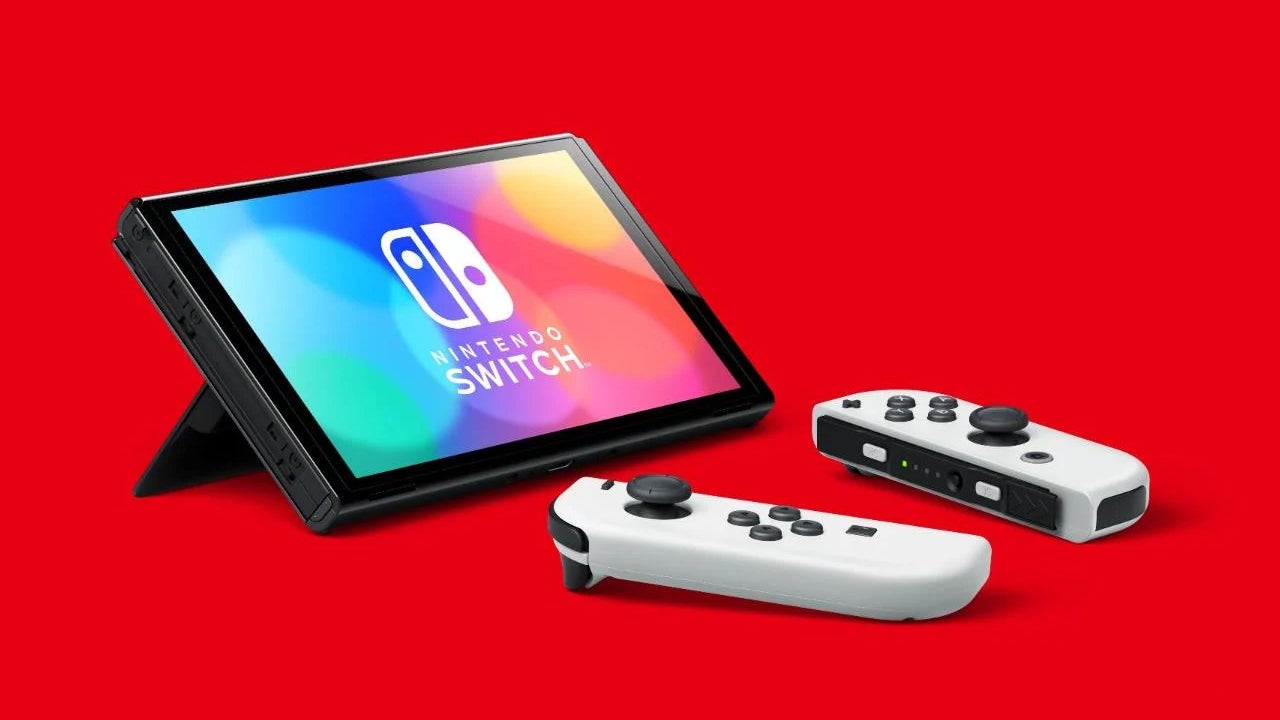 The system comes with either red/blue joy-cons or white, the newest colourway in the ever expanding rainbow of joy-cons. However, if you choose to get the white model, which is clearly the superior of the two, you’ll also receive a new white dock. Now whether you want something that bright in your entertainment center is up to you, but in the era of the 30ft tall PS5 with its white fins, the new white finish does make it look a bit more premium. Unfortunately the joy-con grip isn’t white, also the offset of the black grip and white joy-cons does look nice.

One major issue I had with the original Nintendo Switch has that the rails that attached the joy-cons to the system always felt somewhat loose. From day one, my left joy-con could easily slide out, and even when they were attached, there was a distinctly loose feeling to the system in handheld mode.

Now, with the Nintendo Switch OLED, the joy-cons feel rigidly attached, almost to the point where they feel like they’re a permanent fixture of the system. It makes the whole thing feel so much more premium, a common theme of this model. 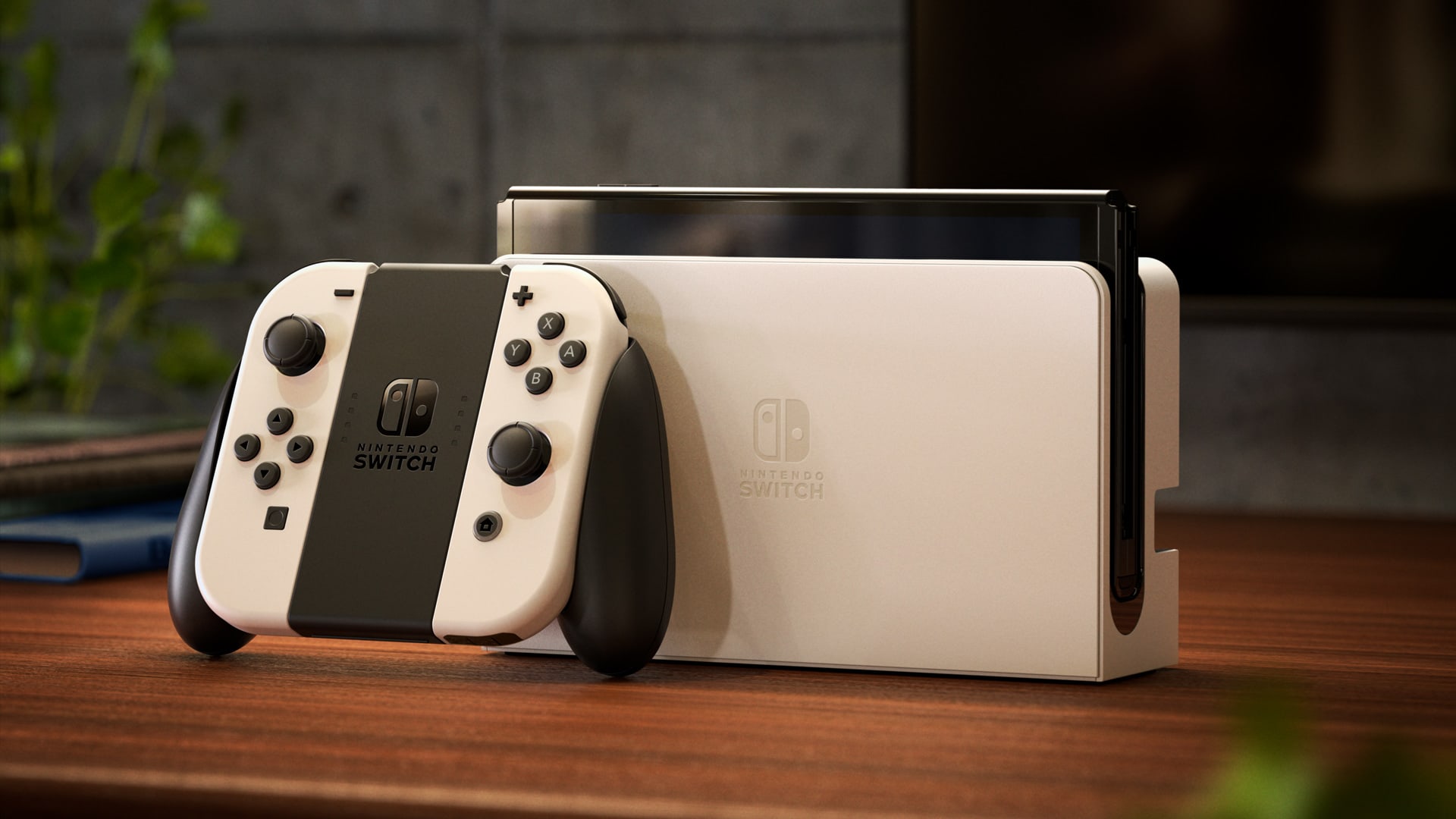 Unfortunately, the joy-cons are still prone to the same issues they’ve always had. You may experience drift, although thankfully I didn’t, and if you’re the type of person that finds the Nintendo Switch slightly awkward to hold in handheld mode for long sessions, you’ll probably also have issues with this model. It’s also worth mentioning that due to the system being slightly larger, some of your old accessories likely won’t support the new model.

The Nintendo Switch OLED also features improved speakers, which certainly sound a lot better than the mid-2000s style mobile phone speakers of the original, but still obviously pale in comparison to a good pair of headphones.

I’m incredibly impressed by the Nintendo Switch OLED model. It’s an incredibly sleek console with a screen that will make it impossible for you to go back to your original Nintendo Switch. It’s difficult to relate just how big a change it is, but if you get the chance to compare the two in real life, do it, because you’ll wonder how you ever played the original. While it doesn’t make the games actually run any better, they look significantly better purely from the injection of colour the OLED screen provides. 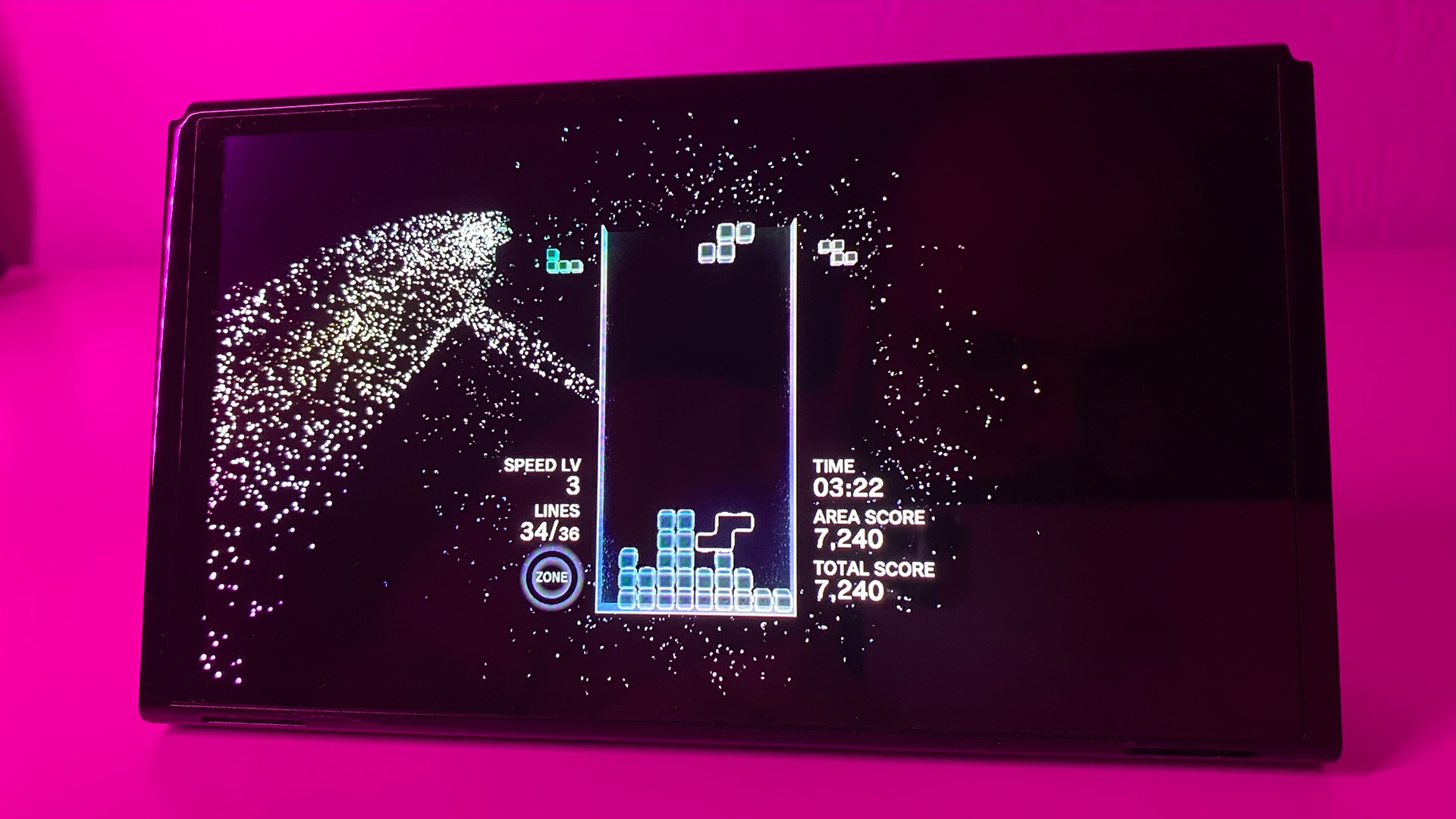 However, if you’re a docked player, outside of a slightly improved dock, there’s nothing here for you. The internals are identical, and unless you’re absolutely desperate for the white joy-cons, a colourway that Nintendo is likely to sell separately in the future, it’s hard to recommend.

But for me, someone who wishes he played his Nintendo Switch more, but always resented how much worse games would look on the handheld as compared to on the TV, I don’t know if I’ll ever dock my Nintendo Switch OLED again.