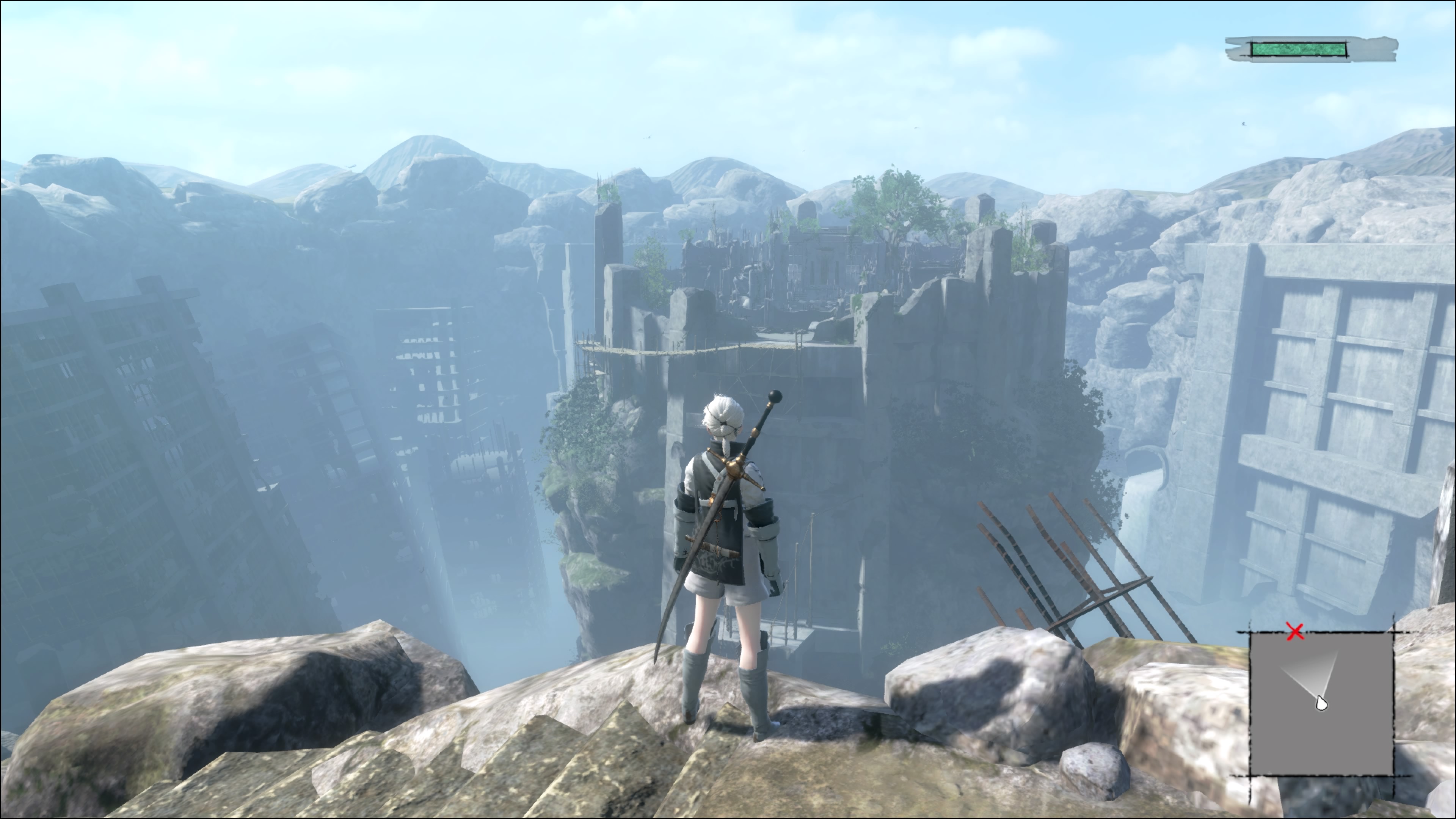 Nier Replicant wants you to believe there’s beauty to be found among tragedy. A tale of friends facing oblivion and choosing to do something about it rather than sit around and wait for the end, Replicant is a deliberate showcase of the worst of humanity, where happiness frequently runs up against horror. There’s tragedy aplenty throughout Nier Replicant, but crucially, there are moments of joy peppered in, juxtaposing the harsh realities of a ruined world to pose questions of existentialism and cynicism for humanity.

Bold as its grandiose storytelling designs may be, Nier Replicant plays out as a pretty standard RPG. As Nier, a young boy striving desperately to cure his sister of a devouring disease, you venture out of a wilderness town to confront the villainous Shadowlord, a journey that’ll take our hero on various quests and deeds of virtue. You’ll hack and slash at mysterious shadowy enemies called Shades to gain XP points to level up, while taking on side quests for townsfolk to solve their relatively trivial problems of finding some mutton or collecting materials to fix a water wheel. Replicant is a fast-paced action game, where you’ll hammer on light and heavy attacks to chain together countless combos, but it’s housed within the shell of a standard, quest-based RPG.

Conventional as Replicant’s RPG structure might be, the 11-year-old gameplay has had a big upgrade. Nier slices up enemies with finesse, dodging and ducking enemy attacks with an upgraded elegance, which is helpful when Replicant throws bullet hell-like scenarios at our hero, tasking him with weaving through barriers of hostile energy balls. Nier’s zany magical abilities, like summoning spikes out of the ground to impale enemies, and literally throwing hands at hordes of Shades in the form of gigantic ethereal appendages perfectly complements its upgraded physical combat to make something that’s genuinely enjoyable to sink hours into. 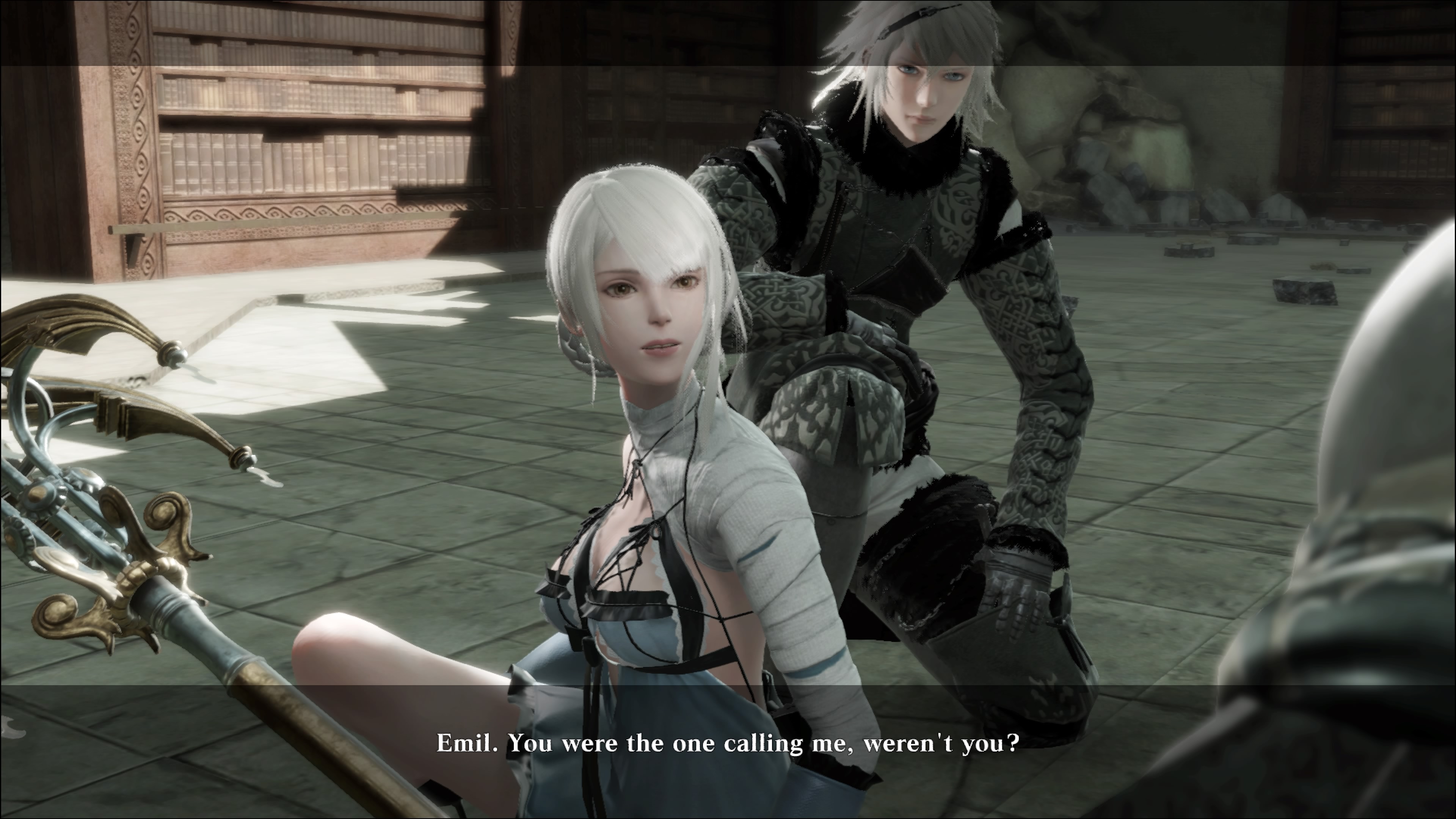 There’s a charm and sublime ease to playing Nier Replicant in the heat of combat. It might not quite aspire to NieR: Automata levels of sophistication, but Automata’s gameplay lead Takahisa Taura is credited as a gameplay advisor here, and you can feel PlatinumGames’s deft hands at work, molding Replicant’s remastered gameplay into something far more enjoyable and smoother than how it functioned a decade ago. Those who played and adored NieR: Automata’s fluid combat won’t feel thrown out of whack by Replicant’s decade-old remodelled combat loop, which adds an excellent new layer through the ethereal magical abilities.

There are moments of genuine brilliance in NieR Replicant’s gameplay, from fighting bosses spread out over multiple building levels and walkways, to just bludgeoning hordes of monsters over the head with a real big sword. Weapons are found scattered all over the ruined world, obtained through quests and just smashing the right wooden box in the right location, but each type of weapon- one-handed sword, two-handed sword, and spear – feels distinctly different to one another. There’s a great sense of urgency to Nier Replicant’s combat, as creatures big and small come careening at you, but you’ll find you’ve always got the tools to deal with whatever baddie you’re facing off against. 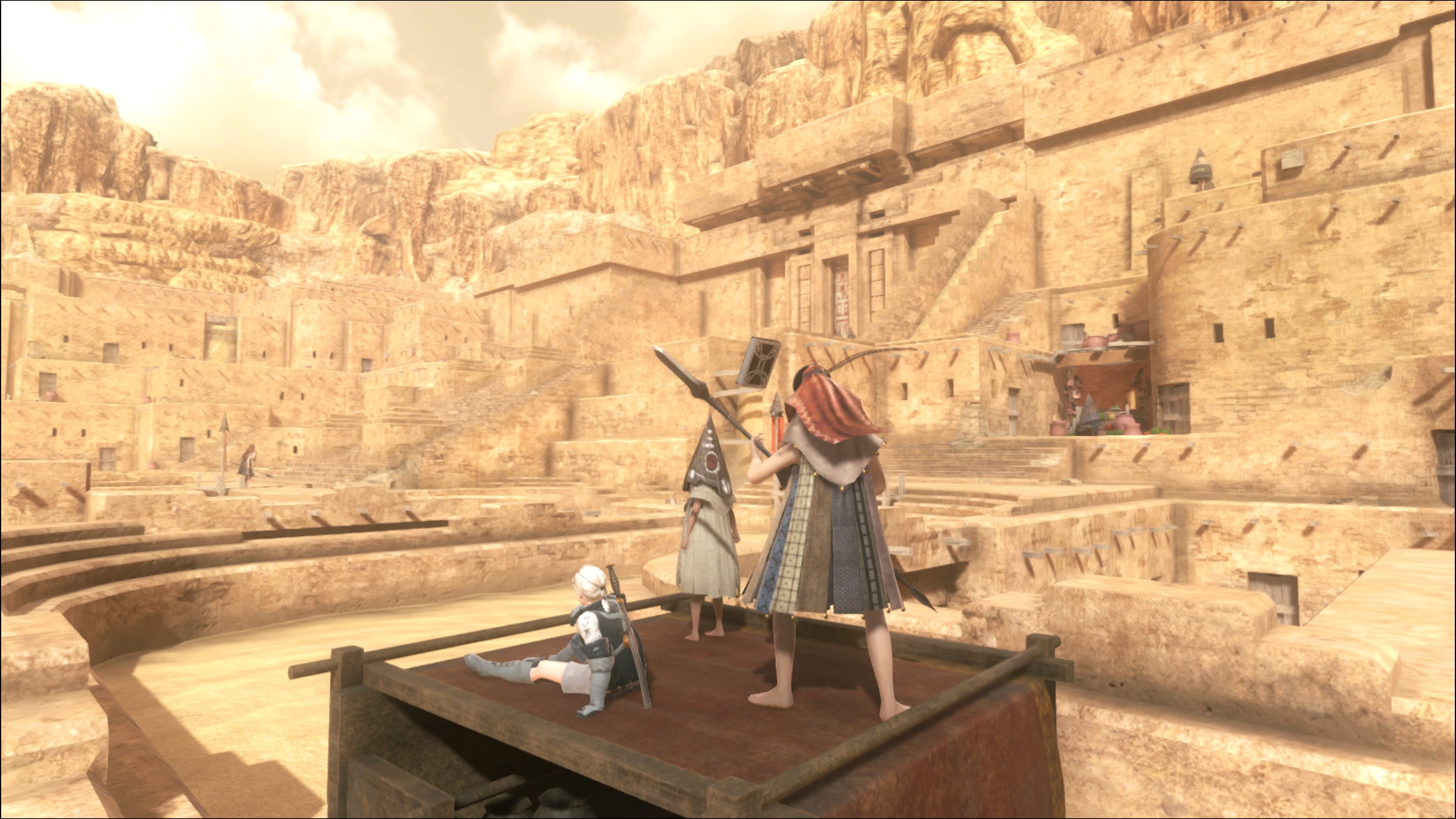 Automata composer Keiichi Okabe throws his musical weight behind Replicant, much to the delight of my eardrums. Okabe’s hauntingly beautiful score was one of the high points of Automata, and he’s very much up to the same tricks here, heralding action and story beats with damn-near angelic choirs. Replicant uses choirs relatively sparingly, often opting for simple and soothing tracks for the village and other settlements, but Okabe’s score really helps make Replicant’s more important story moments all that more memorable.

Another department in which Replicant can very much hold a candle to Automata is the story. As straightforward as Nier’s quest to cure his sister might sound, Replicant’s side characters, and their engrossing stories, make this a tale to remember. Kaine is an ostracised intersex woman, shunned and hated for being part Shade, while Emil is the subject of brutal human experiments, as his eyes turn anyone they see to solid stone. Nier Replicant is very deliberately a story of outcasts and “freaks,” originally created by writer Yoko Taro as a study of human nature in the aftermath of the 9/11 attacks and subsequent invasion of Iraq, and the result is a gripping narrative of hope, hatred, and cynicism. 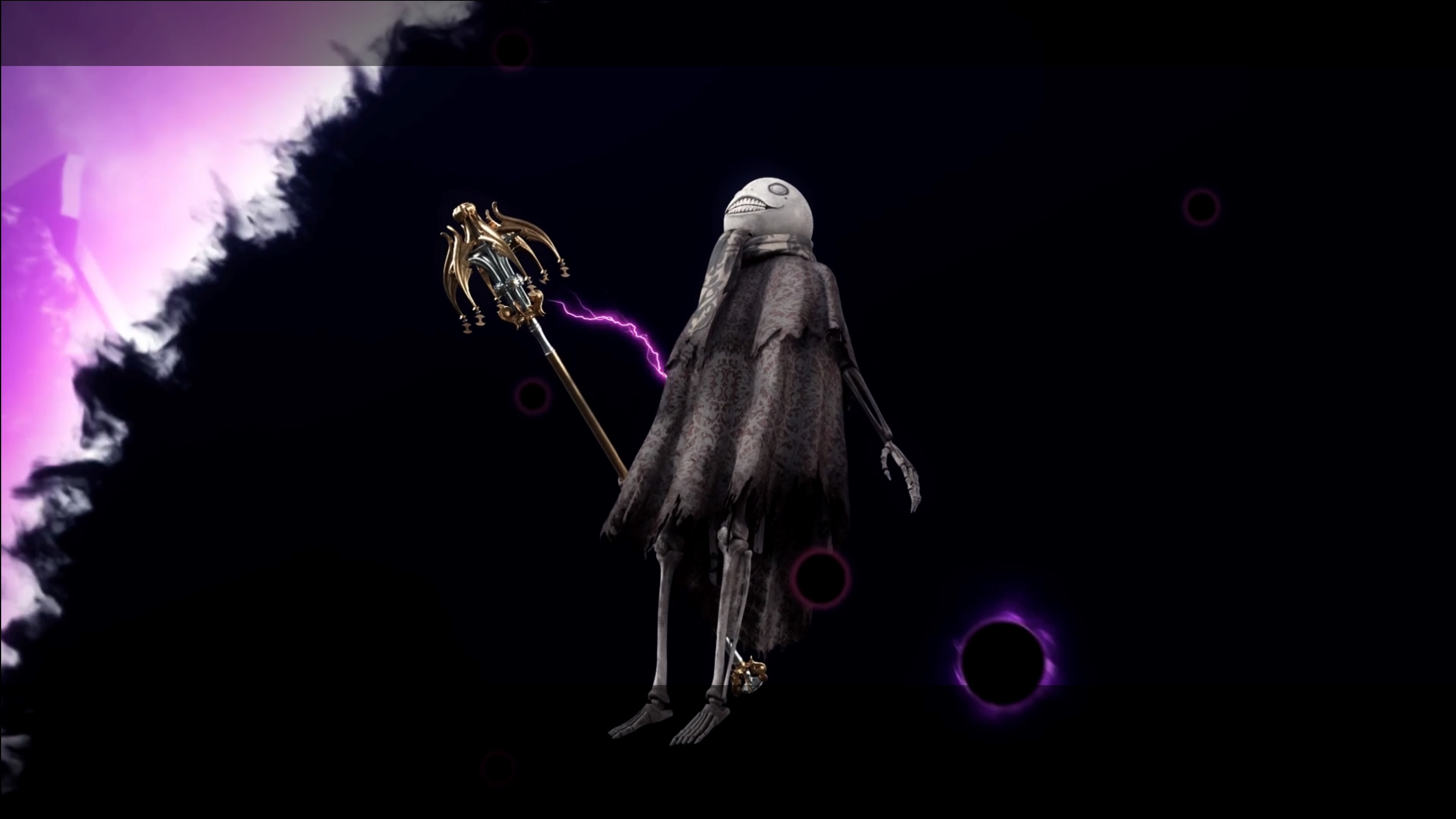 Repeated playthroughs also reward us with deeper dives into each character. NieR: Automata might have been partly famed for taking repeated playthroughs to “complete,” but it was NieR Replicant in 2010 that began this trend, asking the player to complete the back half of the game upwards of four times for the true conclusion of the story. Crucially, each repeat playthrough brings a different viewpoint for the same narrative: the second playthrough lets you hear what Kaine’s Shade is saying, as well as the voices of all the Shades you fight and slay. It’s a relatively simple but brilliant narrative twist, offering you new viewpoints that’ll make you cringe with horror for your past seemingly do-gooding deeds.

It’s also these repeated playthroughs where NieR Replicant’s pacing becomes slightly undone. The original game didn’t exactly have an endless budget in 2010, and so Replicant’s repeated playthroughs ferry you back and forth between just a few locations which, as even your snarky companion Grimoire Weiss cheekily notes, can stretch your patience pretty thin over the 30-plus hours it’ll take to see Replicant’s final ending. However enthralling the narrative revelations might be in repeated playthroughs of Nier Replicant, it can become a little bit tiresome to fight your way through the Lost Shrine against the same enemies for the tenth time, or sprint between your village and the town of Seafront to track down that same missing postman again and again.

NieR Replicant’s story was the high-point over a decade ago, and it remains that way in 2021 for ToyLogic’s impressive upgrade. Kaine, Emil, and the narrative arcs of other companions really do make Replicant’s story one that’ll stick with you, however many playthroughs of slicing and dicing the same enemies in the same locations it might require. The way Replicant unwaveringly shines a spotlight over the failings and misdeeds of humanity means there’s nothing else out there quite like it, and with this new overhaul 11 years later, NieR Replicant’s improved combat is finally standing up to its incredibly bold narrative ambitions.

Hirun is a freelance writer based in the UK, writing about the latest news and delving into community stories for Gamesradar, as well as guiding ongoing games for Eurogamer, Fanbyte, and more..