Not featuring the voice of Marlon Brando 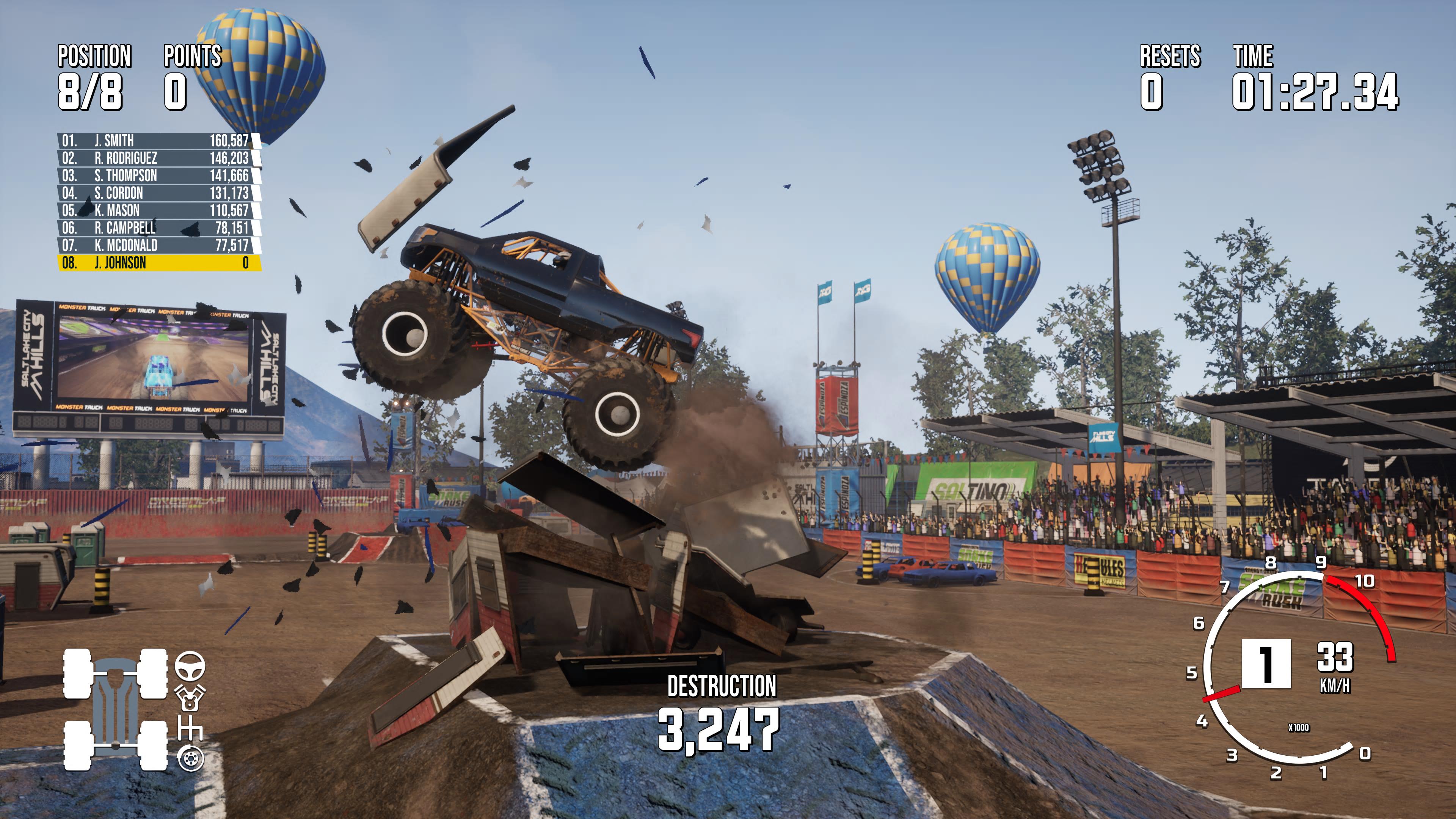 There’s a very human pleasure in seeing a big car crush small cars. It’s a satisfying level of violence in which no one is actually hurt, but the noises are loud and if you’re lucky, you might see something explode. That’s the sales pitch for the actual sports entertainment that is monster trucking.

I’m not a dedicated fan of the sport myself, but in the same way that you’ll watch a highlight reel of great boxing knockouts, seeing monster trucks do their thing is a base pleasure. The thing is though, it’s a pleasure that gets old after a few seconds, so how are you going to make a game out of it?

In Monster Truck Championship, your adventure is primarily divided between racing, destruction and “free style” which is also basically just destruction. 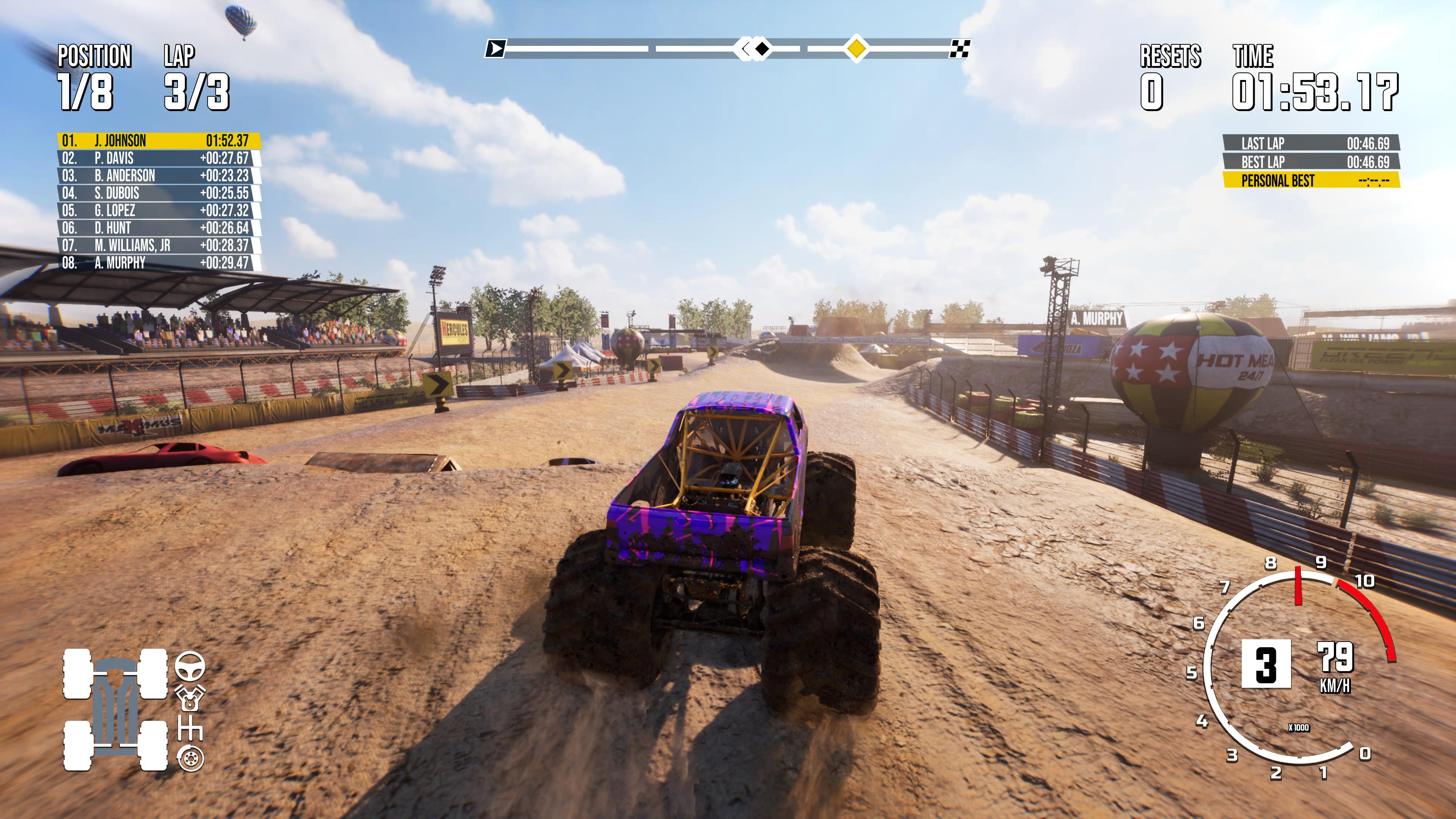 You’ll play through a series of events, usually featuring one each of the event types, in order to win cash and upgrade your truck. There’s no real overarching campaign, in fact, the game didn’t even acknowledge when I completed the final event in the list. There’s also a massive lack of variety in arenas, meaning you’ll be playing in the same environments during event one as you will during event 30.

This comes to us by way of publisher Nacon, the same team that brought Werewolf The Apocalypse: Earthblood into my life, so Monster Truck Championship immediately earns the honour of the best Nacon published game I’ve ever played, an achievement they’ll surely hang on their wall.

Actually driving the trucks is a lot of fun. Each stick controls your front and rear wheels separately, so there’s actually some skill in getting sued to turning with both sticks at once. At first I despised this as I wanted it to control like Forza but with big cars, but when I actually spent the time to learn it, gliding round the corners in this deathtrap became oddly satisfying. 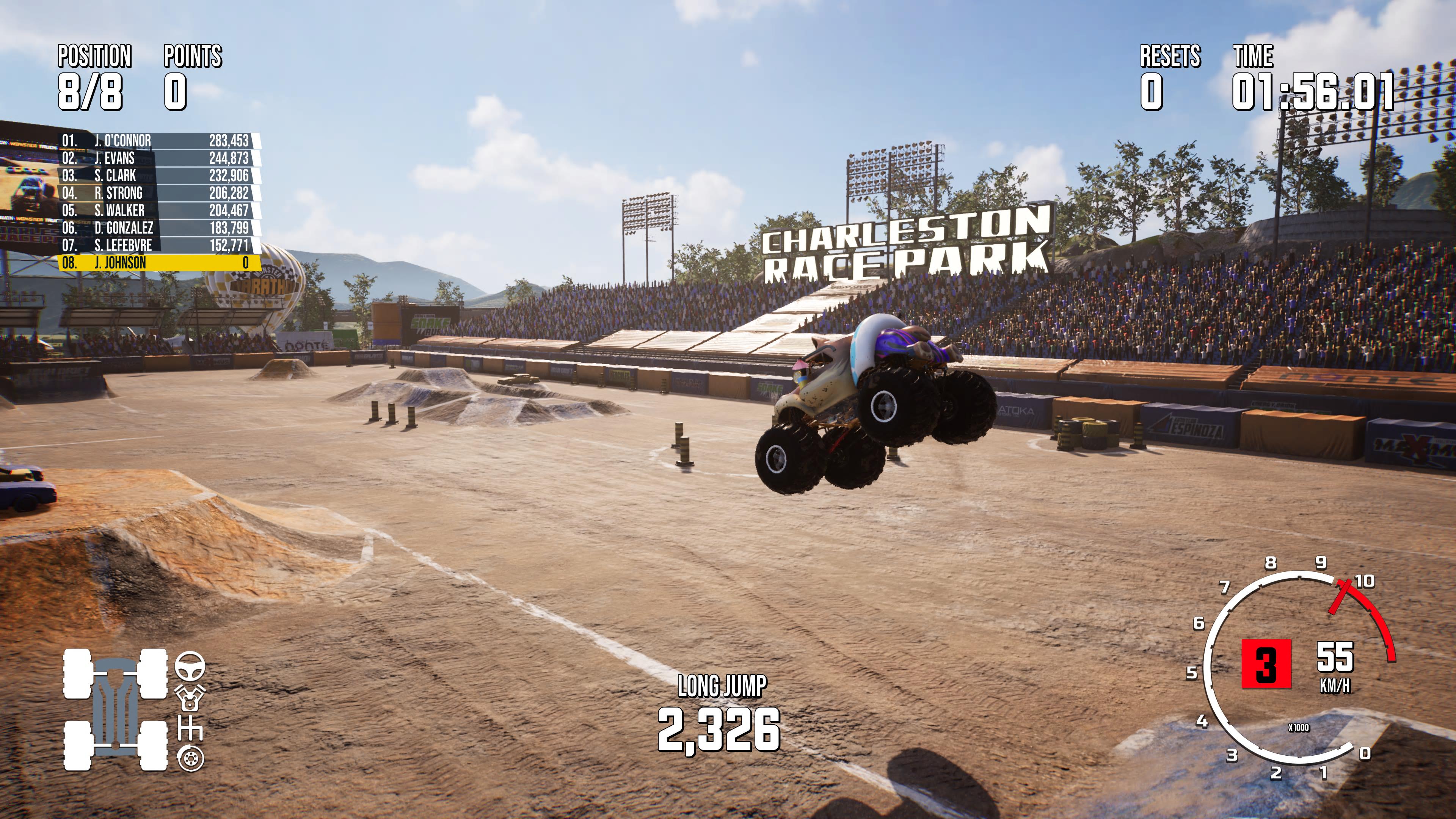 Races are incredibly easy, with the AI only just about remembering to follow the track round to its completion, although I did have a few moments when a rogue competitor had ideas above their station and knocked out some of my trucks body work, impacting the handling.

Honestly, getting a load of friends in a big race and just battering each others trucks to pieces seems like it would be a lot of very stupid fun, and I have a lot of time for that.

The main event is the destruction events, these are where the tricks come out and the various assembled caravans get atomised. The trick system is surprisingly fleshed out with a Tony Hawk’s Pro Skater like combination chain. The destruction arenas are weirdly empty of objects to actually destroy though, so often you’ll find a good combo is ruined just because you’re too far away from the next thing you want to turn into dust. 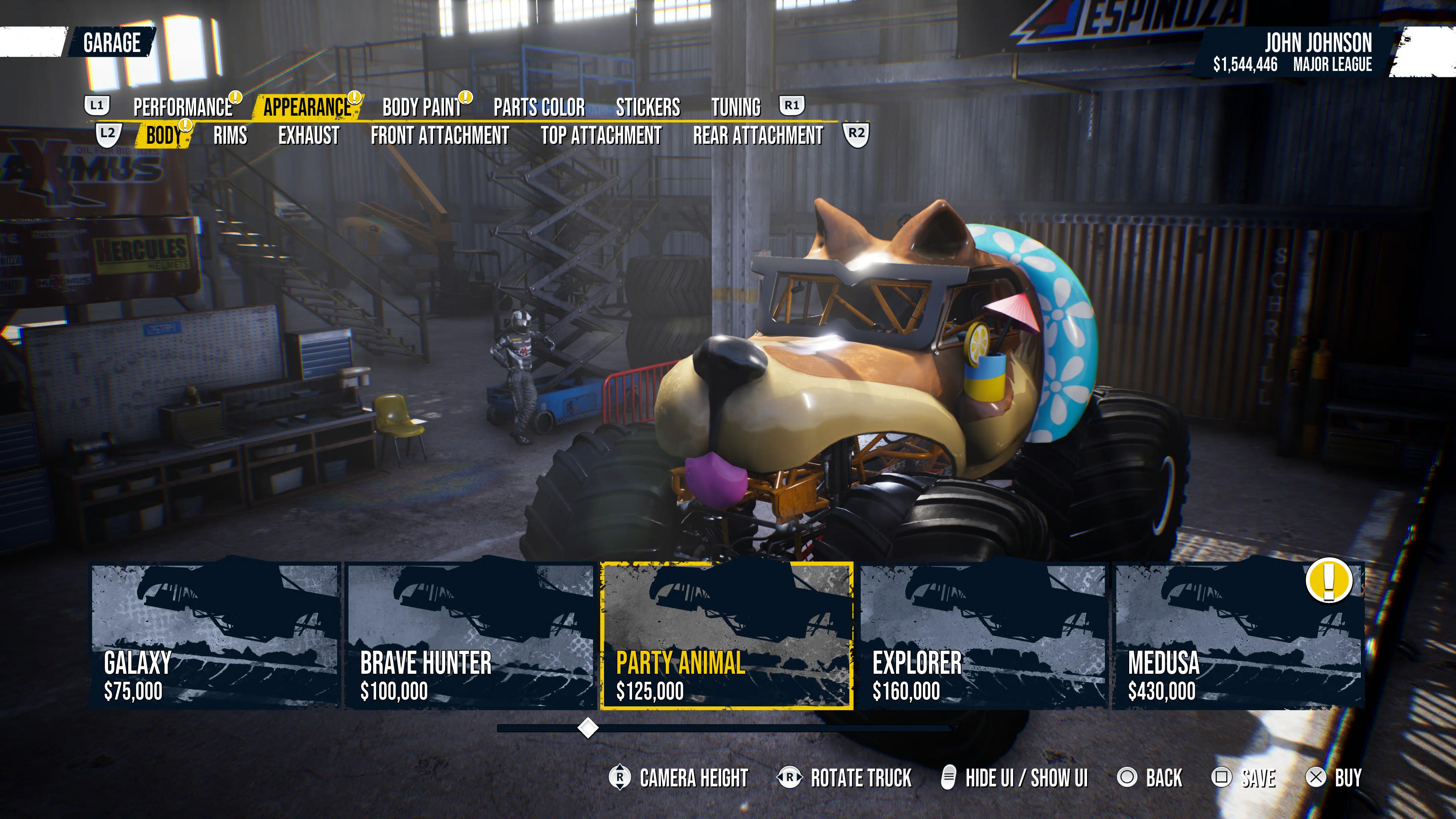 This was another case where I found myself easily dominating my competition and I don’t think it’s because of a preternatural ability to flip my truck over some cars.

A few of the tricks like wheelies and bicycles (driving your truck on either it’s right two or left two tyres) are a bit inconsistent in how they are tracked, so I found myself going for the tricks I could reliably hit, for example, front flipping into someone’s old caravan. That might sound a bit basic but I laughed every single time it happened without fail.

The truck customisation allows for some entertaining variety, for example you can drive about as a huge toaster, but that levity is sadly missing from the rest of the game. I’d have loved some weird tracks, shoot me out of a cannon, let me jump off a 1000ft ramp, anything that isn’t puttering around a dirt figure 8 for the 10th time in a row.

I finished most of Monster Truck Championship in one sitting, it’s not a long game, but it’s oddly engrossing. I just found myself playing more and more events in a row, just to see my truck smash into something else. I’d have preferred if there were no races at all honestly, I just want to cause havoc. 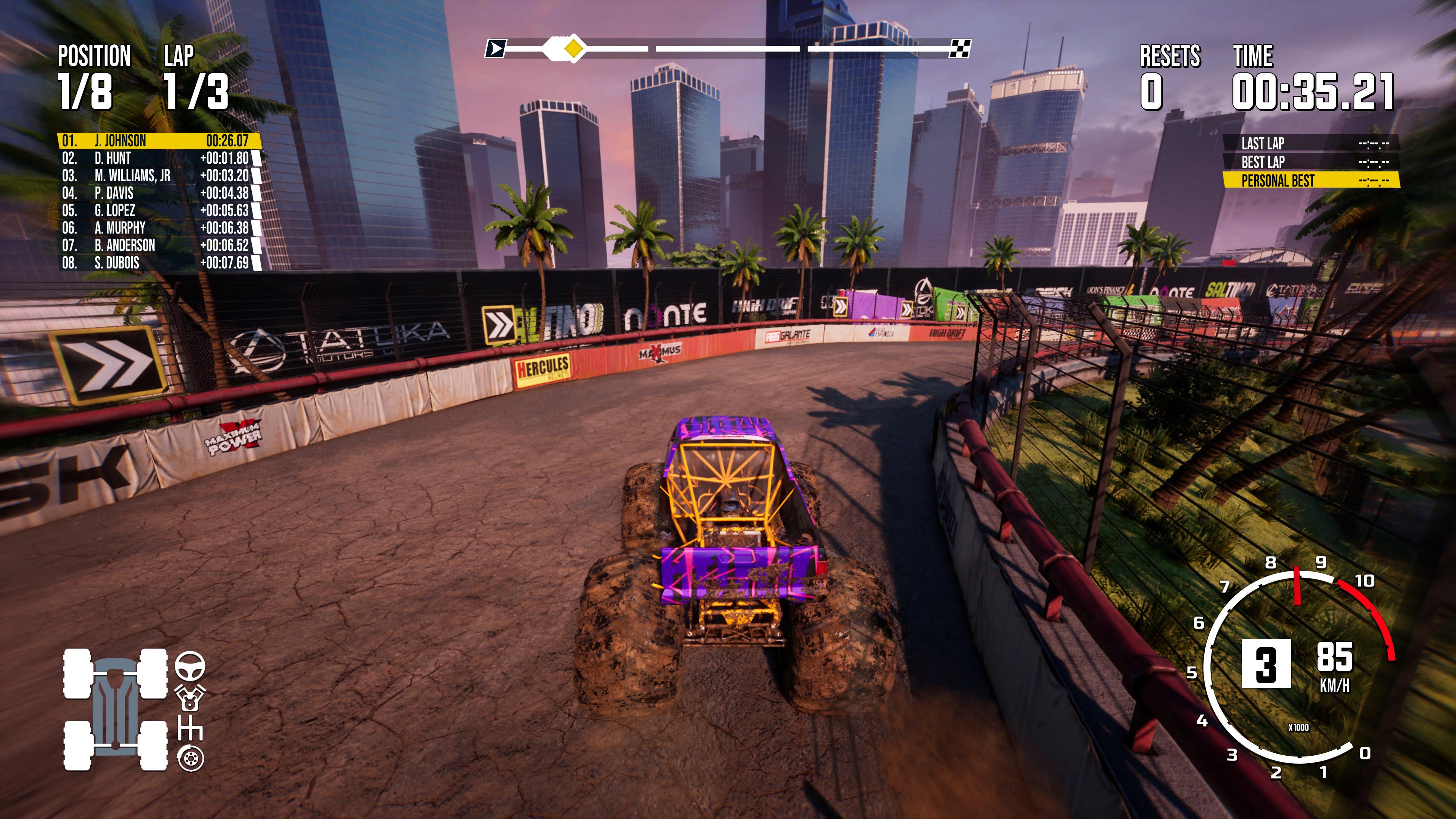 The lack of a destruction derby mode is a shame because crashing into caravans is fun but twatting yourself into another monster truck is exactly what I’m after. A few more weird trucks would have also been nice. Why can’t I play as the Dungeon of Doom Monster Truck from WCW? Millions in licensing rights? Pffffft, I thought this was monster trucks, didn’t realise you were so into the “rules”.

There’s a good chance I literally never think about Monster Truck Championship again, but for a lazy Saturday it was a fun few hours. It feels like the thing I would have grabbed from BlockBuster in the PS2 era and obsessed over for the few days of the rental.

There’s an ATV game from that era that I once rented and ever since I’ve hunted for it every few months without any trace. I remember it being incredibly fun, but it left zero trace. “So painfully fine it may cease from existence” probably won’t become a box quote but it’s precisely my thoughts on Monster Truck Championship. 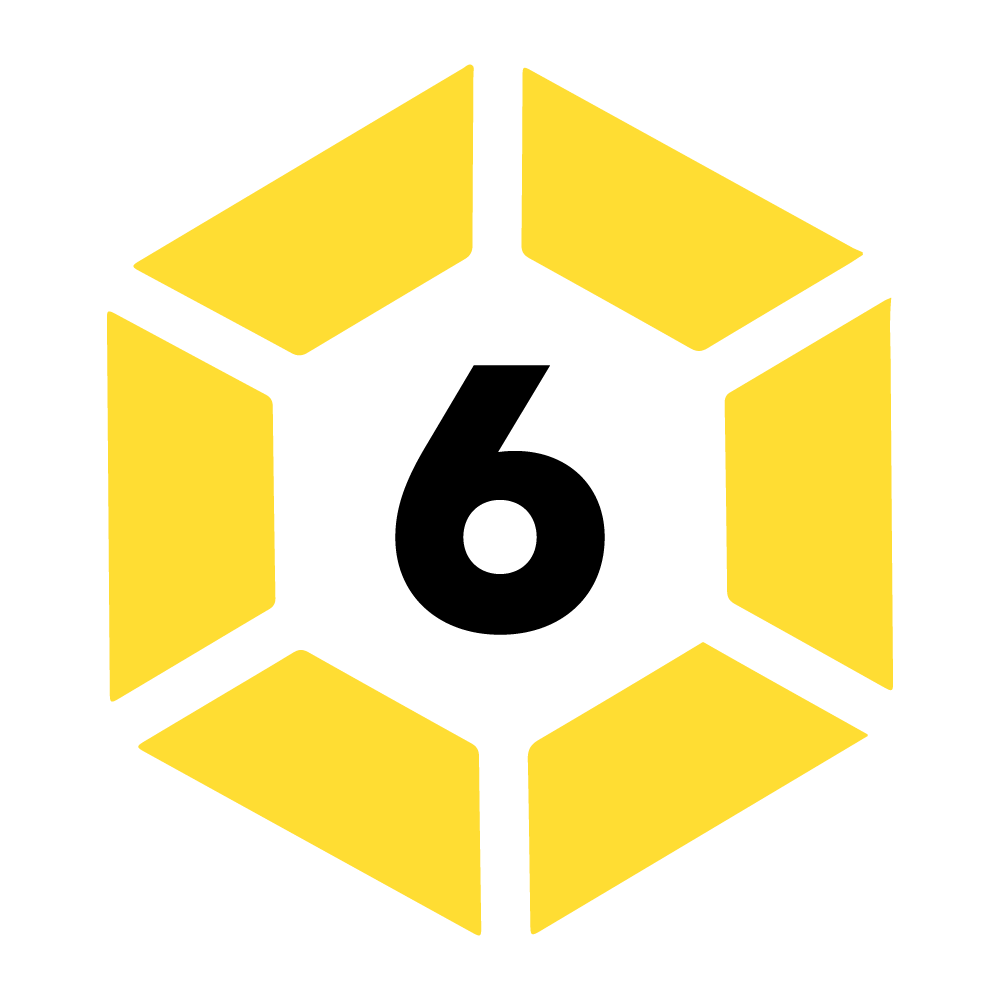