Samus it ever was 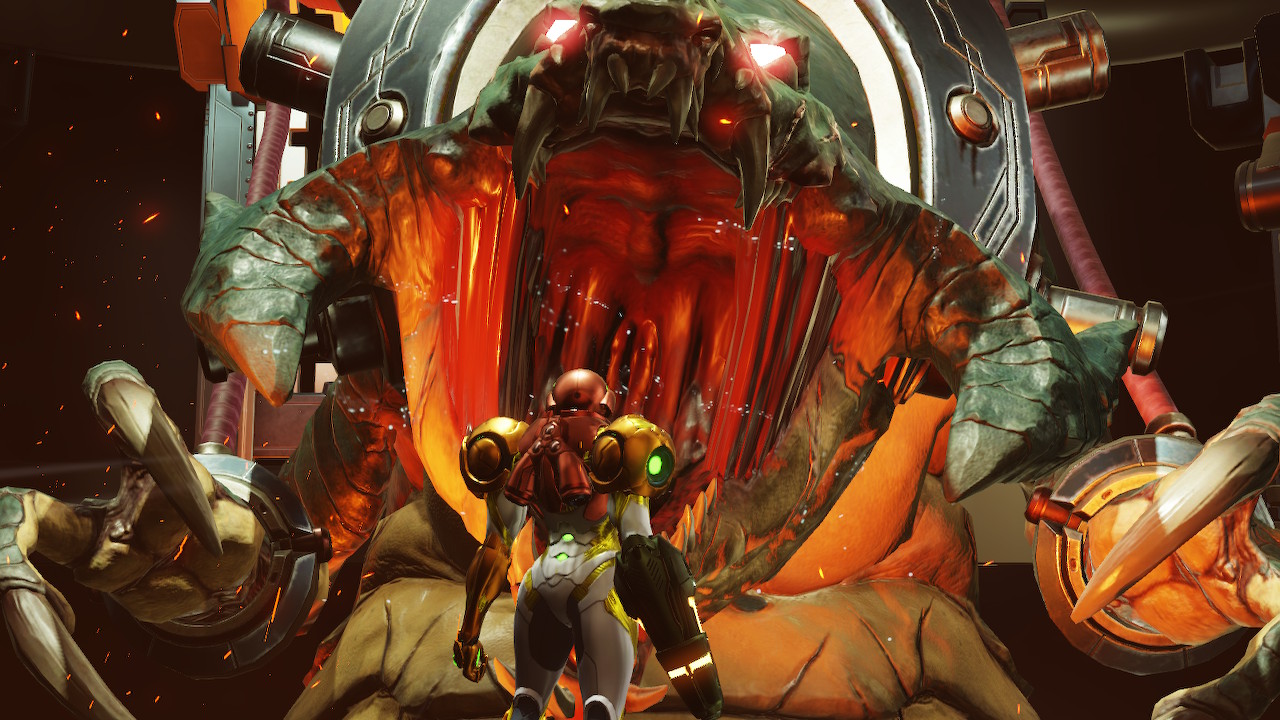 Metroid is the Dark Souls of video game franchises. Not because it’s incredibly difficult, which it is, not because it requires a mastery of a wide range of mechanics, which it does, and not because it’s consistently obtuse about what you’re actually meant to do and where you’re meant to go, which it most certainly is, but because the name itself has become shorthand for a whole genre. It’s become almost pavlovian for people to see any kind of 2D adventure game with even the lightest backtracking elements and scream “Metroidvania”.

Metroid Dread feels like developer Mercury Steam saying “We can do that, and better” and in creating a game that’s rewarding, engaging, and extremely fun to play, they succeed in this. Even if it feels like the game sometimes tries its best to stop you from seeing the best parts.

The game begins as Samus is dispatched to a planet to recover 7 E.M.M.I. (Extraplanetary Multiform Mobile Identifiers) after the Galactic Federation loses contact with them. But, when she arrives on the planet she is attacked by a mysterious figure, who after defeating her, strips her of her abilities, an occurrence that happens so frequently for Samus, she might as well leave her suit at home when she visits anywhere new.

She then discovers that the E.M.M.I have been hacked in some way, rendering them extremely dangerous, and impossible to damage. That’s until Samus is able to absorb a strange energy that, at least temporarily, allows her to return the multi-colour slimline Daleks to scrap metal. 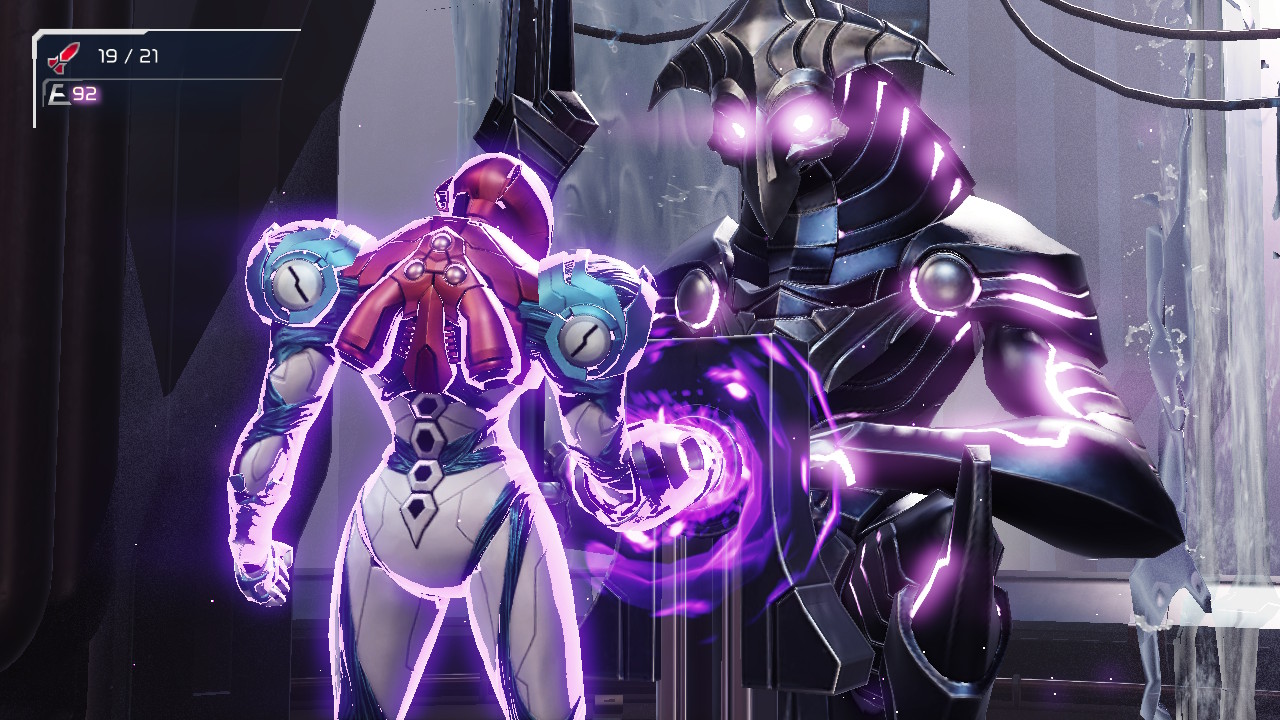 Metroid Dread is a 2D action game in which your movement is controlled by the left stick and your aiming is controlled by the right. You can anchor yourself in place by holding the L button in order to pull off more precise shots. This quickly becomes vital as enemies are quick and hit extremely hard. You can alternate your weapon by holding the R button, leaving the whole process of controlling Samus feeling occasionally cumbersome.

While playing in handheld mode, (my preferred method, especially on the Nintendo Switch OLED), I found that my hands would regularly cramp during the more intense action sequences. Boss fights that I found extremely tough in handheld were rendered significantly easier by using a Pro Controller. The controls feel perfect, and it’s still extremely easy to get confused by the heat of the moment and forget what each of your powers does. I’m torn whether or not a weapon wheel style system would help, as although it would be easier, generally speaking when you get an upgrade that fills the role of another weapon, it just replaces that old weapon, so don’t find yourself redundant missiles.

The game is broken up into several different biomes, each of which host a boss, and an E.M.M.I. Typically you need to adventure through the levels, avoiding the E.M.M.I. your first time through and make it to the boss. After you defeat the boss, you’ll unlock the ability to kill the E.M.M.I, but prior to this, if you’re caught by them, you’re almost certainly dead, unless you can complete a quick-time even with incredibly precise timing.

I’m conflicted on the E.M.M.I as although they’re incredibly intimidating, and add a lot to the atmosphere of the game, there’s a strange middle part of the game wherein you upgrade your mobility to such a degree that they’re barely an annoyance. Early in the game you’re desperately trying to avoid them, moving flowy, activating your cloak when you can, and feeling genuine fear. Then in the second half of the game you’re essentially a bouncy ball that can get out of an E.M.M.I zone without so much as looking sarcastically at them. 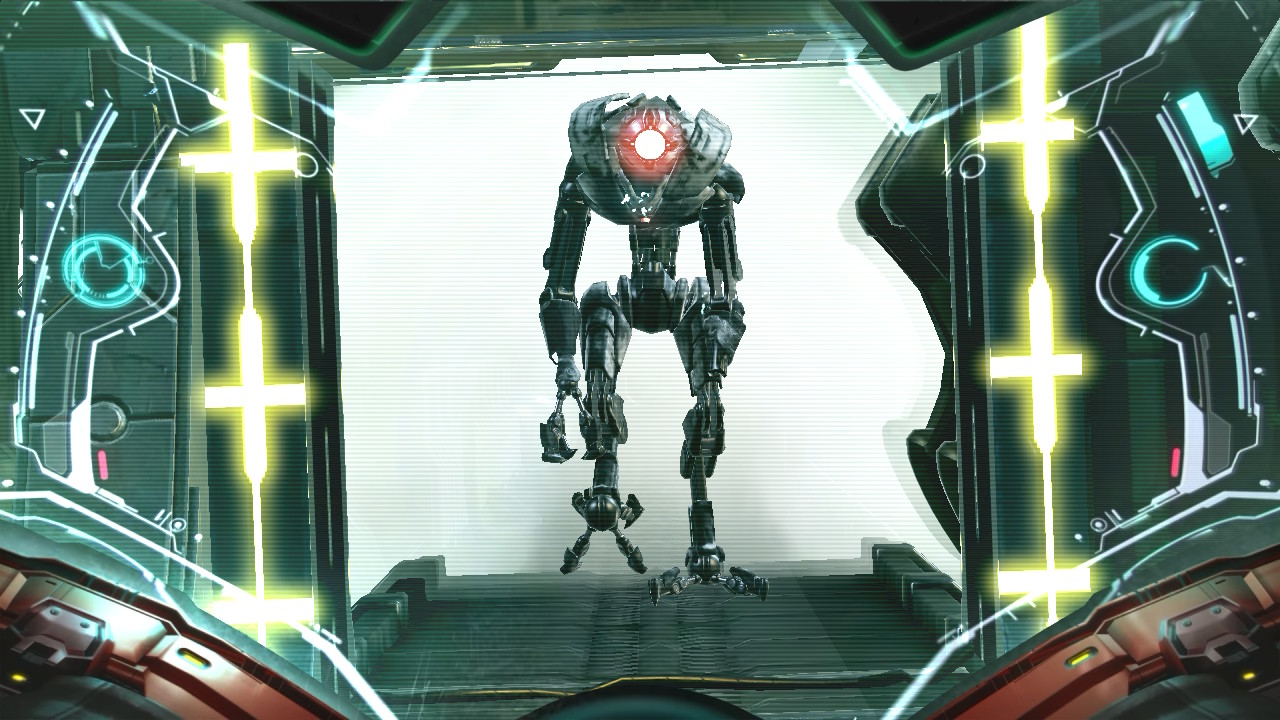 I think this transition between being terrified of them and not remotely caring could have been slightly more gradual, but honestly I’m also glad that they stopped being an issue, because in the early game when you’re just trying to get your bearings, and you’re already completely lost, an enemy that’s essentially a one-hit-kill can be very frustrating.

There’s a tool tip in Metroid Dread that at one point tells you, if you’ve hit a dead end, just start shooting at things. Now, it’s Metroid tradition for hidden blocks, shortcuts and other items to be hidden from view until you’ve sufficiently blown them to pieces, and for the most part the game communicates to you what you should be doing. But, there was one section in the middle of the game that I had to use a guide for as I simply could not fathom what I was supposed to do. It turns out there was a single block that I had missed, as it looked totally different from the blocks that are usually breakable. I felt stupid for having missed it, but I also felt like the game had just wasted my time.

I know there are going to be so many players that completely stop playing at that point, because why wouldn’t they? Yes, the game does tell you about shooting random blocks, but if you didn’t have the expectation of that coming in via playing other games in the genre, you’d be utterly confused. It just feels cheap. And it’s a real shame, because the biomes following this and the boss fights are spectacular, so it feels like an annoying barrier that’ll stop plenty of people from seeing the best parts of the game. 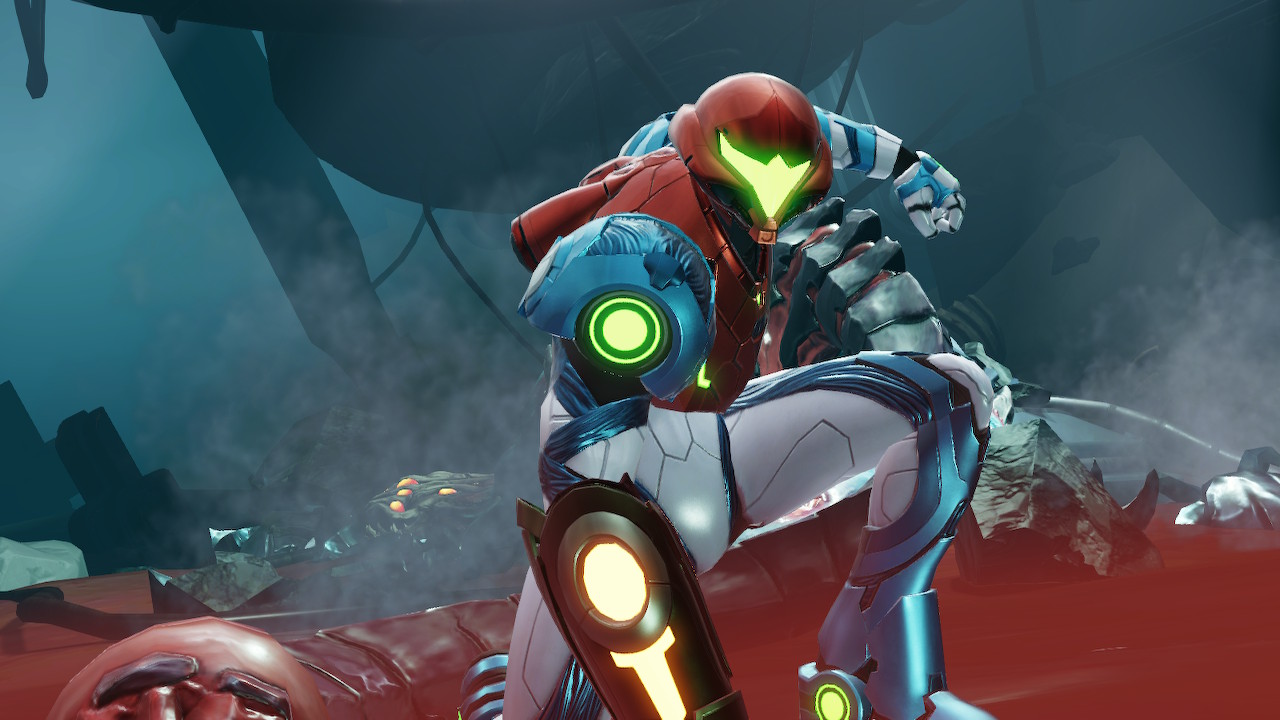 The game looks brilliant visually, and especially pops on the Nintendo Switch OLED model. Samus’ armour remains one of the coolest designs in gaming history and the way it evolves across the course of the game is always an exciting moment. The later biomes that start to introduce a fantasy element to the otherwise mechanical world are incredible, and there’s some great camerawork for a game that never leaves the 2D perspective outside of cutscenes. I found some enemies slightly difficult to read, and they’re not the most exciting designs in the world, but the large bosses look fantastic, and they’re hard as nails.

This is the first Metroid game I’ve ever finished, despite loving the genre dearly. And with Metroid Dread, it feels like I’ve picked a game that’s dedicated to demonstrating why these games have had such a lasting impact on the industry. The combat is hard, but fair and feels fantastic to play. It can be a bit overwhelming at times, and it’s best enjoyed with a controller, but it never feels cheap. The exploration is rewarding, but the mid-game does get pretty confusing, and the game is bad about giving any sort of direction. I was enjoying the game in the first half, but in the second half I could barely put it down. It’s a brilliant game, and a shining example of why games like this still have such a firm place in the industry today, and who we have to thank for that.