Hooked on a feeling 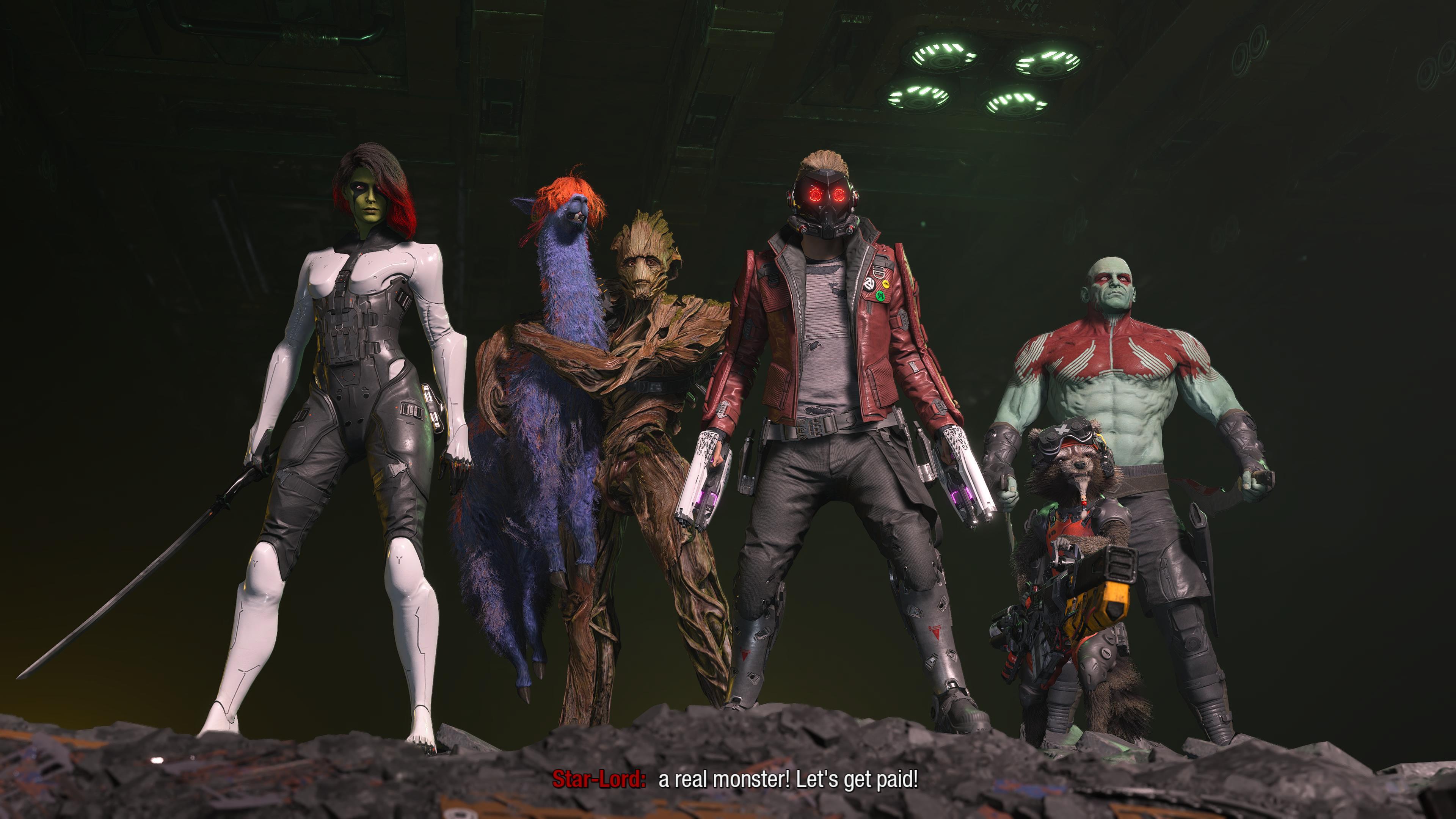 This review was published as part of Overlode’s 2021 Advent. As part of our 25 days of content, we’ll be taking a look back and reviewing some of the games we missed at the time of their release.

It’s probably worth mentioning at the start of this review that if I wasn’t for the Guardians of the Galaxy films, (and later, Tom Holland’s Spider-Man films) I would basically have no idea what was happening in the MCU. When the first Guardians of the Galaxy film came out, I mostly went to see it because I loved Chris Pratt, back when I knew him as the loveable Andy Dwyer on Parks and Recreation and not the pseudo-right wing lunatic who will be voicing me in the animated film of my own life.

I was blown away, not only by how visually unique it was from the, by that point, ridiculously uniform and ugly MCU palette but by how genuinely funny it was. This was in an era before The Force Awakens, so I was dying for a swashbuckling space-adventure with characters that had I been 10 years old, I’d have posters of on my walls. Then, when the second Guardians film came, out, which for the record is the undisputed best Marvel film, and it not only made me laugh more but also cry, I attached to the Guardians in the way I did to Han, Luke and Leia when I was first shown A New Hope when I was 8 or 9. 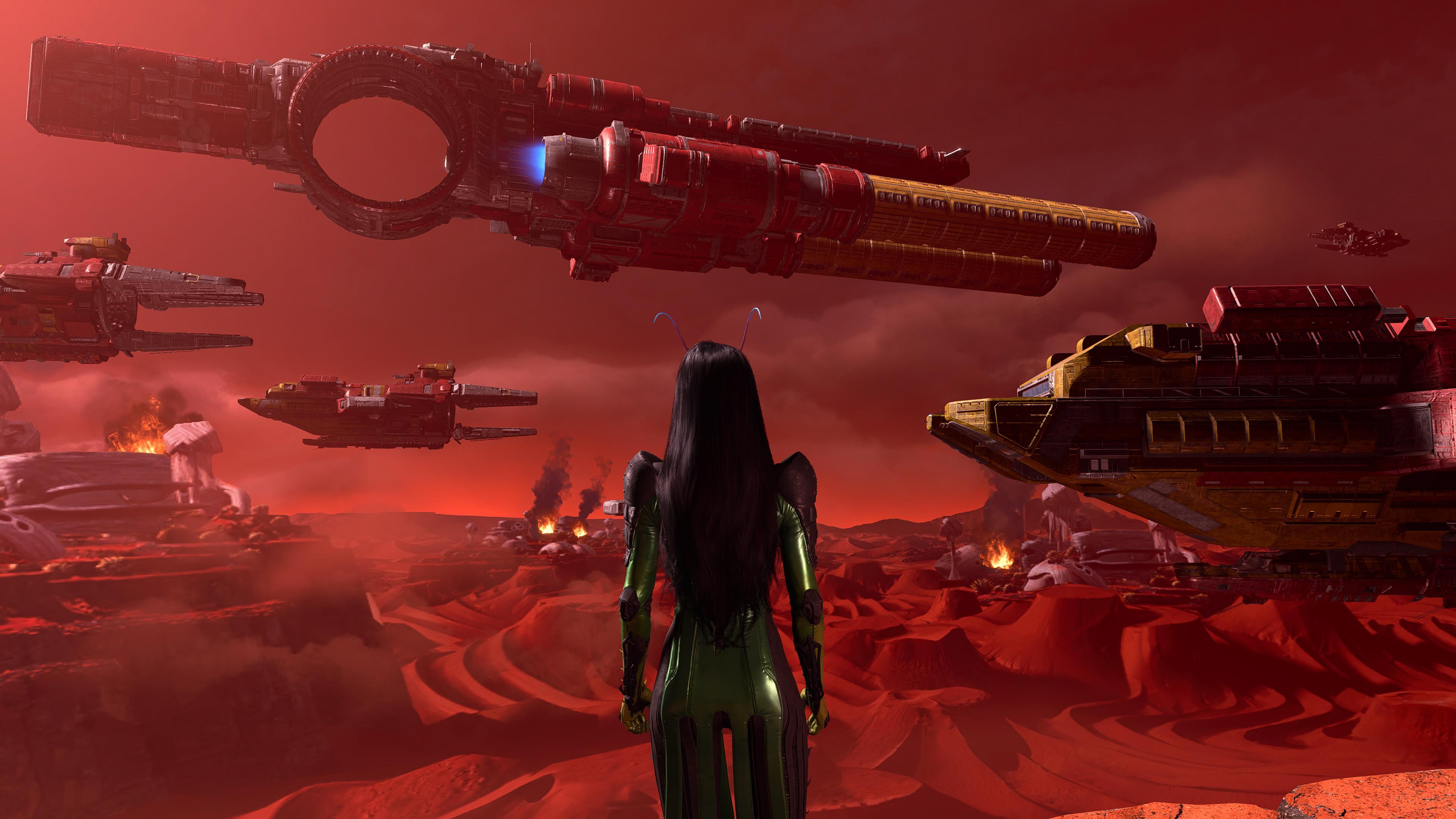 Flashforward to 2021 and we find ourselves in a bit of a superhero video game renaissance. Insomniac managed to basically perfect Spider-Man with their first try, and while Crystal Dynamic’s Marvel’s Avengers is flawed from a games-as-a-service perspective, I will stand by the Kamala Khan’s story in that game is rock solid.

Guardians of the Galaxy is the next comic book franchise to face the music and despite some issues with repetitive exploration sections and the fact that it’s about 3 hours too long, it comfortably sits second only to the web-headed dynasty at the top of Marvel’s video game tree.

We join the Guardians after they’ve been together for only a dozen or so missions. Star-Lord, Gamora, Drax the Destroyer, Rocket and Groot are still new to the heroes-for-hire business, and internal conflict, especially between Rocket and Star-Lord over who really is the captain of their ship, The Milano, is rife. In typical Guardians fashion, the team finds themselves in deep debt to Nova Corps, a galactic police body, the head of which, Ko-Rel is a former lover of Peter Quill. 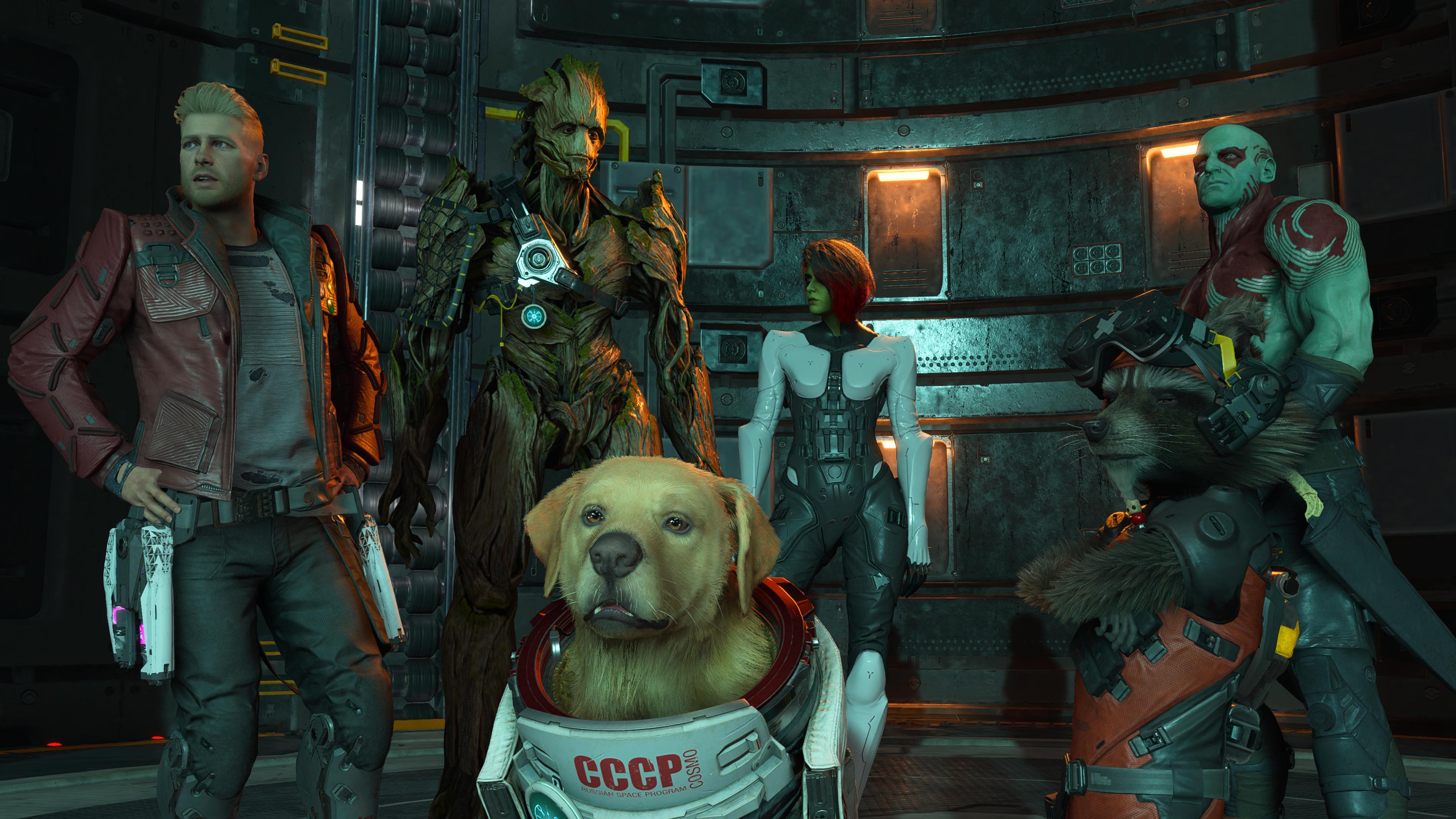 When aboard the Nova Corps ship, Peter meets Nikki, the daughter of Ko-Rel, this causes Peter to panic and do the math on whether or not he’s suddenly got someone to hand down his red leather jacket and the keys to the Milano too. He isn’t given too much time to ponder, as then the Guardians, in an attempt to clear the debt, find themselves visiting various planets that are being taken over by religious cult, fueled by The Promise, a state of possession during which the victims see what they desire, in a constantly looping fantasy.

Guardians of the Galaxy is a third-person action game during which the player takes control of Peter Quill/Star-Lord, and orders the other members of the team using the shoulder buttons. In practice, this means using Groot’s ability to trap enemies in vines, while ordering Rocket to launch a grenade at the trapped foes. At the same time, Gamora and Drax tear enemies apart with wide-ranging melee attacks.

As Star-Lord, you could almost get away with just floating around above the team, ordering them like an RTS general, but using Star-Lord’s pistols, especially when they upgrade later in the game, is very fun. The abilities all work together seamlessly, and there’s real satisfaction in taking down a large enemy using all 5 of the Guardians together. 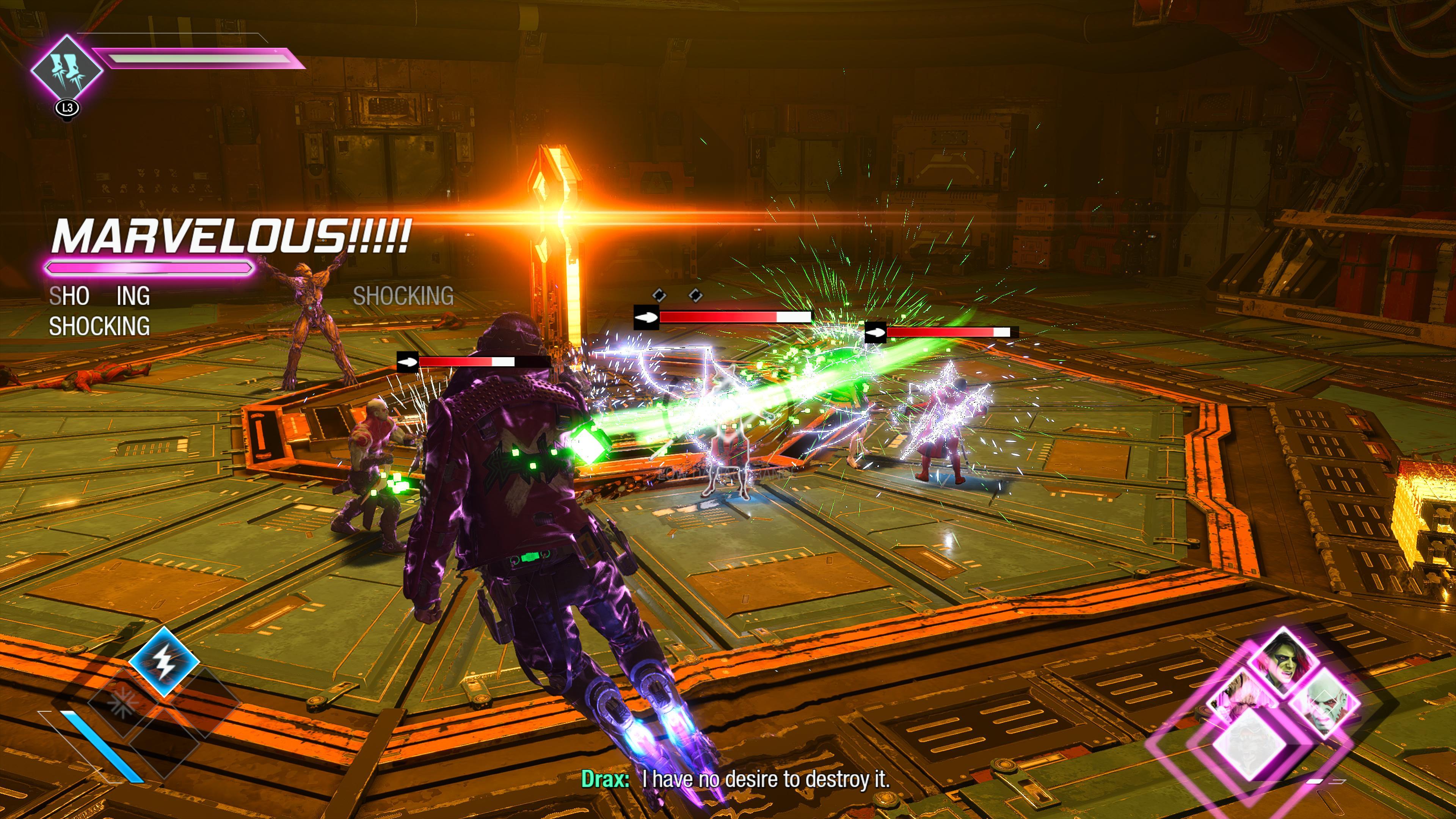 As you battle, you’ll fill up your huddle meter. Doing this will allow you to call in the Guardians for a pep talk. You need to listen to what they say and respond correctly, or the damage bonus you get will be less. Initially, I kept messing these up. I would listen to them, but I couldn’t really tell what the game wanted from me in terms of a response. As I progressed the game, I hit every single one of them correctly, which actually felt great from a story-telling perspective. It was like as the adventure continued and my Peter Quill was becoming a better leader, I always knew what to say.

What makes it better is that these sequences conclude with a random song from the game’s incredible licensed soundtrack. It wouldn’t be Guardians of the Galaxy without music that sounded like it cost about $1B to assemble. Motley Crue, Joan Jett, Iron Maiden, it’s a genuinely stacked list and those moments where you’re in an amazingly tense fight, and you pop the huddle meter only to hear the first few notes of Wham’s ‘Wake Me Up Before You Go-Go’ are laugh out loud funny.

The whole game is funny, the humour that’s essential for you to put up with this group of arseholes is pitch-perfect. I was also really impressed by how little I found myself missing the movie cast. Since really only 3 out of the 5 have human actor comparisons, I found it way easier to divorce them from the MCU cast, unlike Marvel’s Avengers, which was a tougher ask. Gamora is a real standout here, with this interpretation probably surpassing the film version for me. 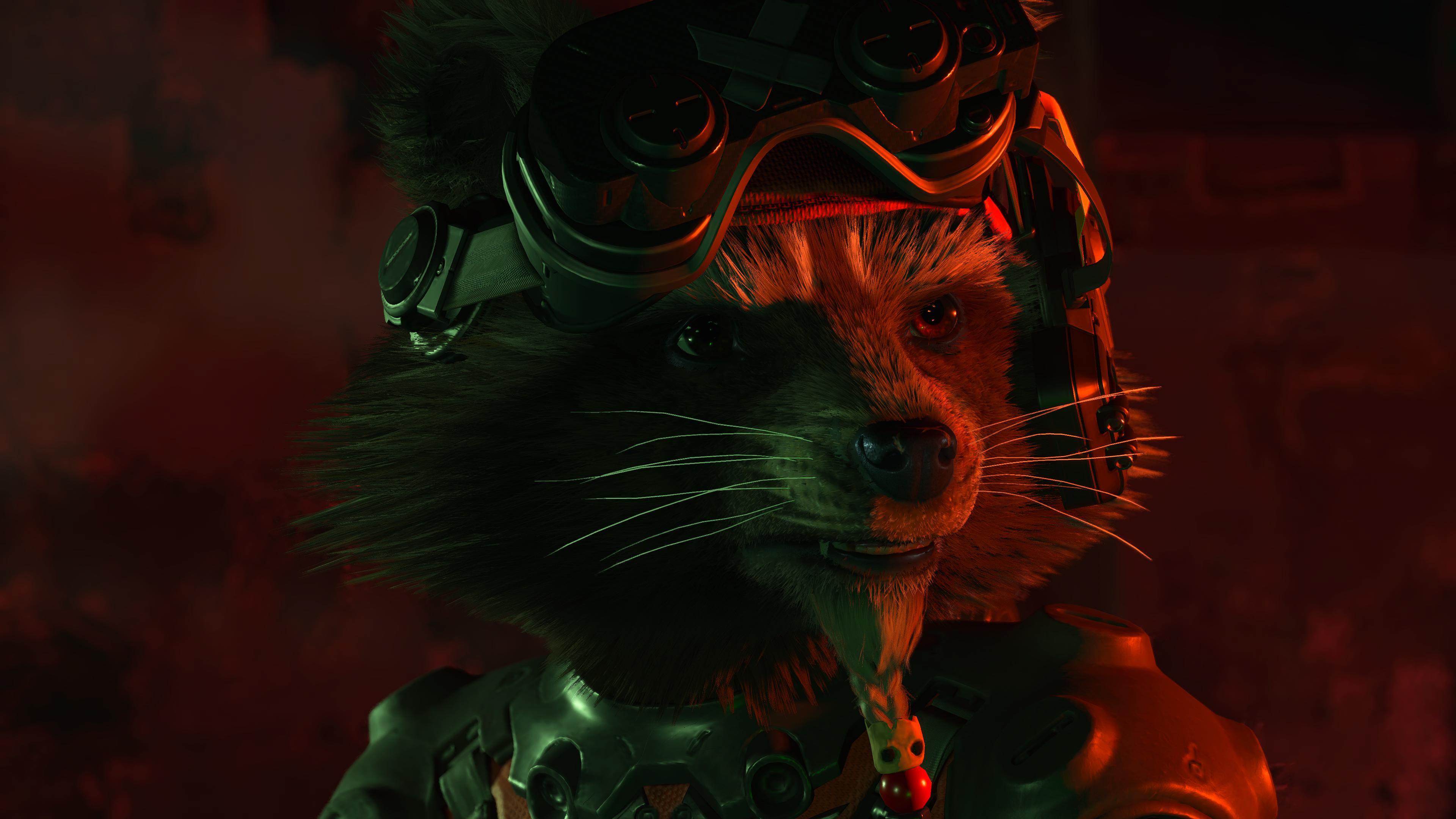 Between fights, there are long stretches during which you’re essentially just passing the time while conversations are happening. The things you are doing, like clearing a path or asking Groot to create a bridge can get a bit boring, were it not for the character development that happens in those moments. I really only found myself getting a bit bored of it as the climactic battle was happening and I had to go to another planet, although to be fair, the fight at the end of that chapter is a fantastic payoff.

The game also looks gorgeous. It’s a planet-hopping adventure, so you’d expect the developers to stretch their legs with the art style, and they do it tremendously. A highlight is the cyber-punk drenched spaceport of Nowhere, which happens to be in the severed head of an ancient celestial being. Facial animation is also excellent, and the fur tech on Rocket’s face is only outmatched by Ratchet & Clank: Rift Apart, leaving it in esteemed company.

Guardians of the Galaxy is a fantastic game that surprised me not only with how much I enjoyed the combat, but how it reminded me just how much I love these characters. It’s funny, genuinely full of heart, and a visual powerhouse. It might just about outstay its welcome if you’re not as into these characters as I am, and you might find the combat a bit repetitive, but as soon as it was done, I didn’t think “That took ages”, all I thought was… “so… when’s volume 2?”