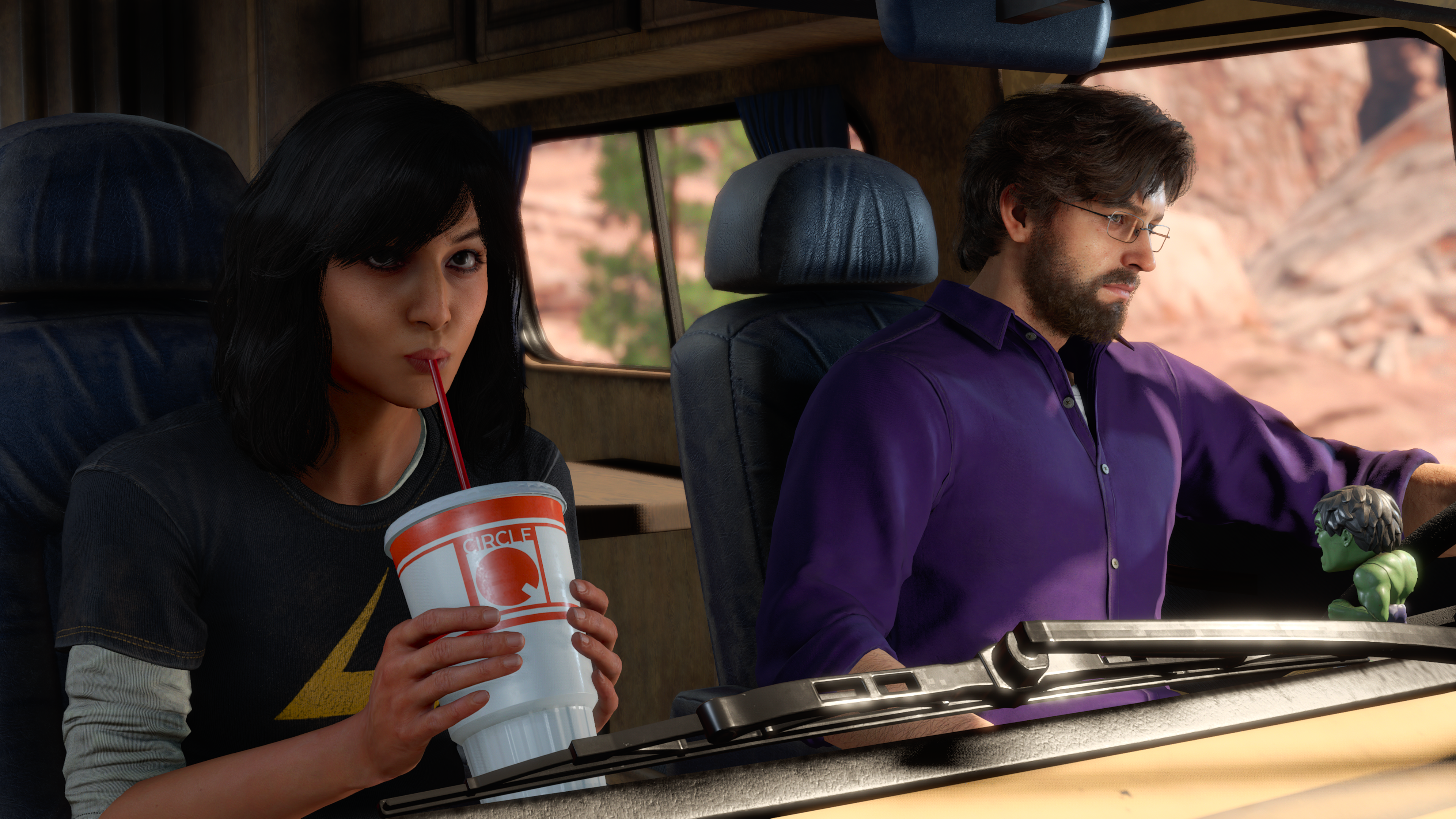 I didn’t even start Marvel’s Avengers when it first released. From an awkward E3 unveiling to mass negative sentiment surrounding the beta, I couldn’t have been less interested in a loot based live game starring Earth’s mightiest heroes. Since then, my only insight into the game has been the few evangelists left talking up its good points and lamenting its lack of post-release support. Check out this video from Greg Miller of Kinda Funny for a glimpse into the mindset of the hardest of the hardcore fans.

With the release of the Xbox Series X and PS5 versions of the game, I thought it was about time I gave it a try. After all, I’d had a copy since Microsoft sent them out with the review units of the consoles, although until a few days ago, it was just an Xbox One game.

To say I was surprised by my time with Marvel’s Avengers would be a criminal understatement. Instead of some empty, vacuous and repetitive Anthem-like, I found an incredible superhero story and a character that I loved so much that I’ve been searching out her best adventures all day, stocking my Amazon basket full of graphic novels. 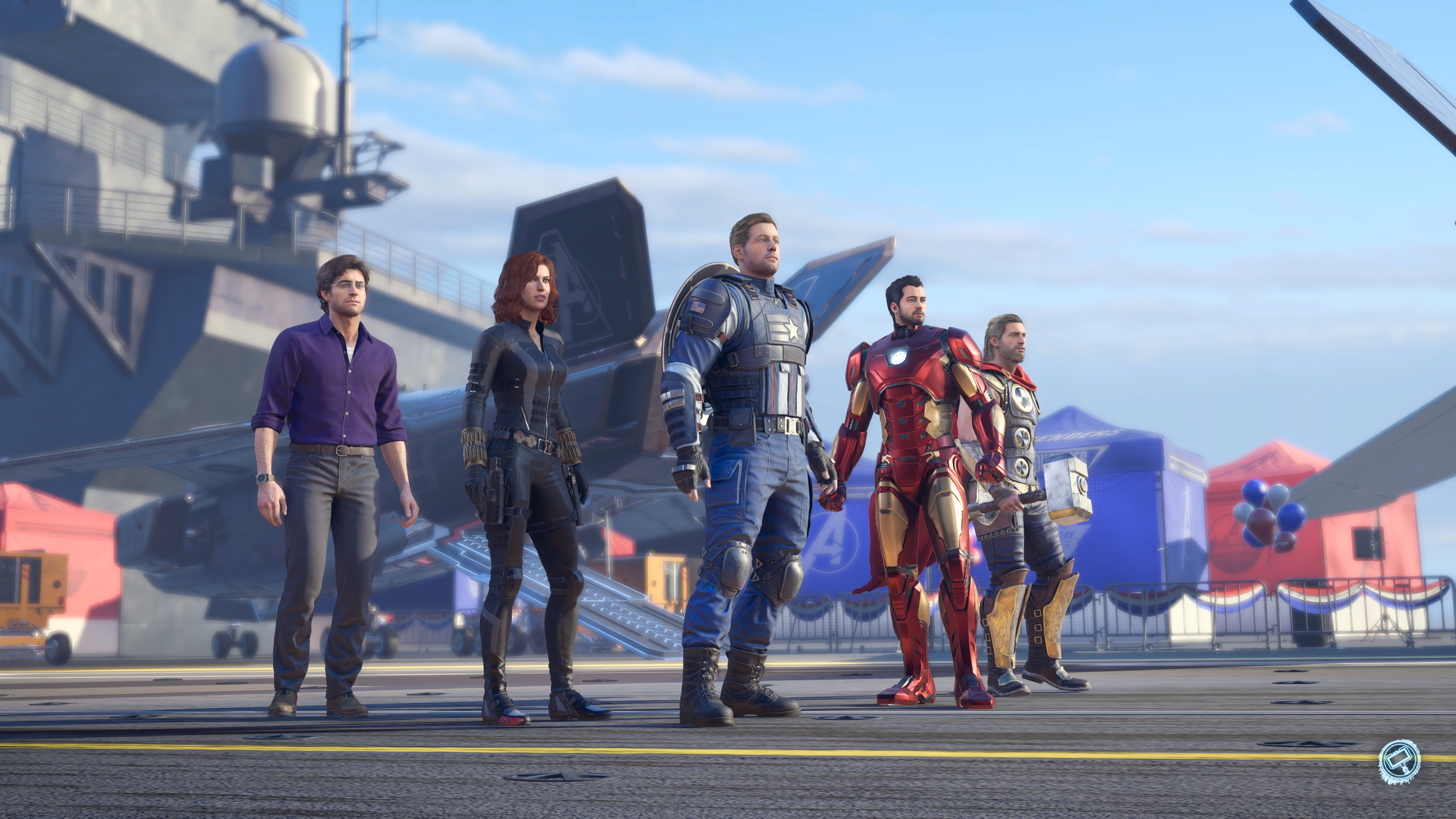 I’m talking of course, about Kamala Khan. It takes some extraordinary writing to upstage the entire team of The Avengers in a game that bears their name, but Kamala manages to do this before you’ve even had a chance to don Iron Man’s suit or harness the power of thunder.

The narrative follows Kamala following A-Day, a disaster that claimed the lives of thousands and gave more supernatural powers. With the blame being placed squarely on The Avengers, the team disbands and the age of superheroes is over. Those that are left with powers are treated as a plague in need of a cure.

Kamala, a Pakistani-American from New Jersey and Avengers superfan is one of those InHumans. She boils her powers down to “Stretchy Arms” but as the narrative develops, it’s clear her real power is ascending the list of my favourite superheroes ever. There’s no limit to the incredible things you can say about Kamala and her performance by Sandra Saad. She’s the undisputed star of the game, and the lowest points narratively are when she’s not on screen.

Throughout the campaign you’ll play as each of the Avengers: Iron Man, The Incredible Hulk, Black Widow, Thor and Captain America. Their missions give you a good chance to try out their different powers, which while not incredibly diverse, did have enough variety that I was able to pick a favourite pretty quickly. Thor stans, make yourself known. 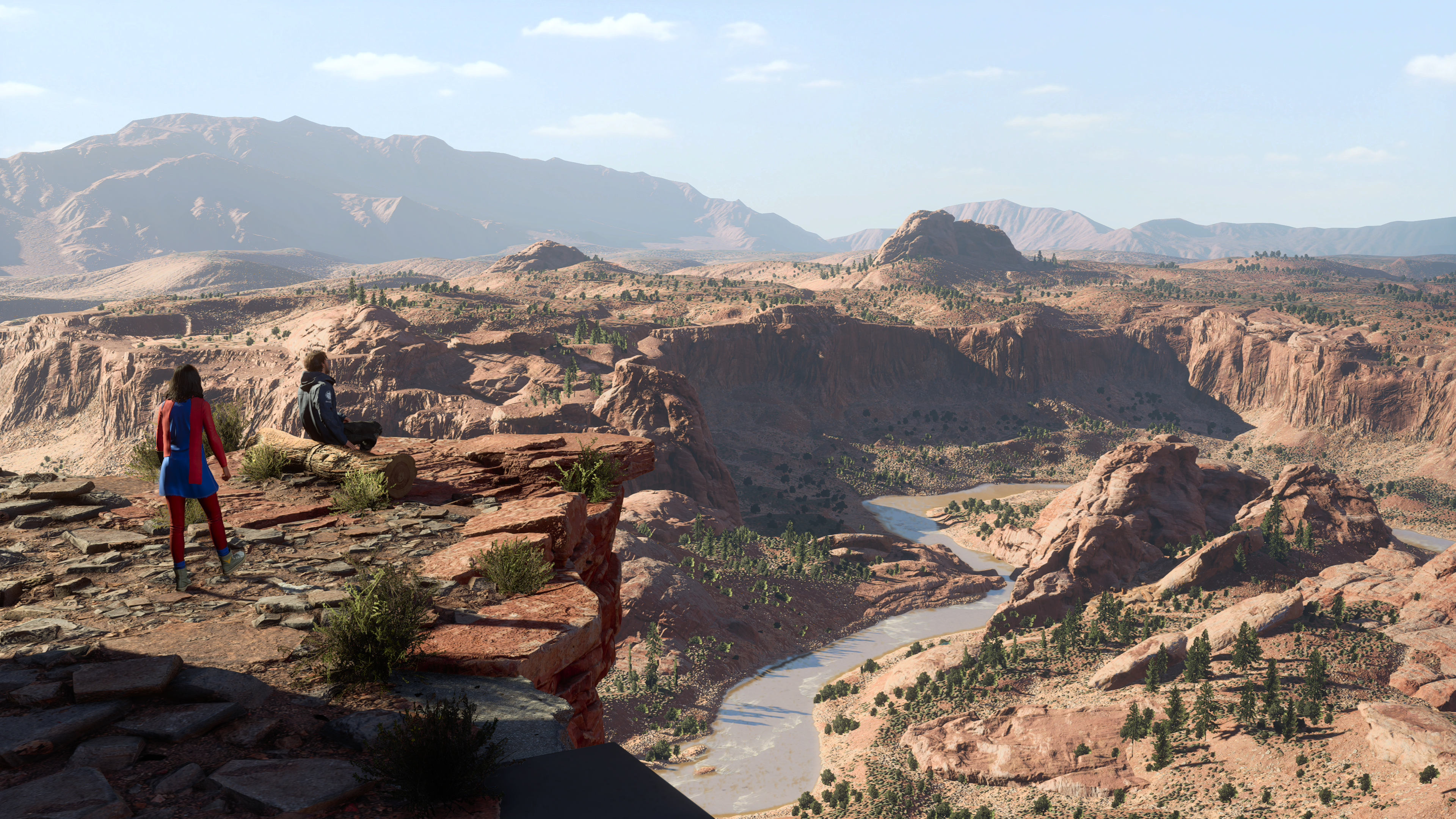 The game is a loot-driven beat-em-up, meaning you’re constantly finding new pieces of gear to equip to make your hero stronger. This doesn’t change their appearance at all, that’s saved for the full costume changes that can be earned or purchased in the store, but the loop of picking up and levelling up new items tickles the part of my brain that loves games like Diablo 3. There’s also only really six or so slots to keep track of, and there’s an ‘equip best gear’ button if you don’t have the patience to compare stats to decide which socks would best suit Cap’.

You end up fighting A LOT of robots. Big robots, small robots, purple robots, robots who can fly, the point is; the enemy variety is very lacking. This becomes really apparent in the post-game where you’re essentially fighting the exact same things over and over again until you reach a boss fight, which, hilariously, is more often than not a big robot.

The main campaign is all too brief. You’ve barely finished the assembling before it’s time to roll credits, although the final confrontation with the full team in action is great. The game really nails the banter without going overboard. Nolan North’s Tony Stark manages to stay true to the character without becoming invisible in Robert Downey Jr’s immense shadow.

That’s another thing, at no point did I think ‘aw well it’s not the movie cast’. The game does a startlingly good job of differentiating the takes on the characters in the same way that Marvel’s Spider-Man did. Although to be honest, as comic fans know, Iron Man has looked like a slightly different variation of a man in a goatee for decades; the prospect of seeing a new version of him isn’t startling. 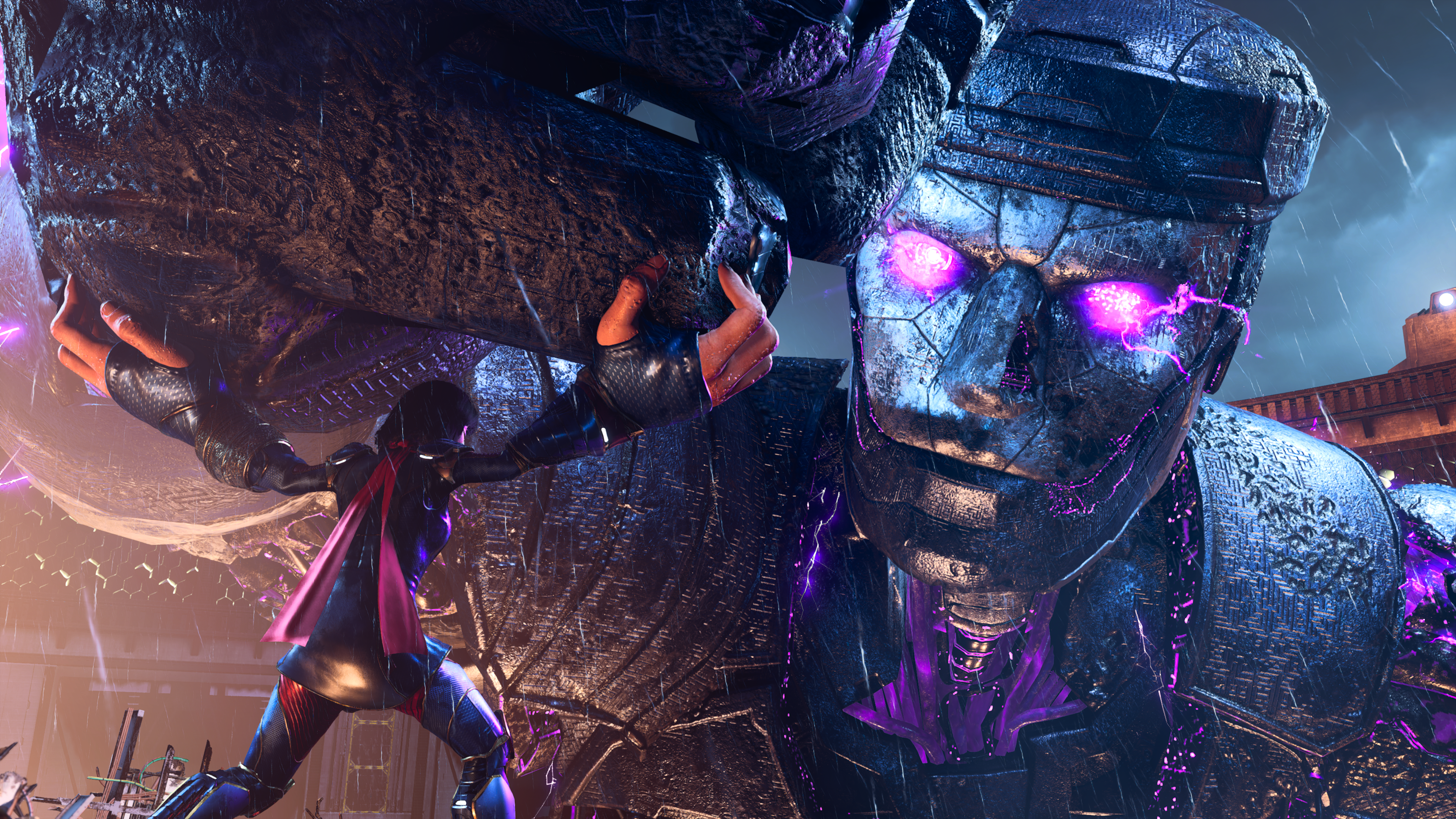 The game looks great, especially at 60FPS on Xbox Series X. The performances are well captured and the faces of the Avengers look great. A few of the locations you visit are a bit repetitive, but if you’re only sticking to the campaign, you won’t visit them enough to notice. This isn’t the case in the post-game, however.

Once the campaign is concluded, your map is filled up with mission and icons and this is where the grind begins. There’s daily and weekly challenges, a battle pass style progression system for all of the heroes, and a few more story based Operations, like the recently added Hawkeye and Kate Bishop expansions. These can be played with up to 3 other players, however the game will fill those spots with AI if you’d rather do anything else than talk to people.

These missions are very slight. They are designed for you to be in a party with your pals, talking over the interstitial dialogue and running as quickly as you can to destroy the objective. The experience started to drag for me as a single player, however if you’ve got a backlog of podcasts to listen to, these missions are ideal. 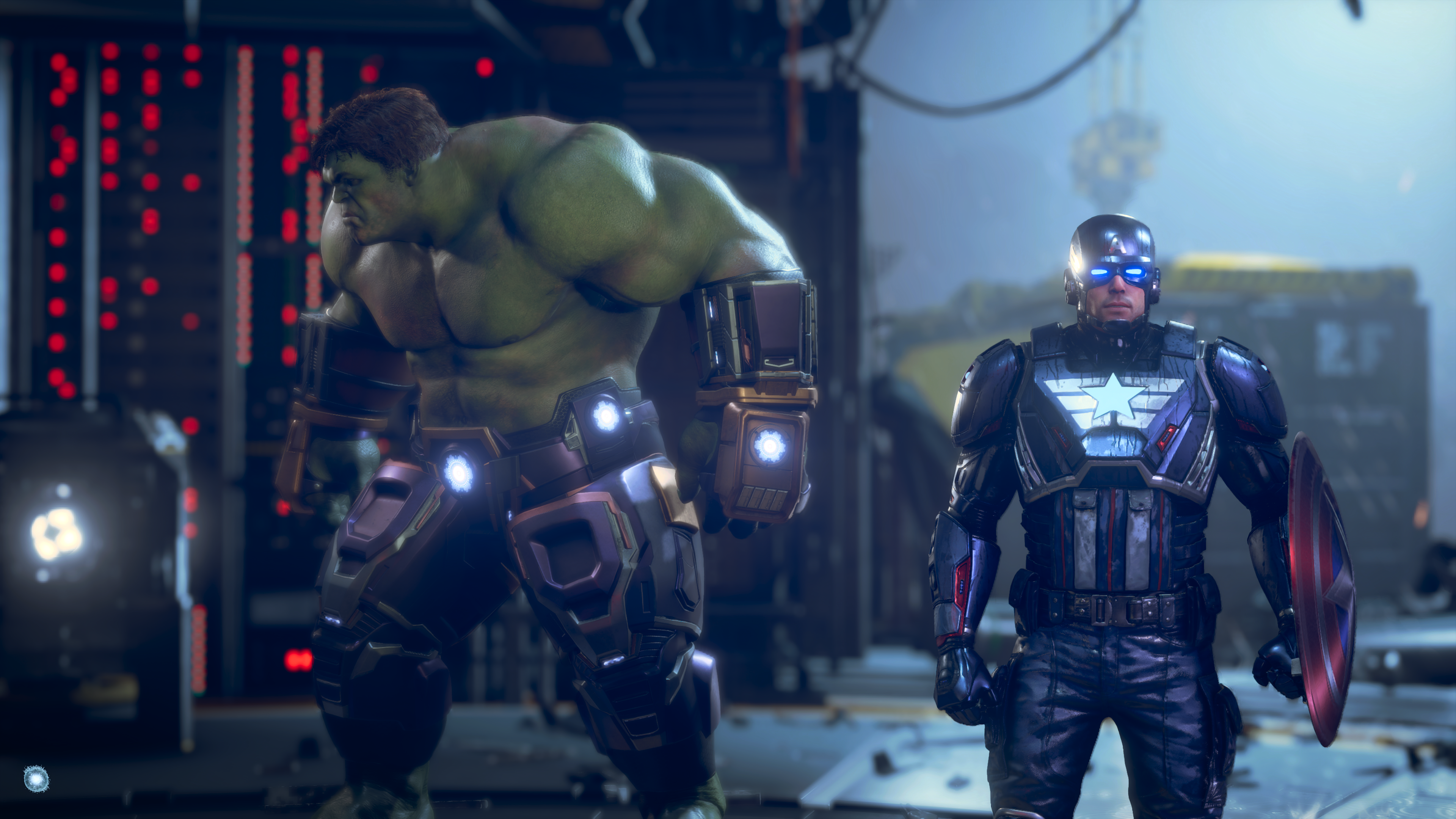 There’s a type of person that will play through the game’s nine-ish hour campaign and then put it down, having had a wonderful time getting to know a character who I predict will dominate the landscape of Marvel media in the next decade, in the same way that Miles Morales has come to be some people’s default Spider-Man. The writing is superb throughout, both heartfelt and funny and never once leans on it’s megalithic film property for support.

There’s the other type, me for example, who will now spend tens of hours grinding out Thor’s challenges and missions until I have every skill point, every costume and every emote. I’ve been looking for a loot game to grab me like this since The Division 2, and Marvel’s Avengers manages to do it without the mountain of administrative work.

A comic book game is great if it makes you search ‘Best Miss Marvel graphic novels’ before you’ve even finished. I’ve felt that way three times, Batman: Arkham Asylum, Marvel’s Spider-Man: Miles Morales and the minute the first scene between Kamala and her dad finished. Sure, the gameplay isn’t anything special, it’s a game where the numbers fly off of people when you hit them, you know what to expect.

But focussing in on an extremely human, contemporary story enhanced by a tremendous performance, Marvel’s Avengers isn’t the dead loot game I’d been so incorrectly led to believe it was. It’s one of the best superhero stories in video game history.