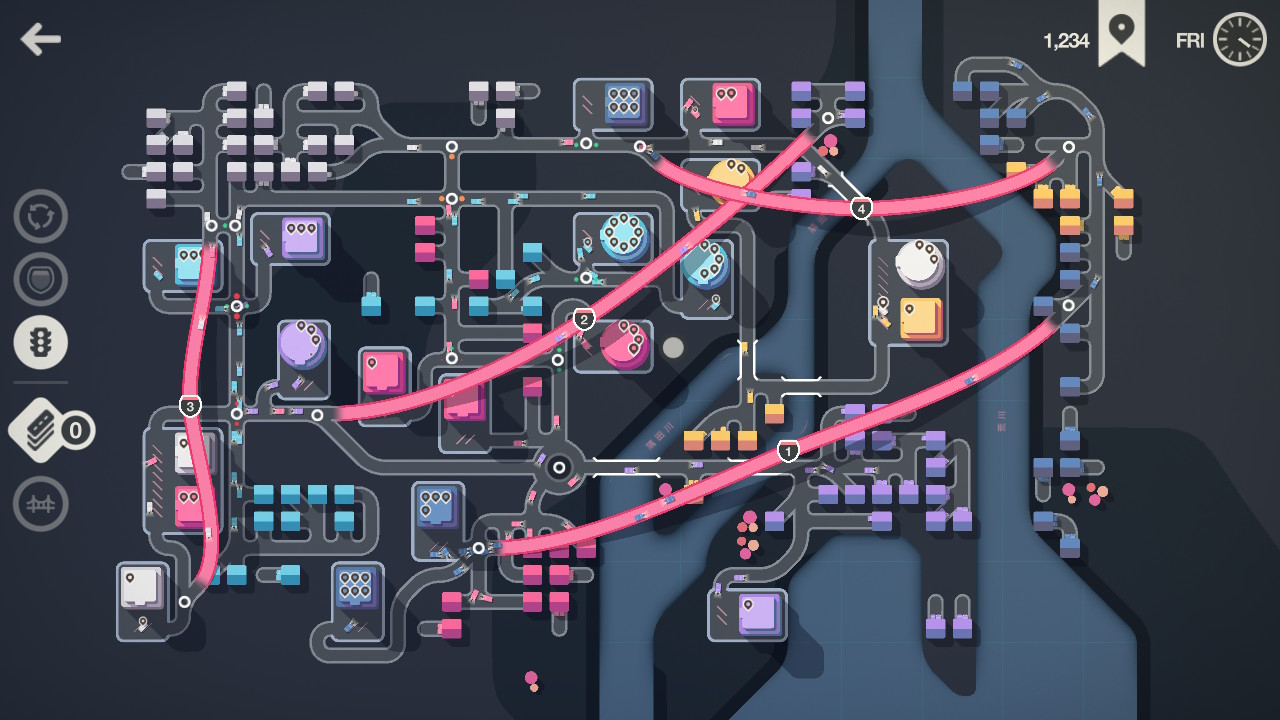 As the old adage goes – Rome wasn’t built in a day. This much is true, and by that logic, many more cities were also not constructed within 24 hours. Los Angeles, Beijing, Dubai, Warsaw, not built in a day, but crafted slowly over weeks and months by skilled architects navigating limited resources, pre-existing infrastructure, and the 24/7 needs of many. Rome couldn’t just bulldoze through the Colosseum to make way for an Amazon warehouse, and this is the challenge that Dinosaur Polo Club’s Mini Motorways presents to you.

Mini Motorways is a humble game with a simple goal: build a city, get points. Done that? Cool, rebuild the city, get more points. But you’re not the designer of this city, choosing where and how to place each building. Locations and houses will pop into a map at random, and it’s your job to connect them using roads, motorways, tunnels and bridges. The areas are colour coordinated – connect the red houses to the red buildings, yellow, green, and so on. The game ends if one of the buildings in your city can’t receive commuters fast enough, due to slow traffic or some other inefficiency in your roads. 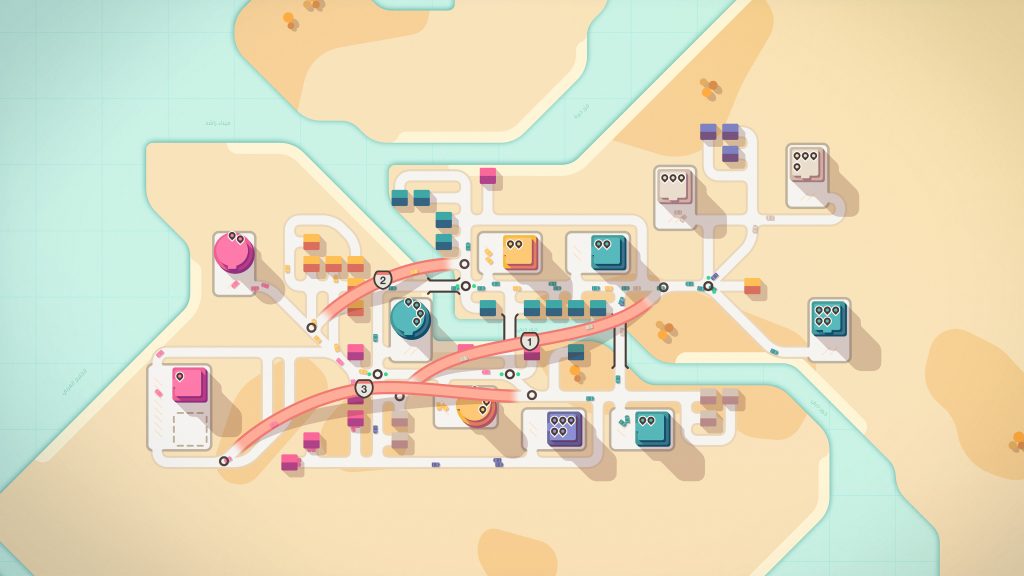 I picked up Mini Motorways at the end of a long weekend, craving a simple, repetitive brain off game with a light challenge, which the game provides. Every level can be unlocked quickly by earning a modest amount of points, but the real brainworm arrived with the arcade element of trying to knock my pals off the leader boards. With the competitiveness came a deep understanding of how each city functioned, and what makes it truly tick. This isn’t Sim City and you’re not creating your own fictional metropolis, you’re meticulously funnelling the inhabitants of a space that cares not for what you want.

Providing a method for traffic to get from one place to another is one thing, but controlling it is another. To curb chaos in your bustling city, you must streamline cars with traffic lights, roundabouts and titular motorways that let commuters zoot to destinations with ease. At the end of each in-game week, you’ll get a new resource, be it roads or any of the aforementioned tools. It sounds simple at first, and surely the most logical route to mega points is to create tiny isolated pockets of colours for maximum efficiency, or at least that’s what I thought.

Grouping commuters by colour got me thinking about my own moral standing. As more colours and destinations with bigger demands pop up and your travel resources dwindle, the real game is how to use what the game gives you to manage the flow, as buildings cannot be moved at all. Not only that, but as I started to create convoluted 30 tile roads to let one blue guy get from his blue house to his blue office like I’m Eiffel 65, I wondered if this was not only inefficient, but actually just awful. 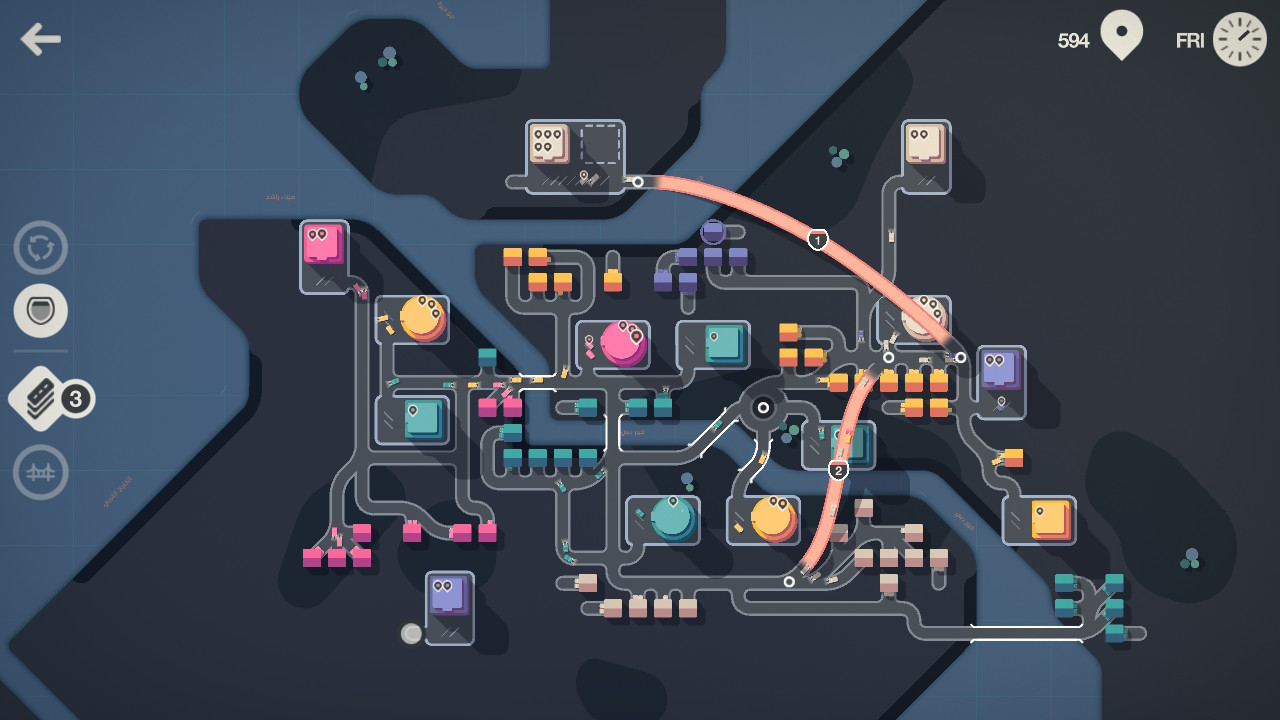 On a lighter note, the hours and hours of thought I put into navigating around rivers and mountains, placing roads speculatively in the event of a random house spawn, working out exactly how to thin out a rainbow cluster of cars as to not recreate the M1 at rush hour. The care leaked out into my actual life – suddenly I’m walking or driving around cities questioning the placement of a particular set of lights of roundabout, or wondering what’d happen to the traffic if it was or wasn’t there. I look at a giant, daunting office structure and wonder if it’d benefit from an additional road network – can yellow houses in the east get here okay? What about the pink across the street? This polite little puzzler has, without fanfare, injected colour into my own drab settings – thanks to its bubbly, charming and inoffensive art style that makes it a joy to stare (intensely squint) at.

Mini Motorways is by no means a hard or frustrating game, but it demands your attention. The inclusion of a pause button means you can stop and think about what’s causing the problem of a 57 car pile up, and you can delete anything you place, but cars must get back to their houses before the road or resource is returned to your inventory. That can result in carnage if you’re racing to restructure after a jam, but there has to be some challenge, right?

And it remains a game that’ll still pick up when there’s 30 minutes to kill or I want something low energy and distracting to sink my simulator teeth into. Often overwhelmed by the sheer scale of city builders like Cities: Skylines, Mini Motorways gives me a setting to be creative and functional simultaneously, while not dealing with the stress of where to put anything. It’s a surprisingly deep and intoxicating title and one that’ll keep picking up while I’m frequenting  grim cities and getting usurped by my Switch mates. When in Rome, an’ all that.