Here I crow again on my own 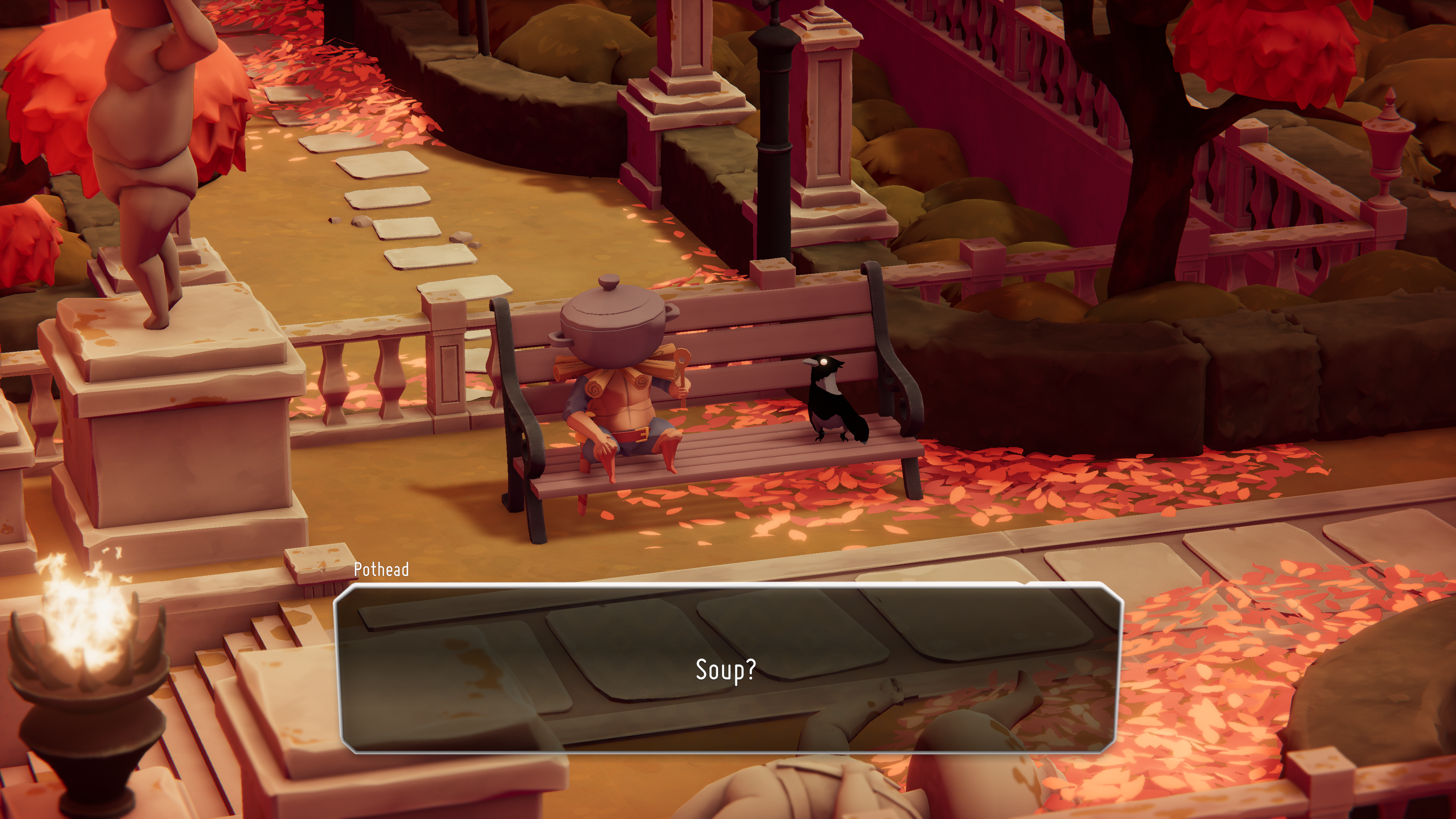 There is so much to love about Death’s Door. From its foreboding opening on a monochrome abyss, to the instantly absurd when you realise you’re playing as a wee crow. Death’s Door rides that line of the macabre and the hilarious throughout. Wearing the influence of Dark Souls and early Zelda titles on its sleeve, there’s occasionally an imbalance between the simplistic, yet enjoyable puzzle solving and the severe spikes in difficulty which dampened what was otherwise a wonderful experience.

Death’s Door is an isometric adventure game in which you’re tasked with retrieving the souls of the habitants of a decaying and mysterious world. You begin in a cemetery with little in the way of movement abilities, armed only with a sword, and a bow & arrow, like real life crows have. Combat is the game is hack and slash based, with no lock on and little health, in the early game even the easiest of enemies will send you back to the Hall of Doors often.

Like Dark Souls, the world you explore isn’t exclusively filled with things trying to kill you. There are a few NPC’s you’ll meet along your way, each of them giving texture to the area they inhabit. This includes Pot Head, a man with a pot for a head. Seemingly a direct reference to Siegward of Catarina, or Onion Knight as his friends call him. There’s also a gravedigger, desperate for death, yet cursed with immortality. He even seems mildly annoyed that you, a crow with a sword, can’t do him the dignity of chopping off his head.

All these bits of colour from the NPC’s really elevate the game’s writing and general tone. Sure, it’s a bit dark being a grim-reaping crow, but if you can’t have a laugh at your work then where can you? The story develops nicely, and while I did see the direction for the ending’s reveal very early, it’s played off well. 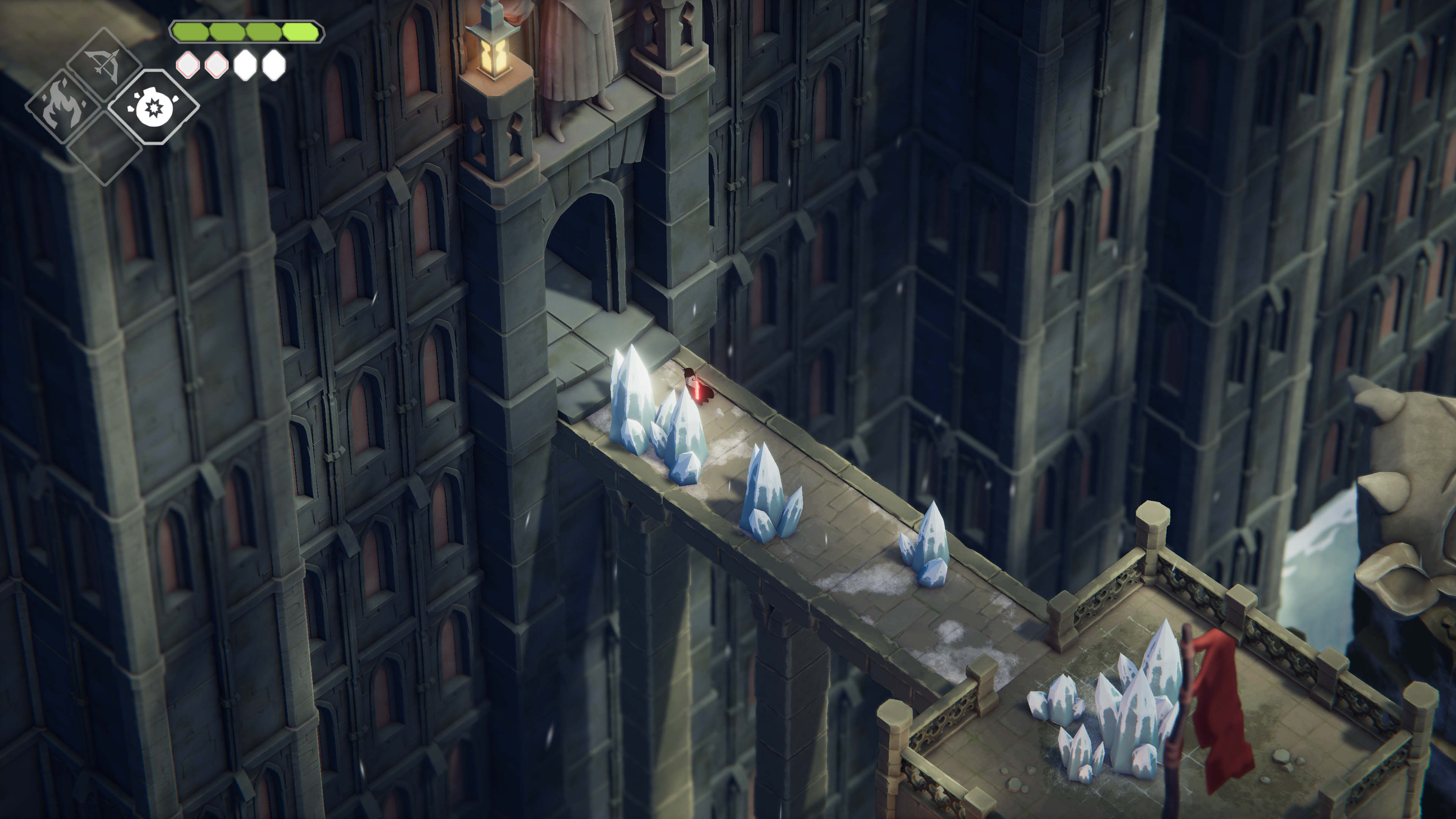 While the combat was mostly fine when it came to the standard enemies that would populate the dungeons, I felt that when it came to fighting bosses I was getting lucky rather than honing my skills. While projectiles can be parried by hitting them back, there’s no block to speak of, so prepare to wear your thumb out rolling around. Ranged attacks come in the form of a bow & arrow and some magic you’ll learn as you progress. This magic is also used to gate you from areas allowing for some light MetroidVania secret discovering. The ranged attacks have four charges which can be recovered by using your melee attack.

It really pains me to say this because I love so much of the game aesthetically, the visuals and music are incredible, but I really feel like the boss fights, and a few of the areas leading up to said fights are a bit too hard. There are ways to upgrade your health, but in my entire playthrough I only found two out of the four four shards I needed to do so, meaning if I took more than four hits, it was back to the Hall of Doors for me. It’s just a bit jarring to be wandering through a fairly placid area, solving a few light puzzles, to be suddenly thrown into what feels like a bullet hell level.

This high difficulty made the games final act, which consists of three boss fights back-to-back, absolutely turgid. If I hadn’t been writing this review, I would have stopped playing and preserved the seven hours that preceded that because I enjoyed them so much. A stingy series of checkpoints leading to the final fight meant that I had to repeat a platforming sequence which was extremely frustrating multiple times.  I really don’t want that to be the lasting memory of my time with Death’s Door, but it’s not a good sign that when I finished the last boss, it was a sigh of relief, not a celebration of accomplishment. 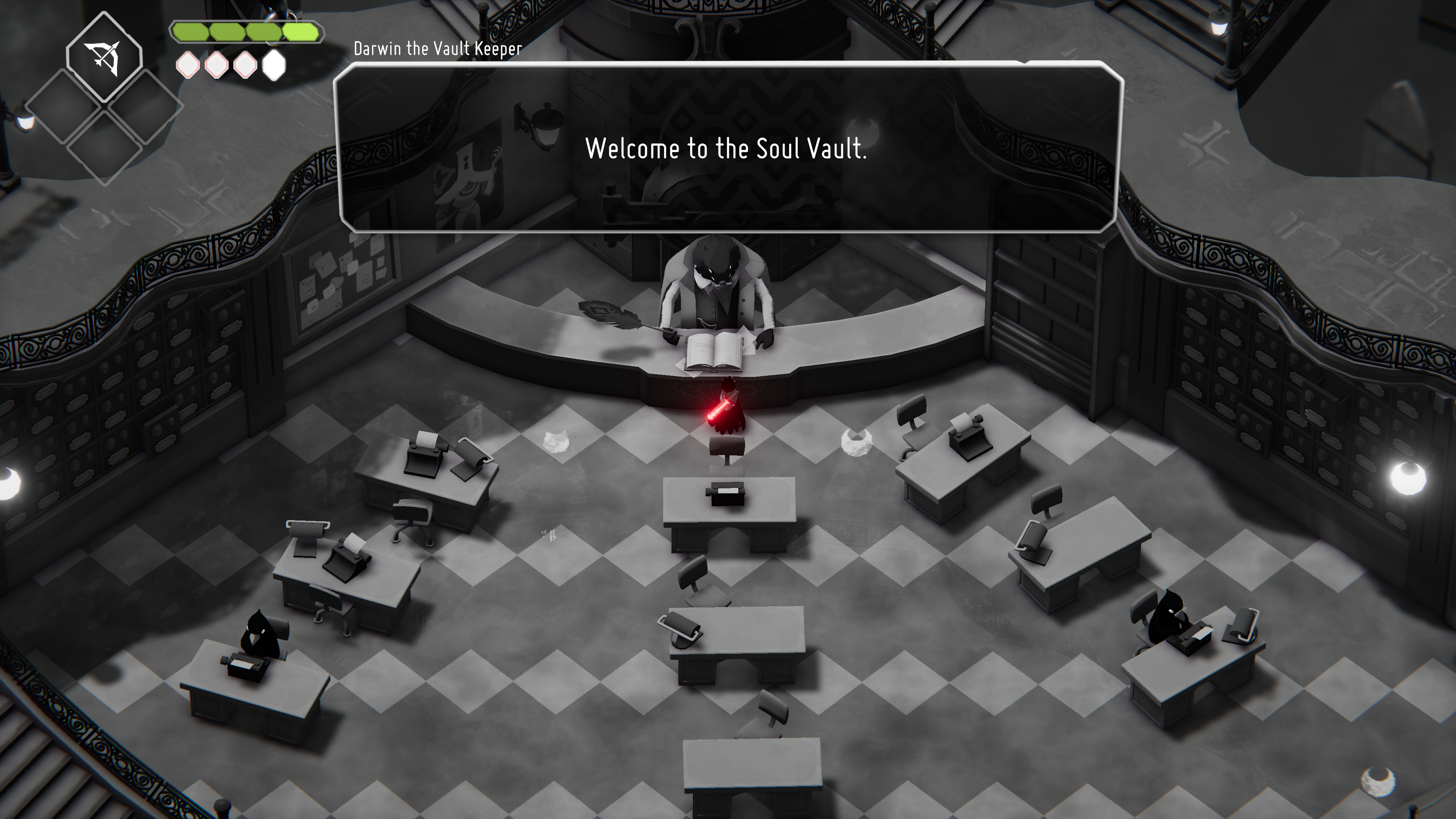 While often understated, and sometimes overshadowed by the need to concentrate on the boss in front of you, Death’s Door’s soundtrack is incredible. A mix of ambiance that you could happily sit and relax to, to epic, orchestral riffs that will have you gripping your controller so tight that you’ll damage ligaments. There are a few tracks that are destined to end up in relaxing video game music compilations, and a few of the boss melodies will be stuck in my head for some time. Although that may be because I had to hear them for longer than most musicals.

However, it’s just a bit too difficult in spots. I don’t think the combat is complex enough to handle what are extremely tough boss fights. I also don’t think you’re given enough encounters with hard enemies that are similar to the bosses to get you used to what you’re about to deal with. I think the last hour of the game really soured my experience overall. There was no need whatsoever for three boss fights in a row, especially when the final one is significantly weaker mechanically, thematically and aesthetically than the one that preceded it.

I really liked most of Death’s Door. The sense of humour suits the game perfectly and made me audibly laugh a good few times. That soundtrack is infectious and only ever compliments the scene, never steals focus. I love the characters that I’ve met. I would like a Pot Head figure for my desk just so I can have something with a similar head size to body ratio as me in figure form.