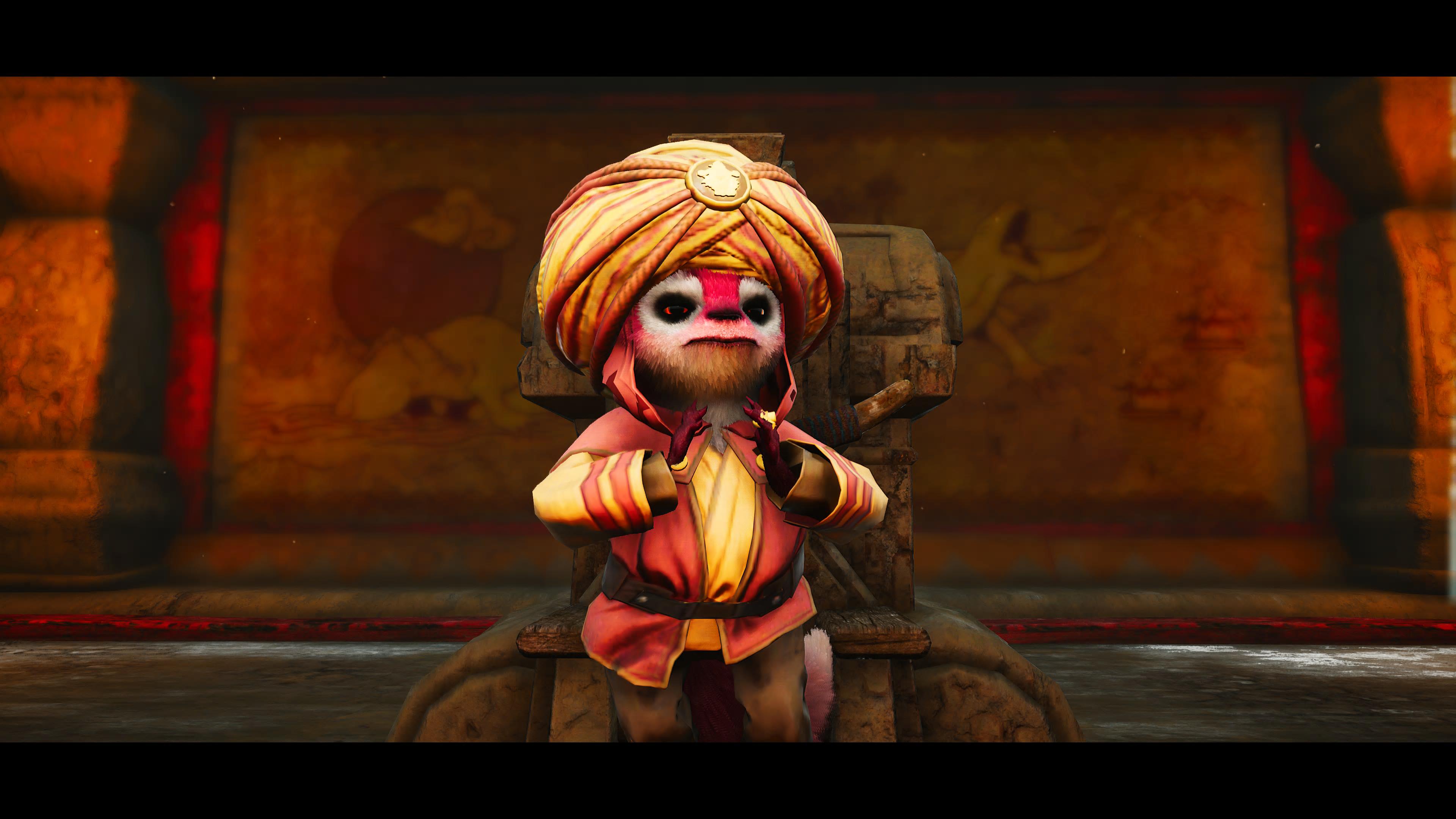 Biomutant is an incredibly underwhelming open world RPG with repetitive, dull missions and an incredibly annoying narrator. While a brilliant crafting system and inventive, colourful world design allow for some respite from it’s malaise – sluggish, frustrating combat and terrible performance on PS5 makes it an experience difficult to recommend.

Biomutant attempts to do a lot. Right from the start you’re introduced to loads of gameplay systems such as crafting, your Psi powers, “Wung-Fu”, a morality system and plenty more. Admittedly, the crafting system is very good. You’ll find random scraps of metal and equipment from the old world and you’ll be able to combine them in order to make custom weapons. There’s a huge variety of pieces to collect and customise and it really does feel like it would be difficult to make a weapon exactly like someone else playing the game. They often look ridiculous, but that kind of thrown together from old scrap aesthetic is prevalent throughout the whole world, so it certainly fits.

The combat is a combination of hack and slash melee weapons, guns and special abilities. Unfortunately, the combat never feels satisfying, and I felt a constant input delay when attempting to parry or dodge, it’s incredibly sluggish. The game wants you to combine your slashing and shooting in order to take down enemies in creative ways, but I rarely felt encouraged to do that by the combat scenarios I was placed into. Simply circling enemies and firing your infinite supply of bullets was more than enough to take down foes. Quickly, the combat goes from interesting and full of potential to an obligation that you yawn your way through. 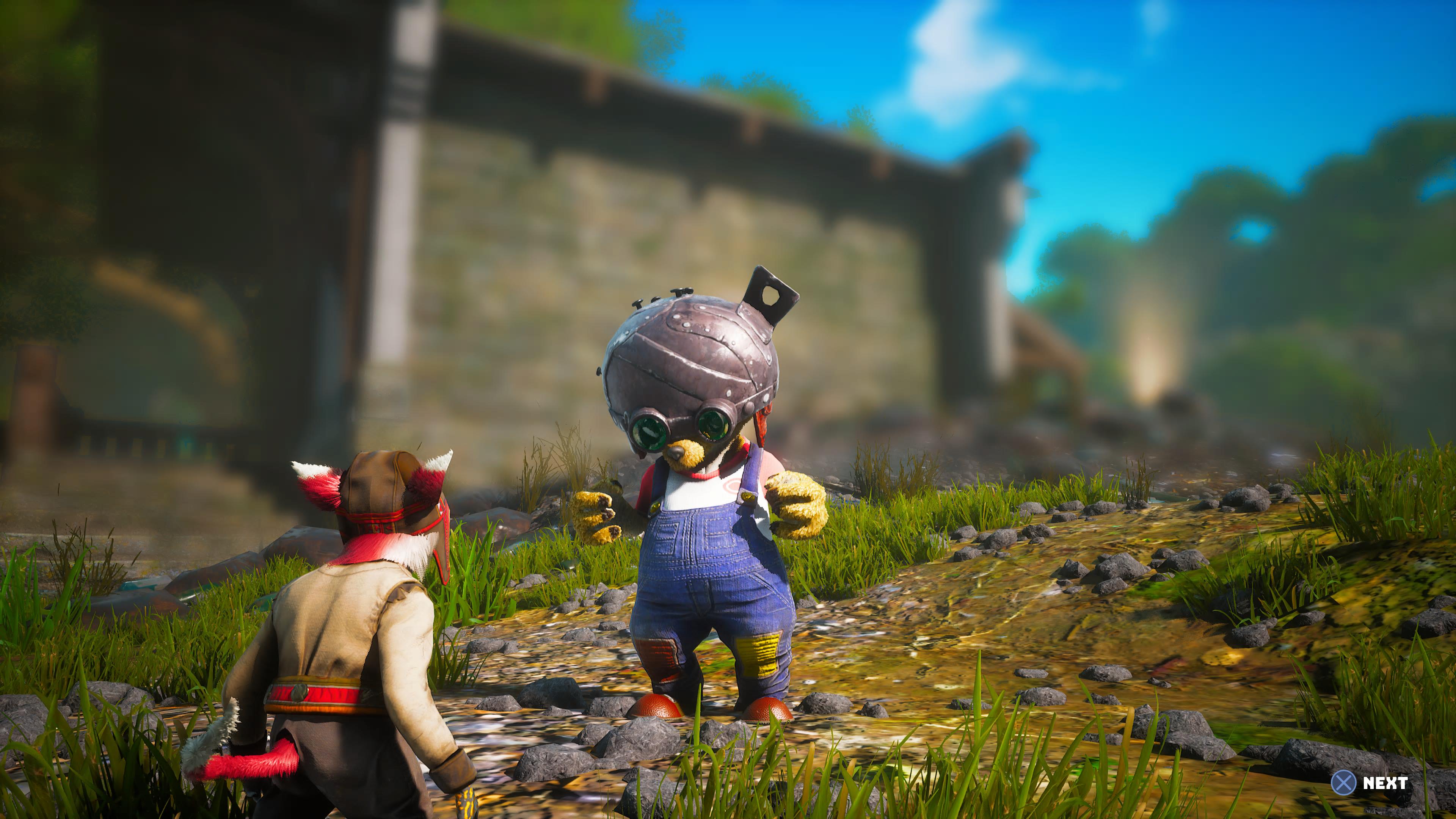 The morality system, here called “Aura” is something that could have been left out entirely. Like plenty of morality systems in games, it comes down to a child’s understanding of good versus evil, with a literal devil and angel type figure appearing when there’s a choice to be made. These choices seem to affect things like who you can choose to come with your in the final mission, but I basically only picked the good side, as I’m a paragon of virtue, and never found any consequences arising from that other than which tribe I could align myself with in the game’s main missions, but since the tribes are so incredibly copy and paste it really doesn’t matter.

The game’s main missions consist of defeating the four world eaters, behemoth-like bosses that are responsible for the general carnage in the world, and uniting or conquering the half a dozen tribes throughout the world.

The world eater fights – while unique and often used to introduce a new vehicle or mechanic you’ll rarely use after – are underwhelming and frustrating. They do a lot of damage and at least one seemed completely unbeatable until I found a way to stop it hitting me with un-dodgeable attacks that would half my health. The technique, for all my guide writers out there, was to exploit one of the game’s constant bugs and wait for the creature to get itself caught in an animation loop while I shot its arse. 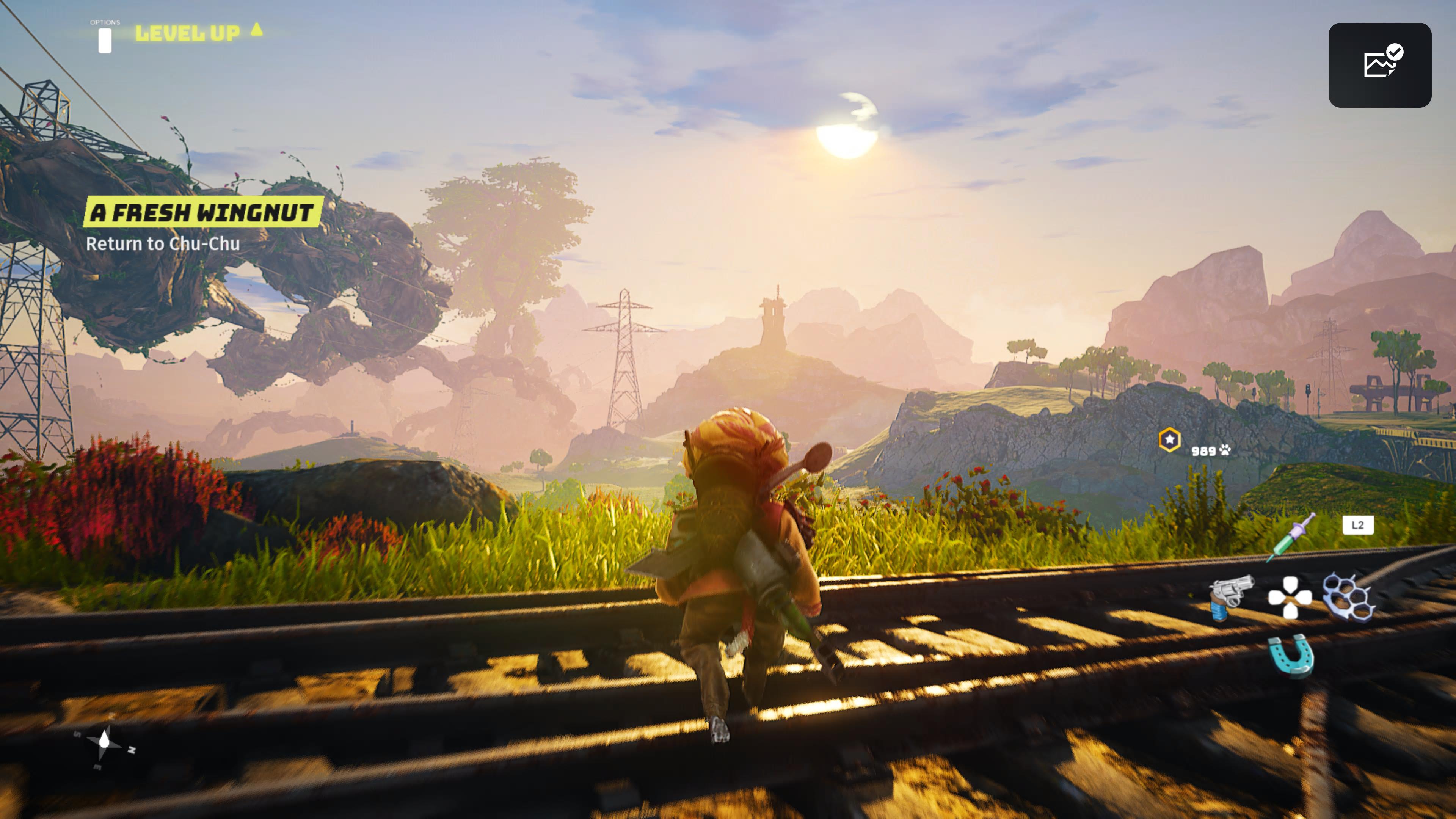 In order to conquer or unite a tribe, you first need to weaken three of its camps and then you can take on the leader. These missions are fine, but there’s very, very little variety. The game seems to acknowledge this, as after you’ve dealt with a few of them, you can literally skip the rest, presumably because the game knows you’re going to have to do the same thing over and over again and wants to spare you the boredom.

A high note for the game is the visual design which combines bright, lush colours with interesting environments. It conveys the idea of a world reclaimed by nature well, but doesn’t go down the route of hyper realism, instead cranking the saturation up and making the whole world as colourful as possible. The character models look rather dated, but it’s not very noticeable in motion, only when you’re chained to one of the overlong conversation sequences.

I implore you to go into the sound options and turn off the narrator. What begins as a pleasant voice establishing the world will soon turn into the voice you hear at night while you try to sleep. Not only does he talk constantly, the things he says make absolutely zero sense. I literally thought the game was broken because he wouldn’t shut up about how nice a day it was, despite the fact I was in an underground tunnel. The dialogue is painful enough when you only need to read it, but when it’s actually spoken it’s like listening to an audiobook designed to make you want to break your phone. The fact you can turn the frequency all the way down to never is an indication that the developers knew this would be annoying, but left it in for reasons incomprehensible to the human mind. 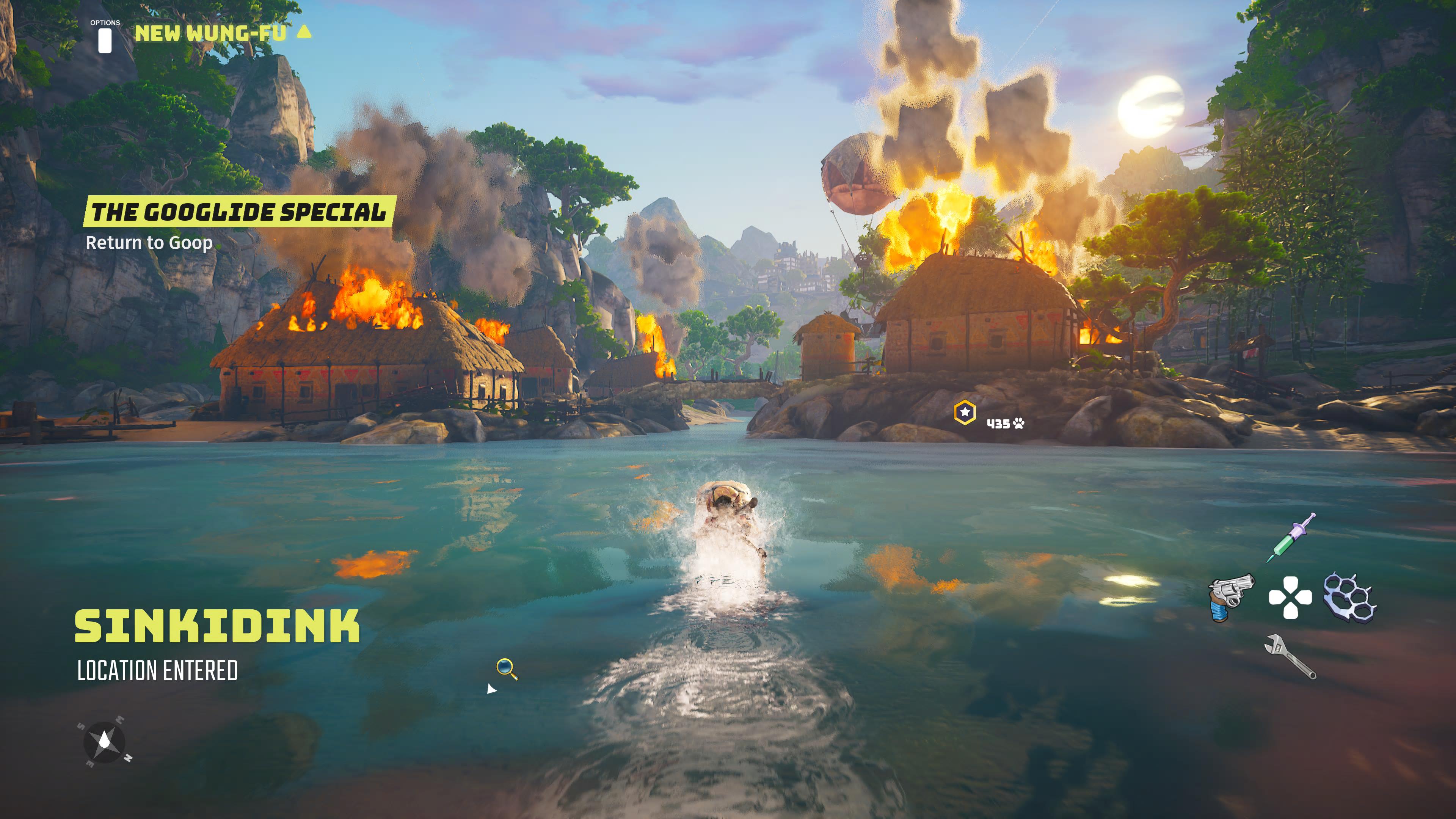 Biomutant has some serious technical issues. During my time with the game, it crashed nine times. At its worst, it was happening hourly. Not only this, but the frame rate is inconsistent, I had several instances of the game stuttering or freezing for a few seconds in its most intense moments. This is a PS4/Xbox One game. While playing on the new consoles will benefit you on the Xbox side of things, on PS5, the game runs at 1080p. While current generation versions of the game are said to be coming, no details have been released at time of writing.

While Biomutant opens with plenty of potential and a bright colourful world that begs to be explored, poor combat, a flat narrative and a lack of variety leave the game feeling extremely dated. Not to mention the constant technical problems and sluggish controls that compounded my disappointing experience. The crafting system is fantastic and there are plenty of vistas and plumes of colour that will make you stop in your tracks, but ultimately, they’re set dressing an incredibly average RPG that fails to deliver on its potential. 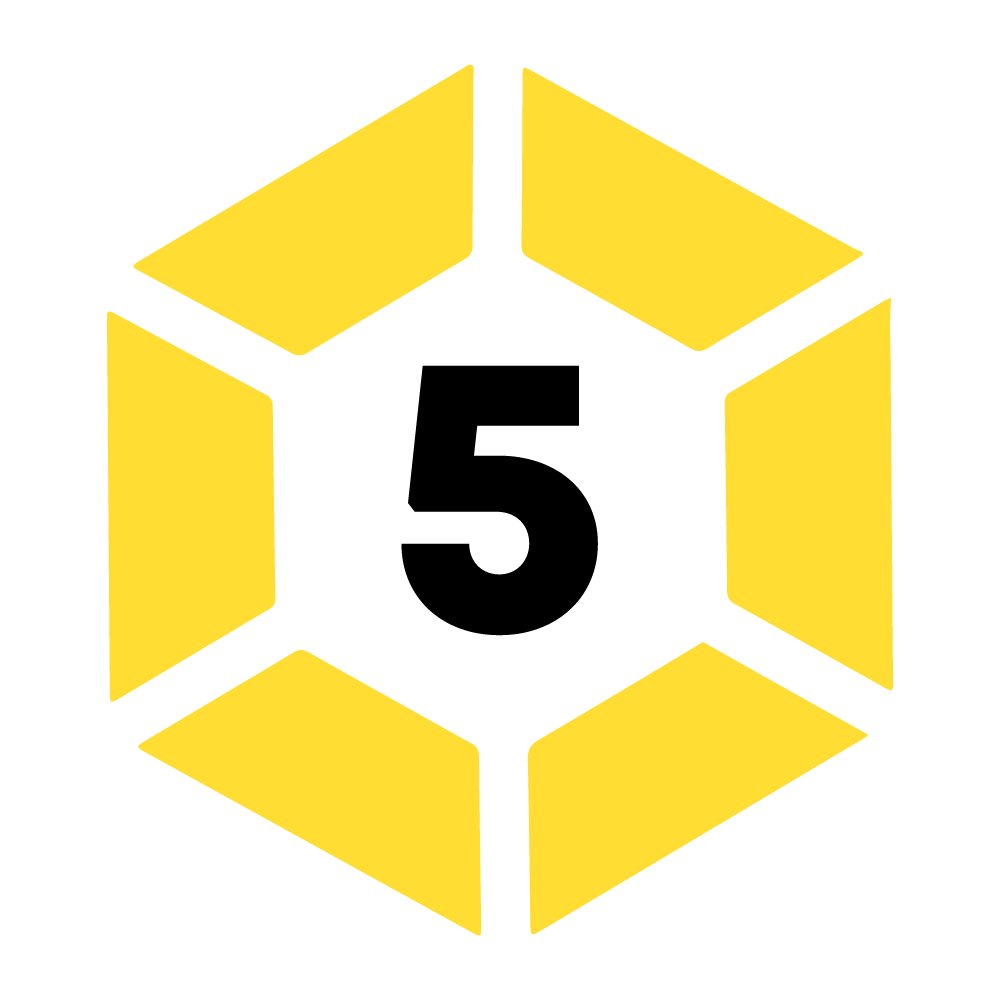